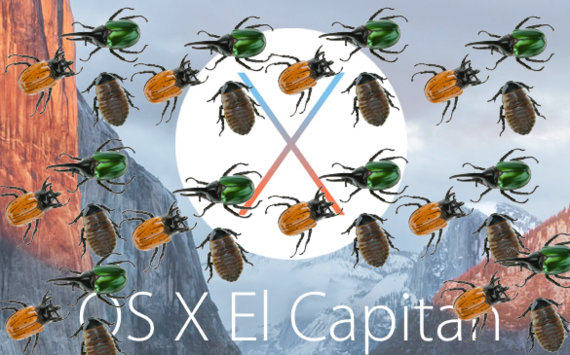 We've never met, and yet our lives are intertwined as entrepreneurs. We're both members of the tech community. You make hardware and software that I use to run my business, my family, and my life.

So allow me to share my deep-seated, honest, and important concern.

I think Apple is in trouble. And while it's not your fault, acknowledging it and addressing it is your responsibility.

Let me start by providing some objective data:

OS X El Capitan is a deployment disaster. It is the first operating system upgrade I've ever experienced that has gone horribly wrong. And I've been an Apple user since the Apple IIe - which is to say - since the beginning.

To be fair, El Capitan's series of failed releases and countless bugs matters now because so much of my electronic ecosystem relies on it.

Here's a catalog of my Apple devices:

Add another 18 if you count all the desktops and laptops I've bought for my employees. Add another 6 Apple devices if you count my family's phones, laptops, and desktops. Total of 31 devices that have been struggling desperately with El Capitan.

You know about the bugs I'm sure - but here's what you don't know.

Each and every 'update' takes me about an hour to install PER DEVICE! That means that as we're now three updates in - and I have twenty three devices, that's more than 70 hours of lost productivity and wasted time I've had to spend patching software that is core to my business, my communications, and my ability to engage in the outside world. I didn't count software for the phones or iPad since that runs on iOS9 - which hasn't been an issue.

And just so you think I'm not alone - here are the customer ratings from Apple's own site:

Every new operating system has its bugs, but El Capitan seems to have more than its fair share of show-stopping bugs. Among them -Microsoft Office 2016 constantly crashes. El Capitan is making everything run really slowly. The beach ball of death is on the screen all the time. WiFi issues abound. If you're having some problems with poor WiFi connectivity, you're not alone.

And Apple Mail is perhaps the most buggy of the buggy:

I was at the Apple Store the other day, at the genius bar, and next to me was a woman with a generations-old phone trying to make it work. Now, to the credit of the Apple employee they didn't say what I was thinking... hey, it's time to buy a new phone. But instead, Apple is trying to upgrade software, while maintaining backward compatibility with generations-old machines.

Sound familiar? Yup, sounds like Microsoft trying to get people to transition off of Windows '98 ten years later.

But here's the other thing - It feels to me like the driven, relentless, almost super-human Apple commitment to delivering perfect software and hardware has become less monomaniacal. I understand why. No one is asking you to be Steve Jobs.

But you have to hold the line on quality and reliability. So, if that means holding back an OS release for a week or so, then do that. But if you release another version of "El Crapitan" that erodes our trust in Apple, then lower cost devices that run on Android don't seem like such a bad idea.