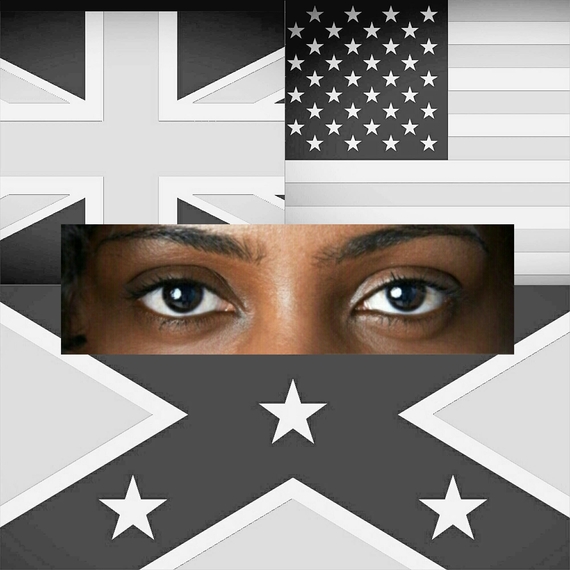 People of colour are your offspring. Yep, we are the creation of your father and mother and actually we are biological and cultural brothers.

However, people of colour are different than you. Your father hated one and loved the other.

People of African descent are actually, the oldest grouping of people on this earth. You could rightfully call us the ancients. Yes, before the first white, Chinese, Indian, Amerindian, natives of every kind and type was a black man that looked exactly like we do today; maybe a bit shorter.

However, when we were captured by your forefathers 400 years ago and brought to this new land (the Americas,' so termed) we were not allowed to continue as the elders of all humanity. We were compelled by the whip and chains to behave like children. In fact it took a few generations of slavery to form and shape black people into a new, naive, and juvenile group of people. The youngest on the planet.

When you remove the culture, religion, traditions, language, rights over one's own self-determination, stewardship of one's own body, mind, capacities, innovation. To the extent that as human beings an adult man and woman could not control their nutrition, reproduction, habitation, education, even their desire to make basic attachments to a fellow human being (for generation after generation unto 250 years). An identity vacuum is created, which will not be tolerated in nature. Ultimately, a social, spiritual, and cultural vacuum will be filled.

Accordingly, this existential void; forcefully and unnaturally created in the heart of a chattel slave was to be filled, and a new type and class of people were to be called 'black' by their parental masters who as the partial (rape) biological and social progenitors of these deracinated people were to be forever and henceforth responsible for the development and nurturing of their new born child to the point of adulthood, and then some...

Typically, daddy (massa) would refer to his child with the traditional 'boy' and 'girl' monikers associated with children. These would raise their 'not so loved' children with a iron fist for any uppity behaviours or puerile obstinacies that children do.
No back talk, like 'Sandra', no disobedience, no harsh and rebellious looks, no sassiness, talk of running away, laziness or indiscipline would be tolerated.

Daddy, would be anything, but a loving parent, in fact, at nights, daddy would kick down the door for a loving session of rape. If his son's protested, they too might be raped, brutalised, hung, quartered, tarred and feathered, burned, castrated, and then after many hours of public emasculation, and flagellation, the lynching.

Oh yes, and the lynchings of black offspring was to continue twice weekly, even unto today. Some say, every 28 hours. Then daddy, would mock us and complain when we cried, when we mourned in sorrow, when we said no, please daddy, stop! Daddy, told the neighbours that we were shifty, lazy, criminal and that we loved nothing better than to make up fantasies about how bad a father he was. There's nothing worst than an ungrateful child; daddy would say...

As a people newly born, we grew up loving our God and creator, (the white man) there was nothing left of our true parent (Africa) but a progressively fading memory. Daddy often offered to research and to document our true heritage and genealogy, but not really. In the end he made up a story about black apes, and Tarzan and how long, long ago, he saved us from our pagan parents, who were truly, savage and barbaric cannibals. They, didn't even wear clothes, and swung like monkeys from trees. He showed us a picture of a chimpanzee and asked us if there wasn't a resemblance we could see.

Many felt a bit conflicted by all this new information and struggled to become more like daddy. We believed for the first time in all of human history in a white saviour and white angles, prophets, holy kings and rulers who would save us one day, if we were faithful believers. After all, massa was kind enough to take us in despite the fact that we were eternally cursed.

So we were not exactly babies anymore but, yet to be fully grown, or to be desirous of our own identity, beliefs, traditions, ways and likes. Though we continue to do, think and behave a little like massa, we still aren't a real grown up. We're still unemployed and dependant on massa's food, clothes, discipline and correction, and we dare not play the big man in his house.

Reflecting on our childhood is now a trigger for pain, for self-hatred, for anger, for disdain. We were not well loved as children, we were unwanted, used and abused. Sometimes, daddy would even tell us to "go back to Africa".

Occasionally, we would want to reconcile, and let bygones be bygones, let sleeping dogs lie, let the water pass under the bridge; but when we visit and with love in our eyes say daddy, we are rejected, and reminded to know our place, and who is still the man in this house, and who was, and never will amount to nothing, and who doesn't deserve an inheritance, and who was lazy and a no-good criminal, and who was the ugliest of the lot, and who could never be a man like.... Daddy.

The writer is by no means suggesting that Great Britain does not have its own issues racially, but given the history and climate here in America he felt the need to speak to it, as he has so eloquently.