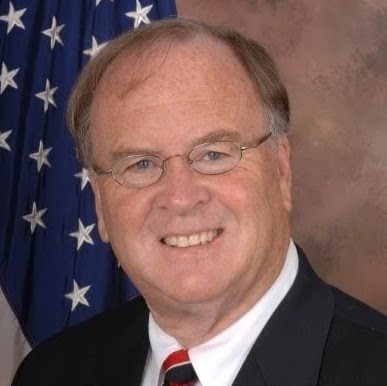 I spent my early years in Santa Cruz county digging into the organic food movement through hard work and elbow grease at Community Foods. I had my head down stocking local Swanton berries, Betty's bodacious Bings, the Russel's brilliant leaf lettuce and Mark Lipson's outrageous dry farm tomatoes. I had no time or sensibility for politics or policy, I just knew the trucks had to be unloaded by hand and the customers satisfied with fresh organic produce by the hour. It was to be much later that I realized there was an unflagging champion in my very own district working hard on the state and national level to further organic. His name is Sam Farr.

Sam Farr is the California 20th district's longest serving member of Congress, my bio-region, the Central Coast of California. He's the district's longest serving member of Congress since he was elected in 1993 and a strong supporter of the organic industry for more than three decades. While I was stocking burdock root and beets, Sam Farr was a bold outspoken supporter of organic regulations and growth.

He is a fifth-generation Californian and the son of the avid environmentalist and State Senator, Fred Farr. Sam grew up in the Carmel Valley, near the fertile Salinas Valley, with a deep regard for agriculture and its people. His father made history when he passed a bill requiring portable toilets in the fields for California farm workers. To this day, the contractors in the Salinas Valley affectionately call porta-potties "Farr's Chariots."

Sam's career in public service dates back to 1964 when he was a Peace Corps volunteer in Colombia, where he acquired an affinity for exotic food, people and diverse culture. It was in the California State Assembly that he first became an organic champion when he successfully authored the 1990 California Organic Standards Act, the first state law to define organic agriculture. Before this Act, anyone could slap an organic label on a package and voila; it really didn't mean anything because there was no definition, no regulations, and no enforcement. With the help of several California farmers (Mark Lipson leading the charge), Sam changed that forever with the California Organic Standards. There were lobbyists who would have liked to have had these early regulations watered down... no three-year transition period was proposed... Sam held his ground and said the bill would die before he made any damaging concessions or changes that weakened it. The bill passed intact and history was made.

At around the same, Senator Patrick Leahy (D-VT) introduced a similar bill in the United States Congress to enact National Organic Regulations. When Sam went to Congress and served on the Appropriations Committee in 1999, they had not yet adopted the final rules for the Leahy bill, even though it had been passed in 1990. When he realized this, he told the then Secretary of Agriculture Dan Glickman, "I'm not interested in even having you get paid for your job unless you finally get that department to promulgate the rules to adopt the organic legislation that's been sitting here for nine years waiting for your department to act."

The USDA immediately set up a rule-making committee that came up with the first set of recommendations. The first draft received over 270,000 comments, more than any received to this day. The Organic Foods Production Act of 1990 was finally published in the public register in 2000 thanks to Sam Farr's perseverance, tenacity and guidance.

In 2003, Sam Farr with the aid of Bob Scowcroft, the Executive Director of OFRF, helped form the Congressional Organic Agriculture Caucus. Sam wanted a vehicle for members of Congress to come together and promote organic policies. He had a vision of a bipartisan association of congressional members that would educate Congress Members and their staff on organic: farming methods, what the term "organic" really means, what the USDA National Organic Program does, how the industry is growing and what challenges abound for organic farms and businesses.

Over the years, Sam Farr has successfully championed funding for programs critical to the organic sector, such as the National Organic Program, as well as research and data collection. The double digit growth of the organic sector over the last two decades can be traced back to Congressman Farr's support of the regulations, research and market data collection. His dedicated focus has enabled the industry to grow, create jobs and provide consumer choice in the marketplace.

In 2012 during OTA's Policy Conference & Hill Visit Days, I was honored to present Congressman Farr with the Organic Trade Association's (OTA) Public Servant Award. It represented his three decades of unwavering support and advocacy for organic farmers and the organic sector. We had both traveled on different paths to get on that stage and his was the path of organic vision, the Farr side!

This November, Congressman Sam Farr announced that he won't be seeking reelection in 2016 and will be retiring form public service in January 2017. While we will sorely miss his organic leadership in Washington, he certainly deserves to fully enjoy the pleasures and beauty of the central coast.
It isn't often that someone stands out with so many years of dedicated achievement. Sam Farr is one individual that everyone who is involved in or touched by organic food and fiber should hold with immense respect. I invite you to take a walk on the Farr side and send him your organic thanks and appreciation on Facebook for his decades of work.

To Quote Mark Lipson: "It is no exaggeration to say that Sam Farr has been singularly important to the establishment and growth of ecological agriculture in the U.S. He owns the creation of USDA organic research and extension, and nurtured its funding, year after year no matter what. He is both the nicest man in national politics and a man of steel in defending human decency and environmental harmony. Thank you Sam!"

Thank you Sam, you will be missed and never forgotten, see you on the beach!

You can read more organic tales of Sam Farr and many others (some mentioned in this piece) via the University of California's oral history project, "Cultivating a Movement: Organic & Sustainable Farming."