Those of us living in what we consider free societies often feel secure that if we comply by laws, pay our taxes, and maintain other civic duties we should not live in fear of government officials entering our homes and disrupting our families. 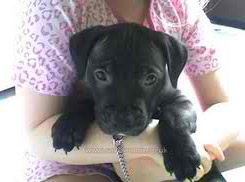 Not so in Belfast, Northern Ireland, where a tragic situation that is nothing short of Orwellian has played out for over two years. Lennox, a Labrador/American Bulldog mix, was seized from the Barnes family under the U.K.'s "Dangerous Dogs Act" (DDA) and sentenced to death due simply to his physical measurements. Under the DDA, if a dog's measurements are in line with their standard for "pit bull types", the dog can be seized without warrant and sentenced to death (a recent amendment stipulates the that the dog must also be proven dangerous). The DDA assumption that physical traits dictate a dog's behavioral tendencies is contradicted by well known dog experts and virtually every major veterinary, animal control, and emergency medical associations worldwide - all of whom have spoken out against these laws .

It's hard to image a more unlikely target for the law than the Barnes family. Lennox is an American Bulldog/Labrador mix who had never been reported for any act of aggression, and in fact had never exhibited a single sign of misbehavior. He is not only a family pet, but has served as a therapy dog and soulmate for a disabled girl, Brook Barnes, who is now 13. Lennox's family had provided a stable, loving home environment. He had been microchipped, neutered, DNA registered, insured, and even had a valid city-issued dog license. By all accounts, Caroline Barnes, a former veterinary nurse, is a model pet owner. 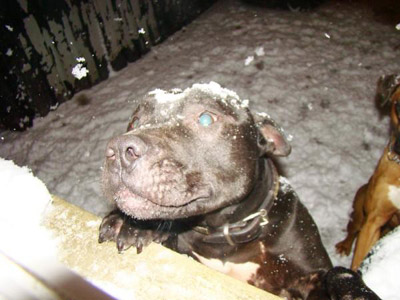 Yet on May 19, 2010, the City of Belfast saw fit to turn their world upside down, in the most baffling way imaginable: Two dog wardens (who operate under the auspices of Belfast City Council) came knocking at the Barnes door bearing a warrant with an entirely different address; it's still unclear whether the visit was a simple mistake or prompted by Ms. Barnes' recently renewing the city dog license. The Barnes related that after smoking cigarettes and pleasantly chatting over tea, they produced a tape with which they measured Lennox; they then announced they were seizing him because, by their assessment of his measurements, he was "of type.*

That was nearly two years ago. Since then, in spite of massive worldwide outcry, including pleas from noted dog behavioral experts and celebrities, a petition that now bears over 127,000 signatures, and a growing "Boycott Belfast" movement, Lennox has been held in a secret location while the family pitches a desperate legal battle for his life.

It's no exaggeration to say that prosecution case against Lennox has been rife with inconsistencies, errors, and even accusations of perjury. The absurd twists and cast of characters could make this case darkly comic -- Samuel Butler or Dickens would have had a romp with it -- if it didn't ultimately hinge on one innocent life, and the suffering of a heartbroken girl.

One would think the case would have been put to bed in September 2011, after two expert animal behaviorists, Sarah Fisher and David Ryan, presented the results of their separate, extensive evaluations of Lennox. Both came to the conclusion that Lennox is friendly and of no danger, and presented these reports to the court.

Inexplicably, the judge dismissed those evaluations, and instead relied on the opinion of one Peter Tallack, a police dog handler and noted supporter of the DDA, whose official role in the case was simply "breed identifier." In a quirky bit of testimony, a flustered Tallack offered the opinion that Lennox was "waiting to go off,"

Apparently using this as the basis, Judge Rodgers called Lennox "a disaster waiting to happen" in a ruling that upheld Lennox's death sentence not on the basis of any past or current behavior, but on a projection that he might be aggressive at some point in the future. (Imagine if a human defendant were convicted on these grounds!)

When the defense appealed again in late January of this year, the case was reviewed by the very same Judge Rodgers, who - surprise - chose not to overturn his own ruling.

Outrage sums up the reaction of Victoria Stilwell, celebrity dog trainer and host of the program "It's Me or the Dog," with whom I spoke earlier this year. Stilwell has been outspoken in her support for Lennox, devoting a number of articles and a podcast to it, and against breed specific legislation in general (which she sums up as "addressing the wrong end of the leash"). Stilwell has studied the video assessments of Lennox and reviewed Sarah Fisher's report, and simply can't believe the judge would have taken the word of Tallack - who is, by his own admission, not a behaviorist - over the the opinions of two highly regarded professionals.

Concurring with Stilwell is Jim Crosby, a dog trainer and expert in canine aggression. By his account, he has personally assessed more dogs involved in fatal attacks than anyone else on the planet. He stresses that breed is most certainly not a factor in determining whether a dog is dangerous or not; it is the individual characteristics of a dog. This is a man who knows aggressive animals, and he cries foul in the Lennox case. "This poor dog didn't do anything, he was minding his own business, happily at home," he said in a January conversation. "That's the baffling thing."

Also like Stilwell, Crosby questions why the testimony of Tallack, a police dog handler, was given credence by the judge. He says to have someone with Tallack's highly focused skill set evaluate a family dog like Lennox for aggressive tendencies is "like asking a guy who works on Piper plane to repair the space shuttle." It's a very different type of dog in a completely different situation.

Both Stilwell and Crosby continue to speak out passionately about the Lennox case, and Stilwell has especially expressed alarm over evidence that Lennox's health is deteriorating further, based on photo evidence showing massive hair loss and sores. 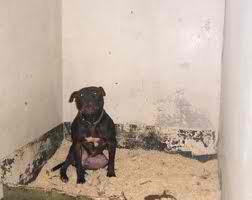 A final appeal to high court is set for May 24. If it is ruled that Lennox cannot be returned to his family, the defense is asking at least to allow a friendly party in the Republic of Ireland (where there is no breed specific legislation) to adopt him.

Meanwhile, somewhere in Belfast, a family's beloved pet - a dog who has never spent so much as a day in a boarding kennel -- remains locked in a small dank cell surrounded by sawdust and feces, a victim of misused policy and a few humans who would rather see him put to death than admit a mistake. Now, that's a crime.