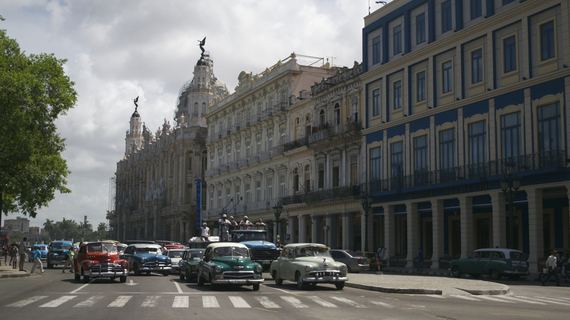 A couple of enterprising young men in Cuba have launched the closest thing the island will have to Uber for the time being -- yotellevocuba.com. (Translated, "I will take you"). It's simply a way of contacting an organized community of drivers via email at this point, but with the state-run cellular provider ETECSA reportedly poised to start offering data packages on the island in the near future, it's not out of the realm of possibility that such a site could look more like the real Uber down the road.

The founders say they have corralled a couple dozen independent drivers on the island with access to email (still a rarity, they admit) and for each fare request, customers will get a quote from three different drivers. "Hiring a taxi driver at YoTeLlevo is something special," they write gushingly on the site. "You're not hiring a driver, you are making a friend who has a taxi and can be your driver -- even when you have to pay."

Reached via email, the young CEO of Yotellevo -- who works for a state-owned software company in a provincial city -- said one of the main goals is to connect foreign tourists with drivers ahead of time so they know how much things will cost when they get there. He makes money off commissions from the drivers.

The young man, who asked to remain anonymous, says it's just a team of three so far (him, his brother in Havana, and a friend), along with a cousin in Texas who registered the domain and is paying for the hosting. He says all the drivers are experienced ones -- former accountants, retired pilots, ex-fishermen and the like -- and are based all over the island. Lining up the drivers was not easy, he says.

"I've been in the streets convincing them, but also found some by emailing them directly," he writes. "Of course many of them don't have an email account. Also many of them are used to be hired the moment of the ride and are not willing to try us. I've discovered some driver's emails because they promote themselves at some listings sites (revolico, porlalivre, etc). Not all respond, but getting a response is a way of confirming they can use the emails and are willing to give our system a try. Also I check that they are nice people by exchanging emails with them and sharing a few rules."

Keeping an app alive from the island, given the nature of the internet connection there, is also quite a chore.

"The conditions for the Internet access are precarious," he says. "I use an account I have from my organization to surf the web and do some things I need to do, but of course this is under the hood. Also this connection is very slow and unstable (right now I'm using it to write to you). To access the server and do updates to the app, I ask for favors to a journalist friend of mine so I can use her account; I have to go to her house and connect from there, always in a hurry so I don't consume much of her time."