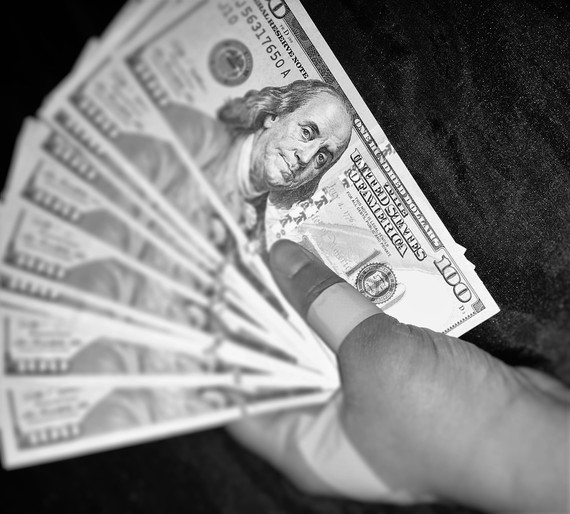 In their 1973 song "For the Love of Money," the O'Jays--a black R&B soul/funk group out of Canton, Ohio--sing about the almighty dollar. For and with money, people "do things, do things, bad things," as the lyrics go. Even though the track was released nearly 43 years ago, its overarching message is strangely applicable today, especially given recent developments regarding Ohio and money--that "mean green"--involving Tamir Rice.

The city of Cleveland reached a $6 million settlement in a lawsuit over the death of Rice, a 12-year old black boy shot by a white officer at a recreational center playground in November 2014. Though the city accepts no admission of police wrongdoing in the fatal encounter, that it will pay $5.5 million to Tamir Rice's estate and $250,000 to his mother and sister, respectively, speaks volumes. "Although historic in financial terms," a Rice family lawyer noted in a statement, "no amount of money can adequately compensate for the loss of a life." This is undeniably so. We cannot quantify nor should we place a monetary value on any human life whatever the race, color, or complexion. Period.

Yet, there are many instances that appear to do just that. As Jamil Smith notes, "$6 million is about the going rate for a black life ended by the police." The assessment is based on payments cities agreed to pay the families of Eric Garner ($5.9 million by New York City), Freddie Gray ($6.4 million by the city of Baltimore), and Walter Scott ($6.5 million by the city of North Charleston, SC)--all cases in which police killed black men. In the case of Rekia Boyd, a 22-year old black woman fatally shot and killed by an officer, the Chicago City Council approved a lower settlement of $4.5 million.

None of these remotely suggests that justice, by any stretch of the word or imagination, has been served. There is no question about that. What this occasions, then, is an opportunity--one that should not be missed--to ponder the irony, implicit and otherwise, of determining and assessing the "cost" of black life. Consider the nexus and historical dynamics governing African Americans--black bodies--and money or capital(ism). Until 1865, enslaved blacks were chattel and unpaid laborers, to say the least. As property, their relationship to money and value was precarious. Blacks simultaneously held (property) value--an actual sale or market price based on variables, such as skills, age, utility, reproductive capacities--and also in the sense that their very labor yielded capital; in fact, some were too valuable for dangerous work. Yet, black life in and of itself held practically no value. The reality was that blacks could be discarded and killed with impunity and, mostly, without consequence. If there were ramifications, these were typically grounded in the overarching notion that the punishment was not for taking a life--killing a black person--but, rather, was property damage.

The multi-million-dollar settlement involving police in the death of a black person lends itself to larger overarching questions. What does it mean for blacks--who generated money through production, their free labor, and reproduction (by populating more free laborers and the American economy)--to now garner money in police or state-involved deaths? And have blacks in such instances of settlements gone from a past of being "money"--as actual collateral--to being "collateral" damages?

In the 1830s to the Civil War, banks served plantations and accepted enslaved blacks as collateral for mortgages, equipment, land, and for other enslaved individuals. In Louisiana, Citizens Bank and Canal Bank (non-extant predecessors of J.P. Morgan Chase) were widely known for such practices. Just over a decade ago, in 2005, J.P. Morgan issued an apology "to the African-American community, particularly descendants of slaves, and to the rest of the American public for the role that Citizens Bank and Canal Bank played" in "a brutal and unjust system." In essence, their actions dehumanized and monetized blacks while simultaneously enabling the system of slavery--human bondage--to flourish and continue to exist. Perhaps, like Chase, one day other entities and cities, such as Cleveland, will admit their culpability and, equally important, will condemn and cease the deadly acts and behaviors (still normalized in the system) that account for the devaluation and death of black lives. Ideally, we might live in a world in which there is no violence, whether by police or citizens, against folks because of race, gender (conforming or non-conforming), or on any other basis.

That one might estimate, then, the "going rate" of black life at the hands of police at roughly $6 million is provocative. Moreover, that the U.S. Treasury has also recently announced that Harriet Tubman--a formerly enslaved black woman and abolitionist known as "Moses" for her active role in emancipating scores of enslaved blacks--will be on the $20 bill is historic and consequential, and--in a sense--perhaps even "manifest destiny". Imagine that. The same government that prospered from the enslavement and state-sanctioned rape and sexual exploitations of black women to produce the (slave) economy is now the very same one that will afford a black woman the status of being on money instead of serving as or producing it.

The photo is the author's own