This is a story that will restore your faith in foreign aid. But it may also break your heart.

For the past year, I have worked, mostly on a voluntary basis, with CABDICO, a local Cambodian non-profit organization working with people with disabilities. They had identified that there was a huge need for Speech Therapy in Cambodia. The population that this profession aims to treat are people with communication and swallowing disorders.

Think about how much communication is an essential part of your life. Any time you want something, you speak up and ask. This is the way you interact with friends and family, colleagues and the guy who makes your coffee. Now think about what your life would be like if you had all of this stripped away from you. Think about the impact this might have on what you could or couldn't do.

Imagine if every time you reached for a glass of water, you couldn't swallow it properly. Imagine the feeling of it entering your trachea and then lungs, but even worse than that, the thought that this meant that you are 13 times more likely to die before your time was up.

Now imagine you are in a school of 1000 Cambodian children. 40 of these kids are experiencing one of these two problems right now. 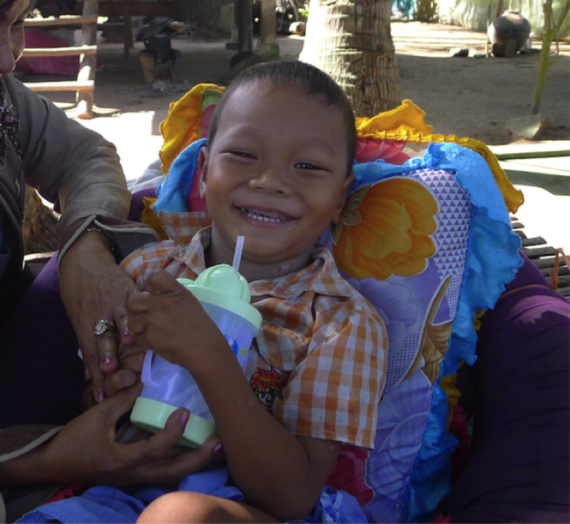 Meas Mai has a swallowing disorder as a result of cerebral palsy. He has already been able to benefit from Speech Therapy. Image by Weh Yeoh.

This is the reality for over 600,000 people in Cambodia, yet services are hugely lacking. As importantly, knowledge at both a national and community level on how to deal with the problem is low. We don't have good data, but out of the 600,000 people who require Speech Therapy, a good estimate is that less than 1,000 are receiving some form of it.

People are dying. No one will be able to tell you exactly how many, because the data is so sparse. But thousands are dying because swallowing disorders can lead to pneumonia, when food or liquid enters the lungs instead of the stomach.

The economic cost of this under servicing of population is also huge. Research in the UK has shown that for every £1 spent in Speech Therapy services for people with swallowing problem, we can save £2.3 in health care cost savings through avoided cases of pneumonias. By assessing the loss of income associated with having a communication disorder, and comparing this to the cost of medical, rehabilitation and special education care for children with communication disorders, it is estimated that in the U.S., this accounts for 2.5-3 percent loss of Gross National Product (GNP). In Cambodia, this is equivalent to almost $400 million in lost GNP every year.

After close to a year of searching, I was able to help CABDICO secure funds through the Australian Embassy and through a crowdfunding campaign for a pilot program that would train their staff in basic Speech Therapy skills. The aim of this program is to show that Speech Therapy can work in a Cambodian context, using Cambodian language and Cambodian people, thus decreasing their reliance on outside expertise and aid.

So far, in less than six months, we have been able to achieve the following results:

● 7 CABDICO staff and 30 local teachers have learnt strategies to improve the communication and swallowing of children with disabilities.

● Over 100 children have already benefitted from this increased knowledge.

● Members of the Cambodian Government, such as those from the Ministry of Health and Education, have gathered together to discuss and plan out the future of Speech Therapy in Cambodia.

● Front page coverage of this population appeared in a national newspaper.

● The University of Health Sciences in Phnom Penh, Cambodia, have agreed in principle to start a Speech Therapy course.

● We successfully lobbied to have Speech Therapy explicitly mentioned in the National Disability Strategic Plan, adopted by government for the next 5 years.

The huge gap, which existed for over 600,000 people with a communication and swallowing disorder, has begun to be filled. 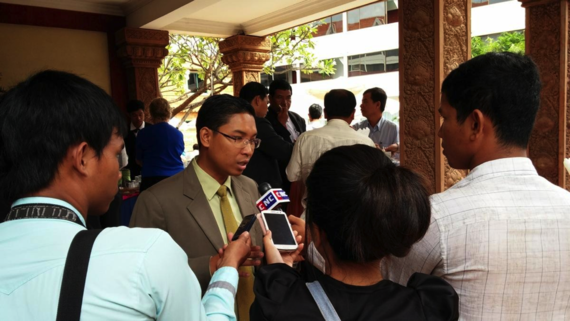 DAC Secretary-General Em Chan Makara answers questions from the Cambodian media on the need for Speech Therapy in country. Image by Weh Yeoh.

I am constantly humbled by CABDICO's passion to do good work with utmost efficiency. When we organised a workshop in December 2013, CABDICO staff came from the provincial office to Phnom Penh to join. The standard practice is to give them a small amount of money, known as a per diem, to cover their food and accommodation expenses whilst in town. I placed a line in the budget for US$16 to cover three meals and a night in a hotel per person per day. When a CABDICO staff member saw this, he immediately objected and told me to lower it to US$14.

Knowing that CABDICO staff work incredibly hard for very low wages, I didn't feel that this was necessary, but my counterpart insisted.

"No," he said emphatically. "We cannot afford to waste money we've been given."

To put this in perspective, the comparative rate that United Nations consultants receive is US$116 a day, more than eight times higher than what CABDICO was willing to offer. Despite this cost efficiency, CABDICO itself is going through hard financial times, such is the dearth of funding in disability in Cambodia at the moment. Staff have voluntarily taken pay cuts to keep the organization running on whatever little private funds they have. The Executive Director himself was taking the biggest pay cut, of over 25 percent.

It makes me sad to see staff that are only paid as little as $350 a month, making personal sacrifices to do the work that they believe in. I'm a big believer in sacrificing everything you possibly can, including financial security, if you are doing something worthwhile. But come the end of June 2014, we will have to abandon this project if we cannot find further funds to continue.

We have before us a project that ticks all the boxes. Enormous under-serviced population. Small local organization with very little finances yet very high motivation. Extremely high impact for minimal outlay. Government and large multilateral staff starting to pay attention to the need. Results. Proven results.

We have a plan to continue this good work, just not the resources to carry it out. I'm asking you, the reader, to help us find a solution to continue the progress we've already made.

Any help, connections, contacts or ideas would be welcome. Please email me:

Collectively, are we able to recognize when we are onto something good?