I know that it may come as a shock to some, but New York's Central Park is not an act of God.

It might seem that way, especially in the woodlands, which appear so authentically, well, natural. But, no - Frederick Law Olmsted, Sr. and Calvert Vaux designed Central Park and construction began in 1858. 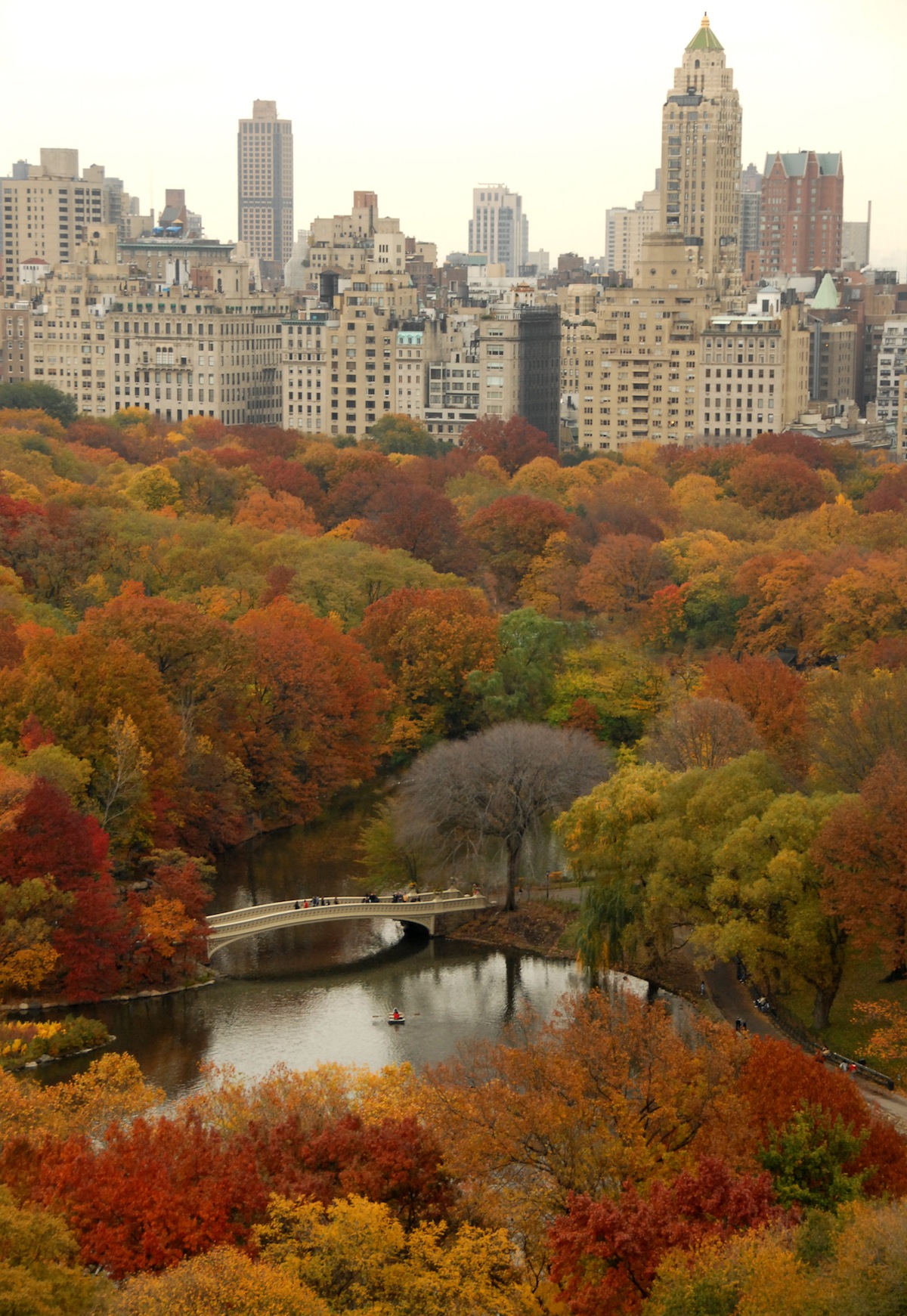 Aerial view of Central Park with Bow Bridge in the foreground. Bow Bridge spans the Lake at the heart of the Park, leading to the Ramble. Image courtesy the Central Park Conservancy.

Their masterwork engineered and manipulated an undistinguished landscape, transforming swamps into serene lakes and sculpting sparsely vegetated flats into rolling meadows and picturesque woodland ravines and rambles. They wanted to create a retreat from the city that would stir visitors' imagination with "an unlimited range of rural conditions." 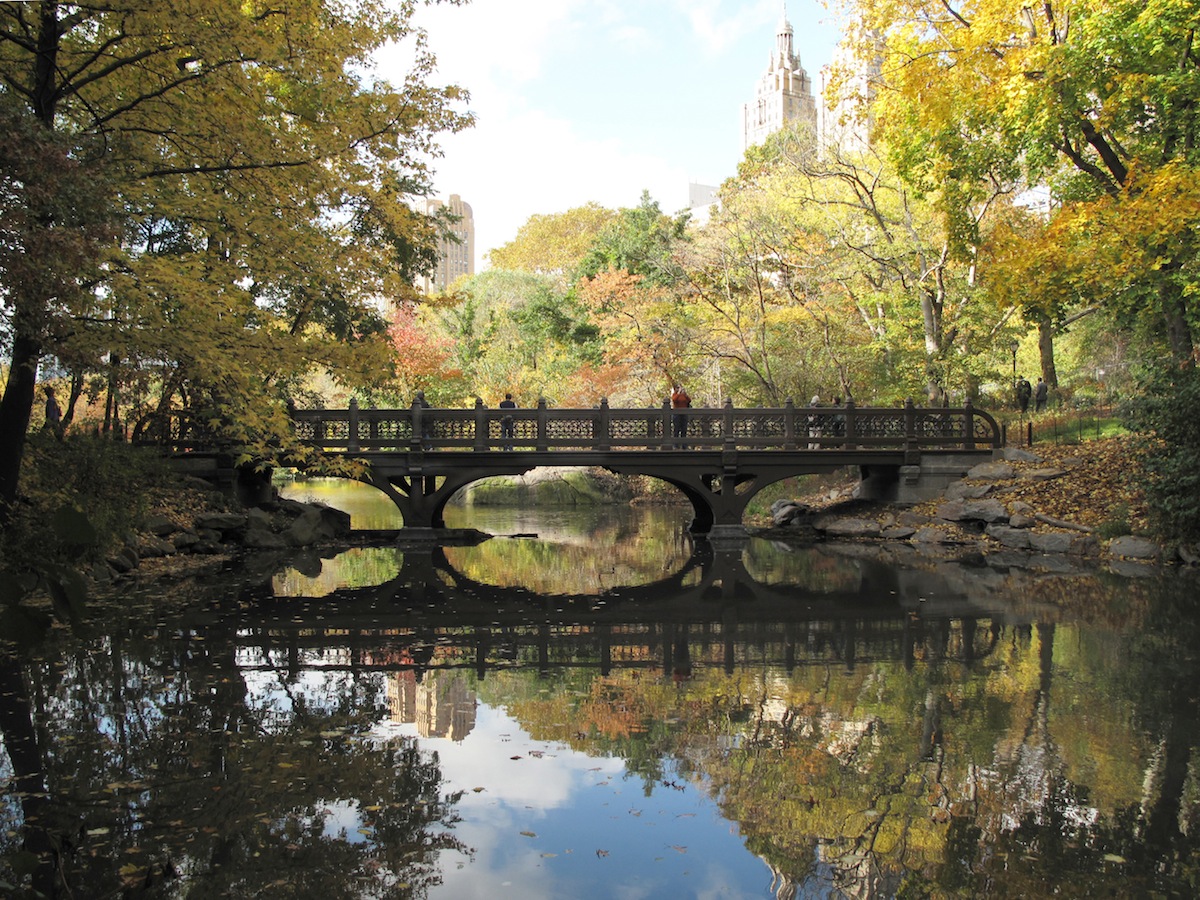 Why does this matter? The park requires constant maintenance and management - and lots of it (well beyond trash pick up and mowing the Great Lawn). There are views and vistas to be maintained, invasive species to be monitored and removed, shorelines, paths, and infrastructure to be rebuilt - constant attention to complex ecosystems - in short, managing nature. Then there are the park's constituents - joggers, bike riders, bird watchers, dog walkers, ball players, nature lovers and others - each of whom feel they have a stake and a say in how the park's management affects their cultural use.

Why should we care? Well, if you're a New Yorker you likely make everything about the city your business. But issues of guiding and managing change, who gets to decide and measuring success are playing out around the country. Don't believe me? Type "tree cutting controversy" into Google and you get 6,520,000 results. The issue was adroitly addressed in this editorial:

[This] "is not a question of sentiment, but of life and death. The neglected park becomes a wilderness, the garden runs to noxious weeds, and the shrubbery is a tangle of briers and bare stems. We are not wholly insensible to the beauty of untamed nature."

That's from Sentimentalism and Tree-Felling written in 1893 (in the influential journal Garden and Forest), so clearly this is not a new problem. The editorial goes on to say:

"[W]herever civilized man steps in to clear the land he must have some orderly design. He must encourage growth here by draining and watering, by trenching and feeding; he must check growth there by a vigorous use of axe and pruning-hook."

That quote's starchy language notwithstanding, the message applies today. However, balancing the needs and demands of nature and culture is tricky. Among its many design features, Central Park was created to have picturesque views from carefully scripted vantage points, but several - such as the view Olmsted and Vaux created from the south shore of the Ramble to Bethesda Terrace - are now overgrown and obstructed. 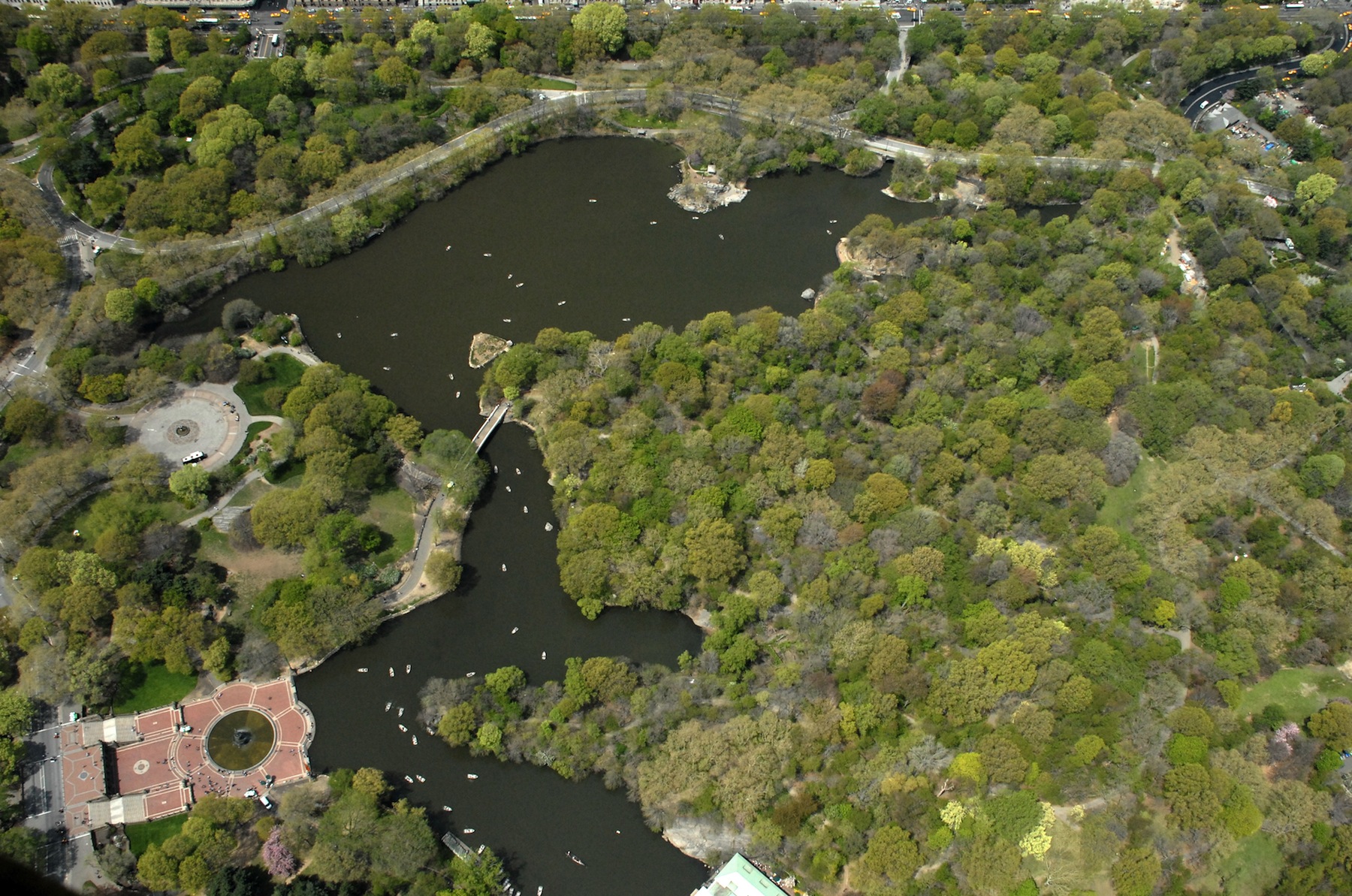 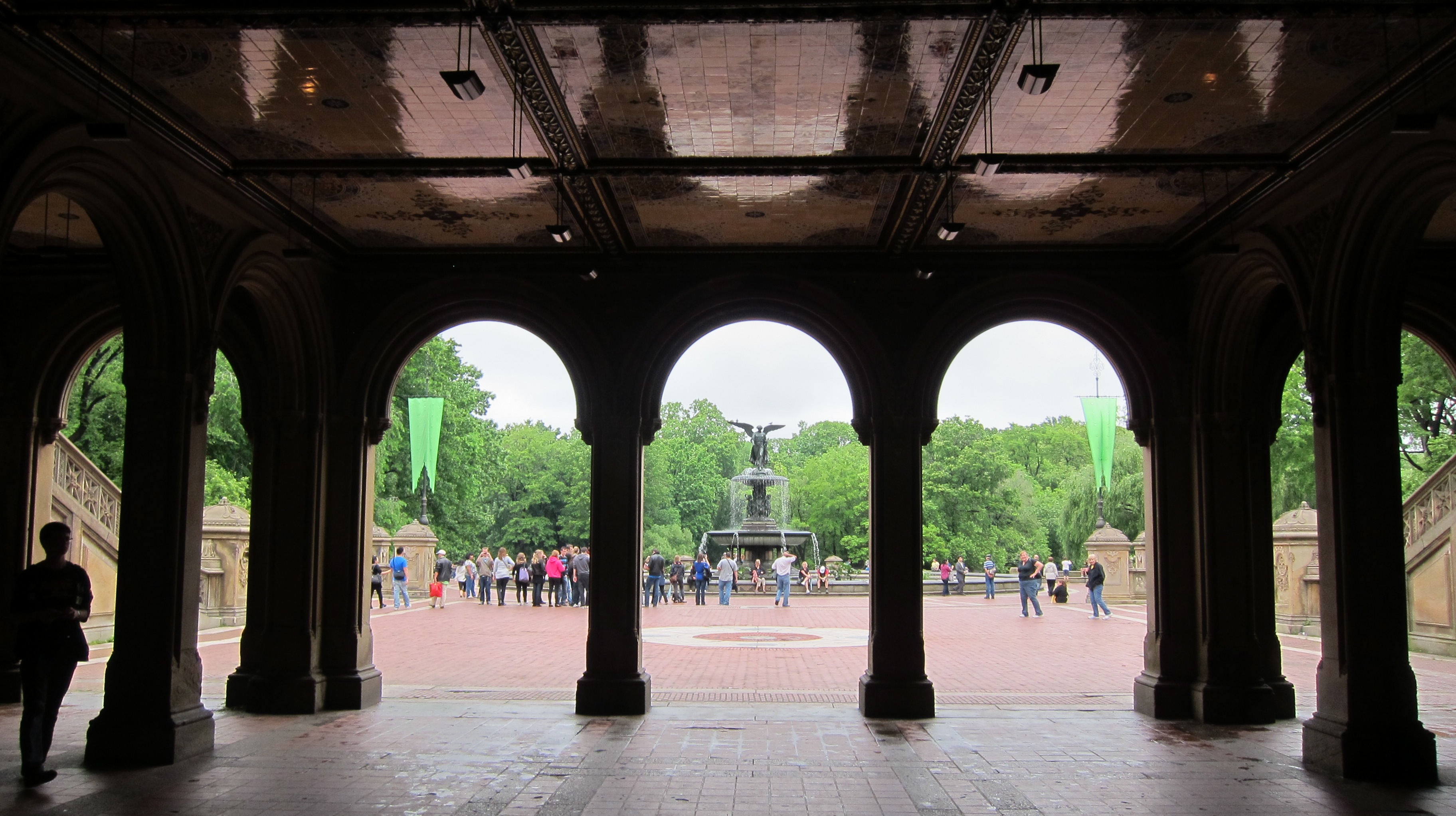 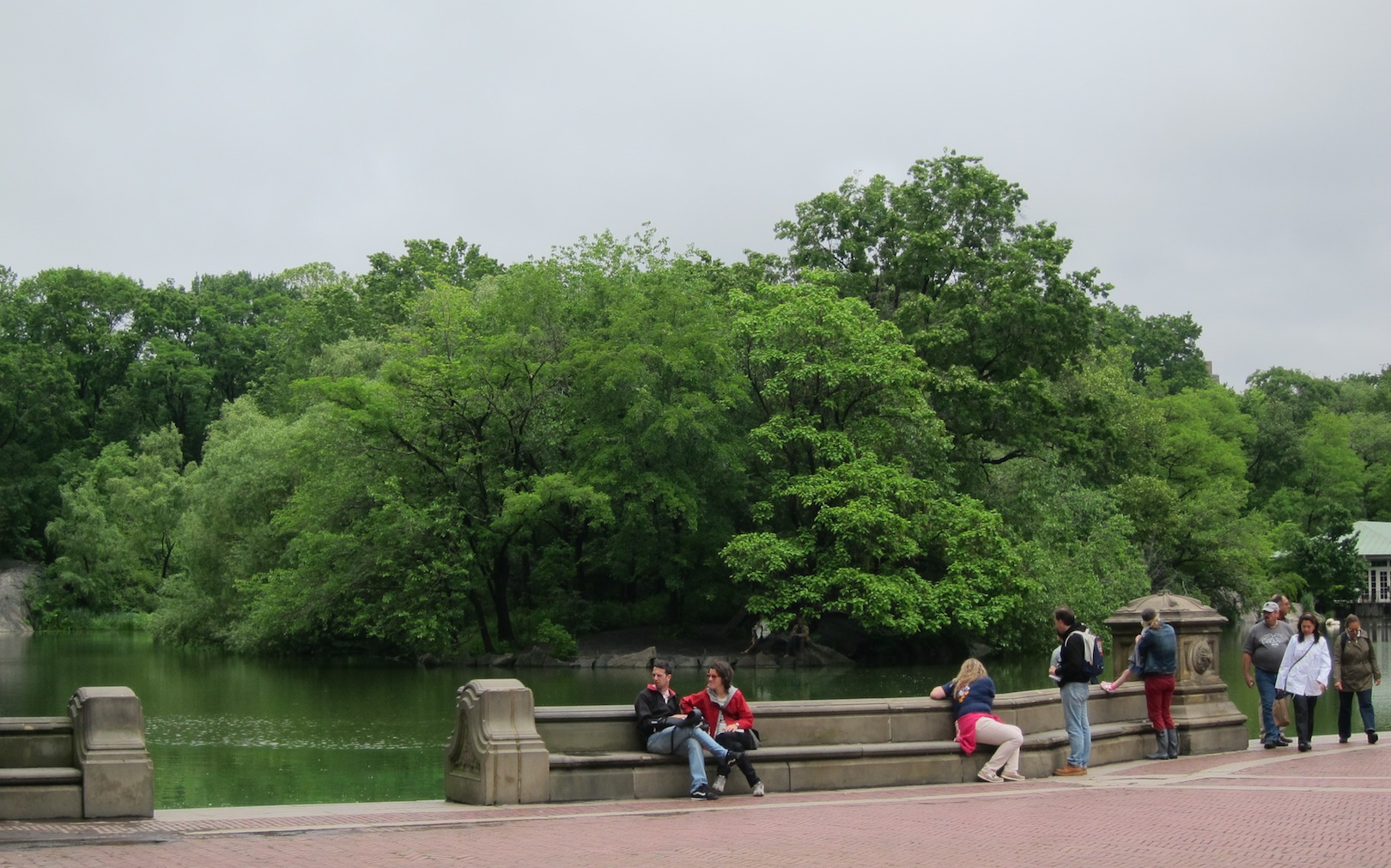 View from Bethesda Terrace across the Lake to the Point and the Ramble. Image courtesy The Cultural Landscape Foundation.

However, the obstruction is also habitat for various birds and animals. This sets up what I call the nature-culture divide - landscape architects, horticulturists and arborists will tell you that thinning the tree canopy is beneficial and, in this case, would also restore historically significant and character defining qualities of Olmsted and Vaux's plan. But, nature lovers and bird watchers will raise concerns about habitat loss. 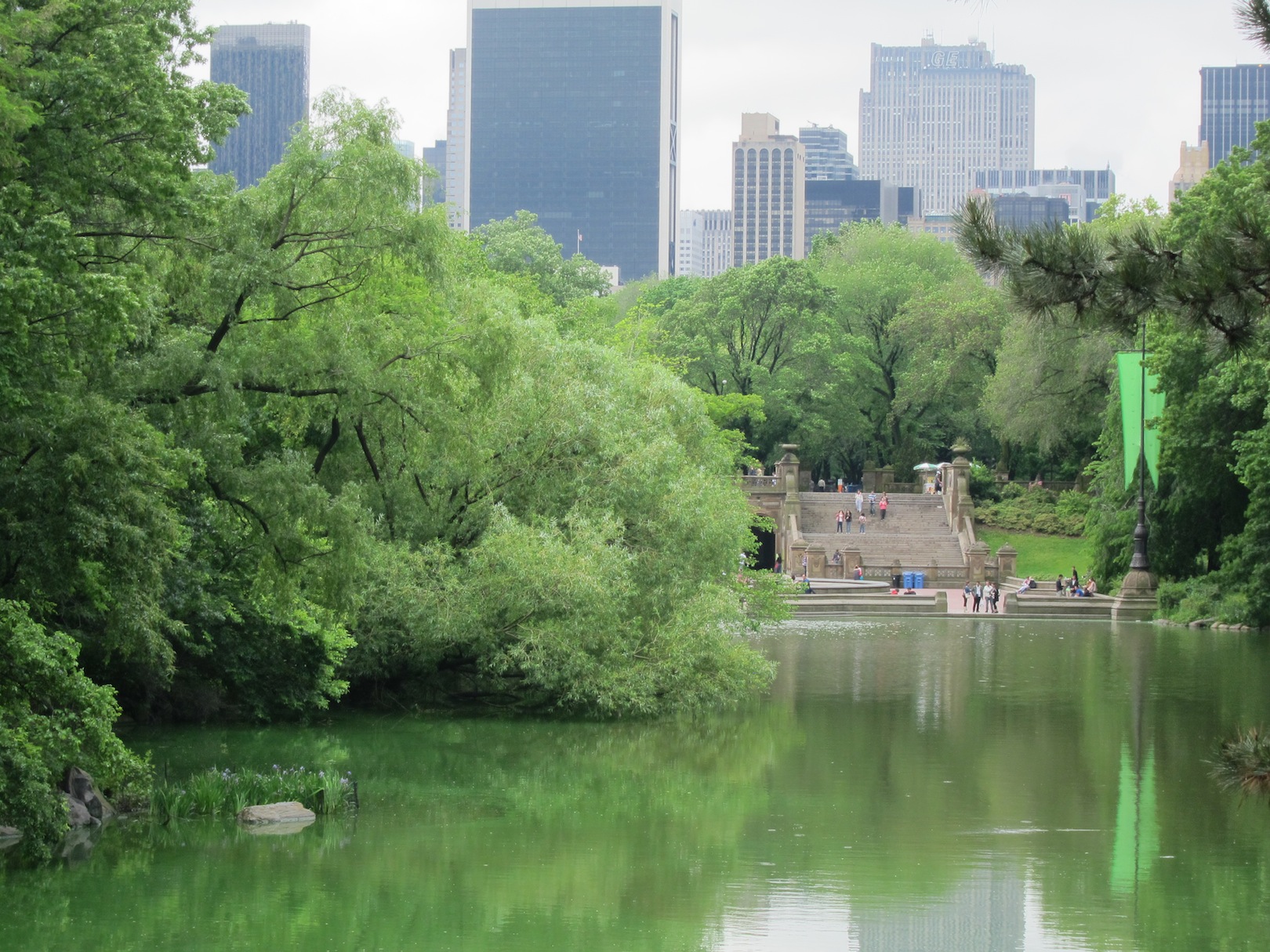 The challenge of navigating that divide falls to the Central Park Conservancy (CPC), a public private partnership, which for more than 30 years has handled the 843-acre Park's day-to-day management - here's the shortlist:

Conservancy crews care for 250 acres of lawns, 24,000 trees, 150 acres of lakes and streams and 130 acres of woodlands; install hundreds of thousands of plantings annually, including bulbs, shrubs, flowers and trees; maintain 9,000 benches, 26 ballfields and 21 playgrounds; conserve 55 sculptures and monuments, as well as 36 bridges; remove graffiti within 24 hours; and collect over 5 million pounds of trash a year. 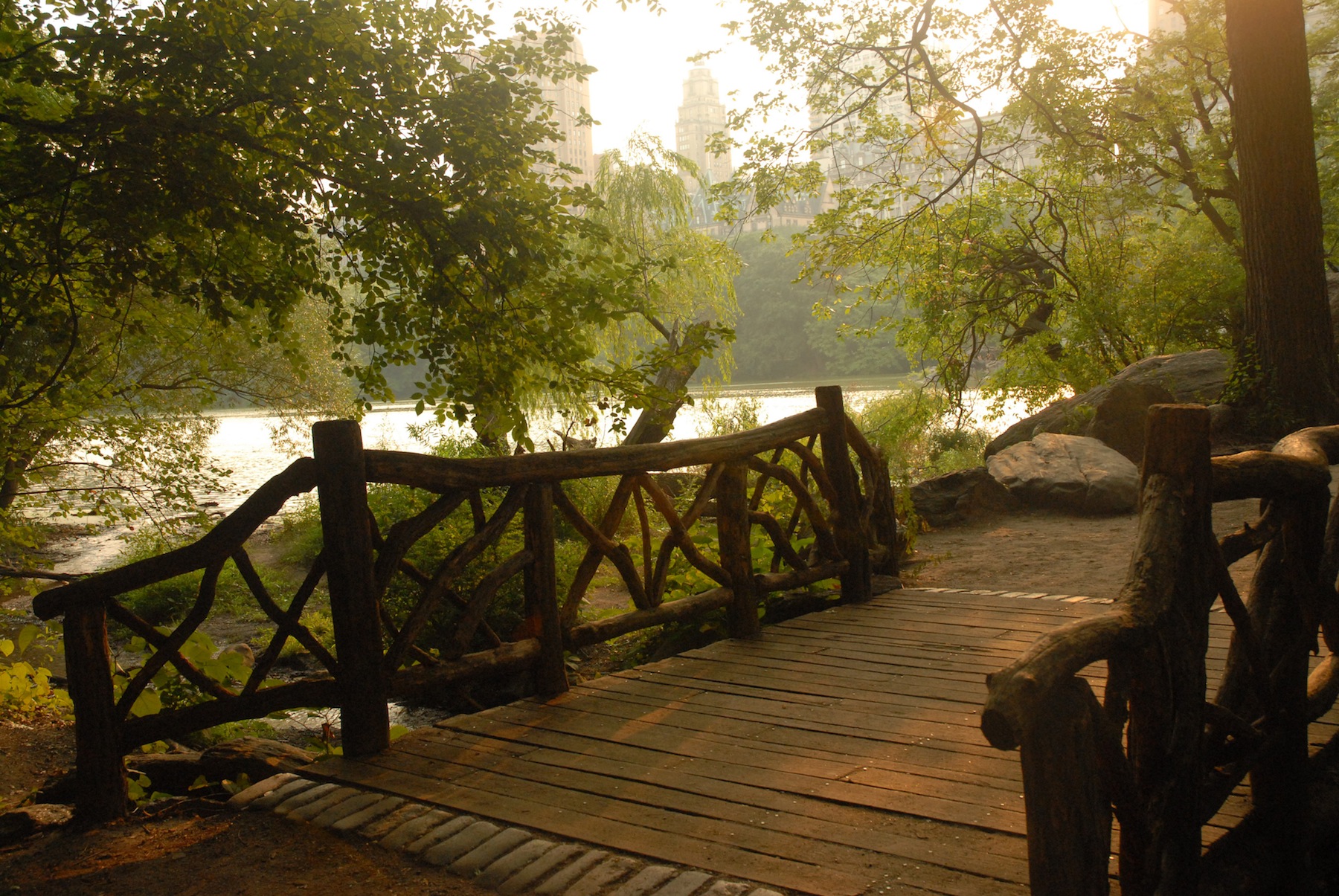 The Park's designers complemented the rugged character of wooded landscapes they created with rustic structures and features, such as this footbridge (recreated in 2010 by Conservancy craftspeople). Image courtesy the Central Park Conservancy.

And, if that's note enough, they're also responsible for raising 85% of its nearly $46 million annual operating budget! That's a massive amount to shoulder.

I recently toured the woodlands with Chris Nolan, CPC's Vice President for Planning, Design & Construction, who provided a sobering assessment of the situation they're addressing. 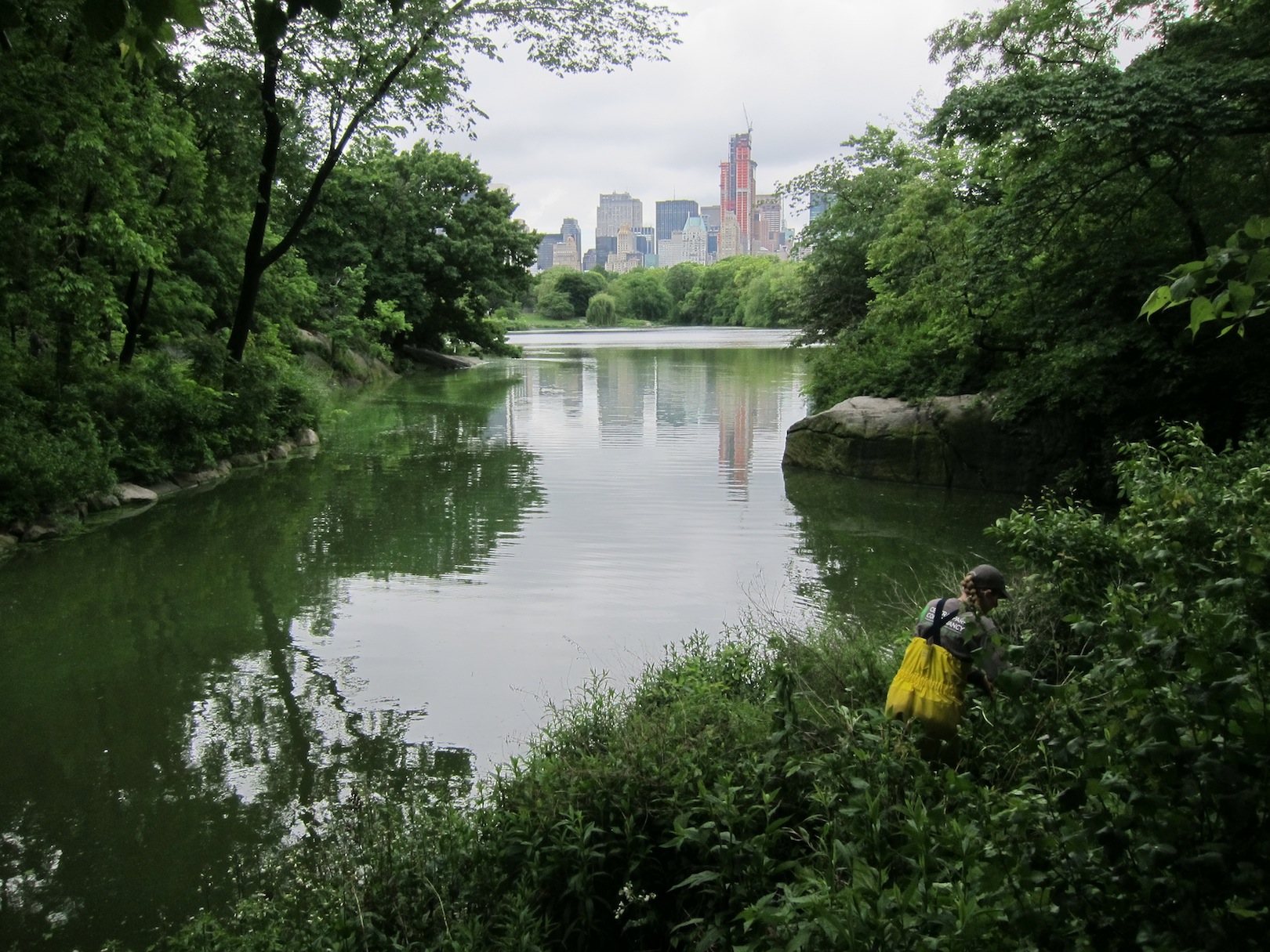 He said, "For most of the 20th century, the woodlands suffered from management neglect resulting in erosion, sedimentation and deterioration of paths, infrastructure and rustic features. In the self-perpetuating cycle, the decline of the landscape contributed to misuse, which further exacerbated the physical deterioration."

To get a sense of what can be accomplished, look at the New York Botanical Garden's (NYBG) Thain Family Forest, a 50-acre section of forest that, according to Todd Forrest, NYBG's Vice President for Horticulture and Living Collections, "has been preserved by generations of stewards, celebrated by painters and poets, and scrutinized by botanists and ecologists for over a century. It has served as the Garden's living laboratory, outdoor classroom, and sanctuary from urban encroachments since 1895." 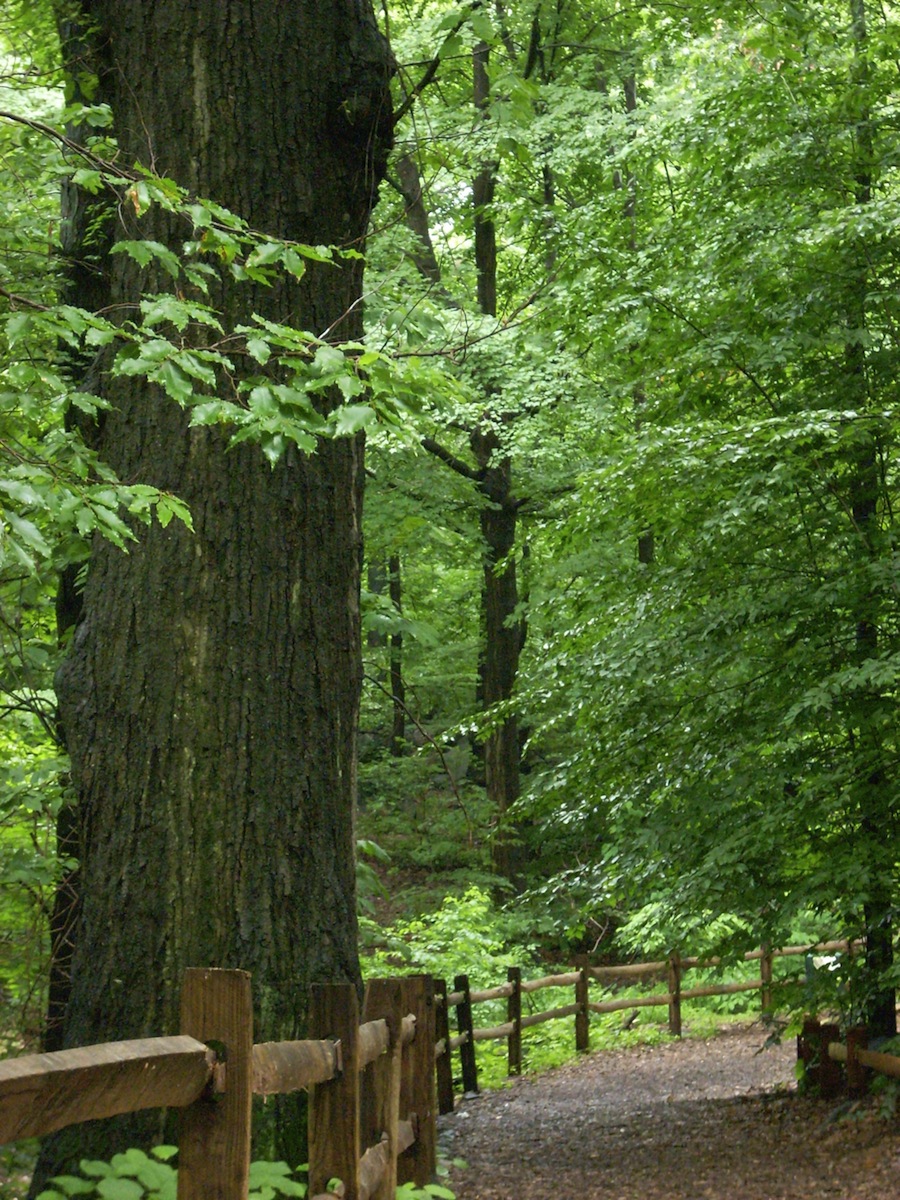 The newly restored "old growth" forest like Central Park's woodlands, has been the subject of decades of research and analysis. There are some differences - NYBG's forest is historic forest land, while Central Park's woodlands are a designed landscape - but there are also important commonalities. As the New York Times critic Edward Rothstein's detailed and insightful review noted, the Thain Family Forest is a "managed" forest - same as the woodlands.

The woodlands, and Central Park, are also beloved, but even that love has to be managed or as Prospect Park's Vice President of Design and Construction Christian Zimmerman who says we run the risk of our public parks being "loved to death." Therefore, park stewards and park constituencies need to communicate and cooperate to promote holistic and sustainable management practices.

So, what's the role of education and strategic communications in the public process and the political arena? CPC has been meeting with an advisory group of birding enthusiasts and representatives of the Audubon Society and other naturalist organizations for more than two decades, consulting with them through the 1990s and into the 2000s on management and incremental restoration work throughout the woodlands. 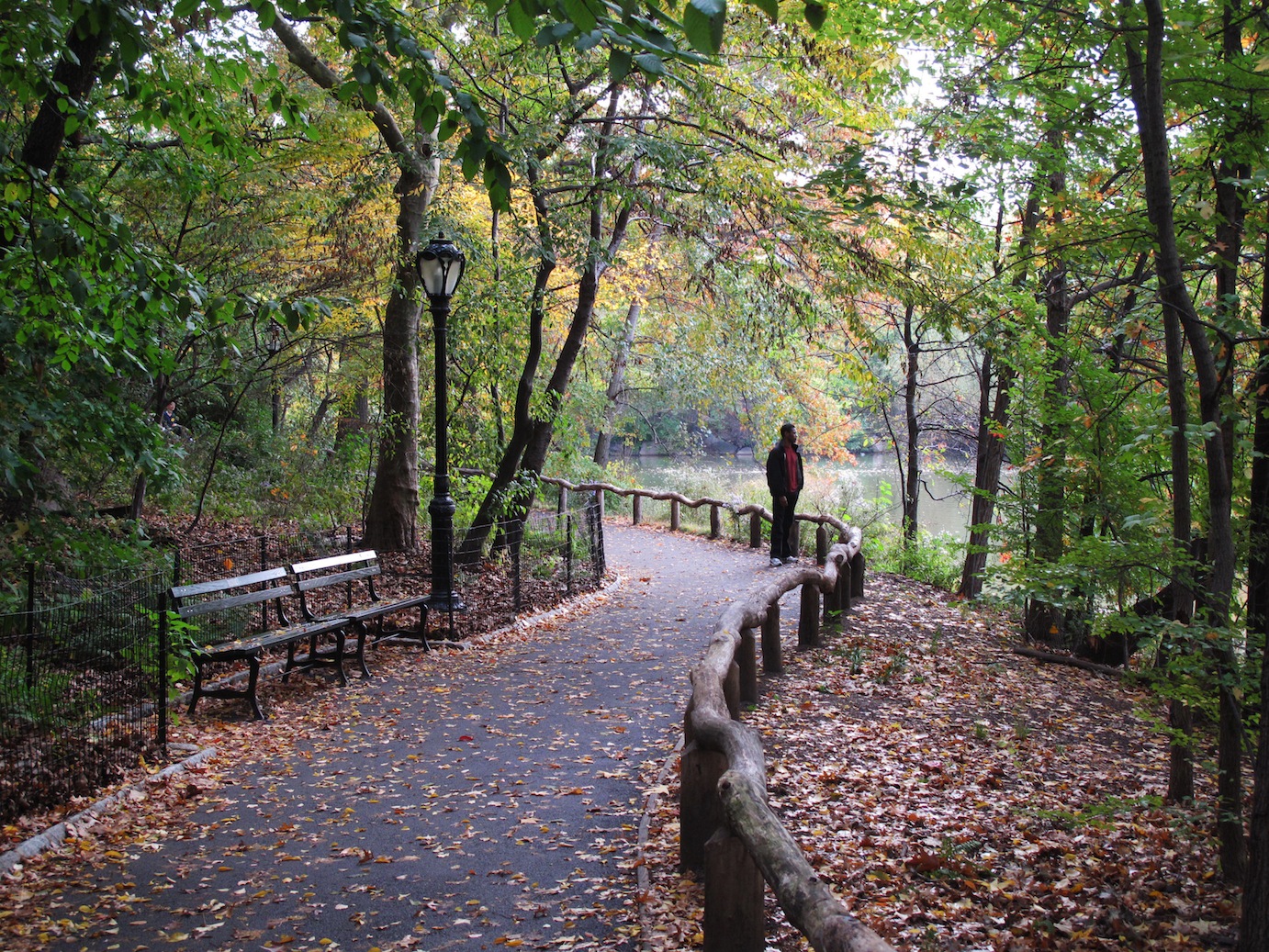 The shoreline of the Ramble was rebuilt by the Conservancy from 2008-2010. Image courtesy the Central Park Conservancy.

To advance this discussion further, my organization has teamed up with CPC to help in that process. We're holding a daylong conference in New York on October 5, 2012, titled Bridging the Nature/Culture Divide II - Stewardship of Central Park's Woodlands, that features stewards of some of the nation's leading urban forests including Michael Boland of the Presidio in San Francisco, Central Park's Chris Nolan, Prospect Park's Christian Zimmerman, NYBG's Todd Forrest, along with the Wildlife Conservation Society's Eric Sanderson, author of Mannahatta, and others.

The timing is critical - Central Park faces unprecedented use, along with changing climatic conditions and an onslaught of severe weather events. Additionally, increasing knowledge and proven notions about ecological restoration have added a new dimension to this century-and-a-half long conversation about how we interact with our environment and manage our idealized version of nature. 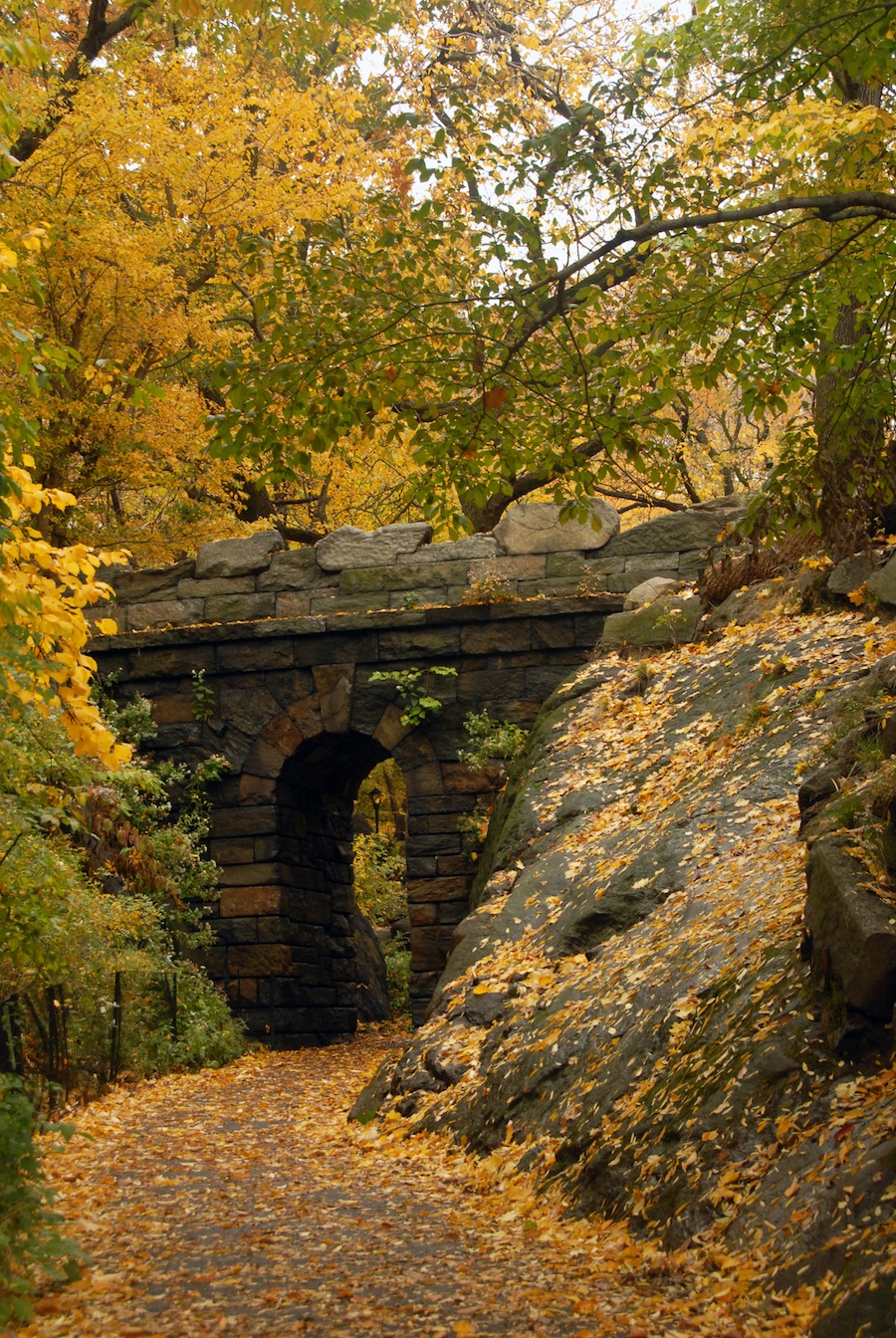 The goal is to bring together individuals with a range of relevant experience to share insights and ideas and contribute to an engaging and timely discussion about Central Park's woodlands as its stewards plan for their future.

The conference will be preceded on Thursday, October 4 by a reception at El Museo del Barrio honoring the Central Park Conservancy Trustee Judith Carson and featuring the unveiling of 2012 Landslide: Landscape and Patronage. The conference will be followed by What's Out There Weekend NYC, Saturday and Sunday October 6-7, featuring free, expert-led tours of more than two dozen publicly accessible parks and open spaces throughout New York City.