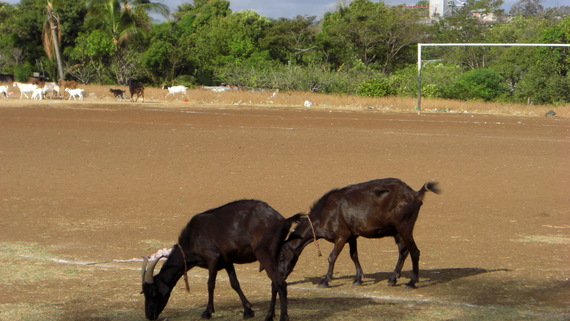 In February 2008, we held our first practice on a dirt field next to the chicken factory in Granada, Nicaragua. A herd of goats lazily wandered through, and the fact that the town's water had gone out coupled with the blazing heat made us wonder who would come. Cora would be one of them.

Cora lived just on the other side of the field in a house with 13 other people. Raised by her extended family after her mother passed away, Cora spent her days as one of many mouths to feed; soccer with the neighborhood boys was her outlet, the nearby field her escape. That day, she wandered across the glass-covered dirt field in her flip-flops, kicking them off immediately to juggle with us. I passed her a pair of sneakers, more for my own peace of mind than hers.

From that very first practice, it became clear that Cora's talent at the age of 15 far exceeded this backyard dirt field. Under the banner of a young Soccer Without Borders, we were not there to identify and develop talent. We were there to work with community leaders to build a safe space for all girls to learn and grow, on the field and off. While discovering Granada's first superstar was not on our agenda, here she was. And so our relationship with Cora began.

In the coming months, we created the city's first girls-specific after-school program. The program grew quickly to meet the need and demand, adding off-field educational activities and an earned equipment system. Cora potential was top of mind with every decision.

A year later, our hopes for Cora were realized: she was selected for the U-20 Nicaraguan Women's National team. Equipment support and a handful of coaching hours were no longer enough. She needed bus fare to and from the capital daily, and a hearty lunch before practice. She needed soap and detergent to accommodate the extra dirty clothes, and a tutor to help her balance her studies with the additional demands on her time. Most importantly, she needed someone to convince her family that this was a worthy use of her time, knowing that her absence at home meant that everyone else would carry a larger burden.

Nevertheless, we pressed on, devoting at times more than a third of our limited human and financial resources to Cora. A volunteer rode the bus with her to Managua most days. Another met weekly with her school director. We were all on call for her family, who began to steal Cora's bus fare on days she was scheduled to travel solo. In the face of such need, using the money for sports was viewed as selfish; it had to be shared like everything else.

There were good days and bad days. One evening, Cora fainted. We scooped her up and taxied to the free hospital. She wandered out an hour later with a torn scrap of paper in her hand with a single number on it. "This is my sugar level," she explained.

That day began a series of futile doctor's visits and more scraps of paper, eventually leading to the worry that she shouldn't be playing soccer. But Cora was slated to travel with the national team for the first time, her first international travel. Her appearance for her country sent a ripple of pride through the program, and renewed our sense of purpose and commitment to helping Cora reach her potential. She returned home from the trip confident and proud, but also distant. She had changed.

Cora began skipping school and practice, mysteriously disappearing for days at a time. We met with the school counselor weekly, and walked her to school in the morning. It wasn't enough. The level of psychological and emotional support she needed was beyond our capacity.

I knew that there would be tough decisions on how to allocate limited resources in human service work. What I didn't expect was how emotional that decision could become as you weigh the needs of the real people behind it, and grapple with your ability to meet those needs. How do you choose one over another? How do you know when to let go? No matter what we tried, we couldn't bring Cora back into the fold.

I visit Cora, and now her son, every time I am in Granada. We reminisce about her trip to El Salvador and the first day we met at that dirt field. She encourages all of the young girls in her neighborhood to join the program. She never asks for a thing, though I know she misses having a pair of cleats to call her own. I think about the program as it is today: year-round, safe and private facilities, a school uniform and scholarship program, a trained psychologist director, full-time coaches, close-knit teams, and family engagement. I wonder if now it would be enough.

I could not be prouder of the girls in our program today, and the coaches who support them. These girls and coaches are truly "rompiendo fronteras"- breaking boundaries -- every day. They overcome obstacles so great that worrying about a bare foot on a glass-covered field seems silly. Yet while success keeps us pressing forward, it's failure, the girls we couldn't reach, the girls we couldn't keep, the Cora's, who inspire us to dig deeper, reflect harder, and never aim for anything less than our full potential.