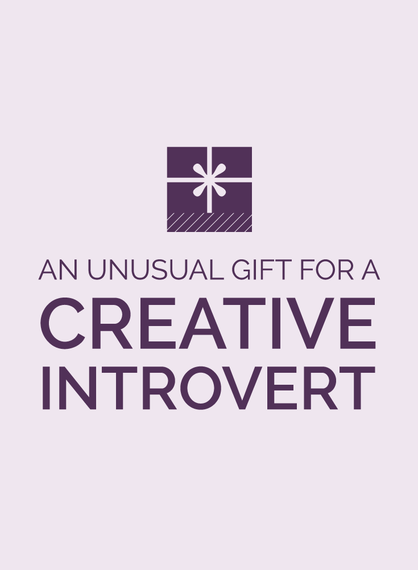 I'm an introvert, often mistaken for an extrovert.

I can talk a lot, I'm not afraid of large parties, I have zero problems being the centre of attention and new places or experiences make me really happy.

But I also need to tap out if I've been in other people's company for anything more than a few hours, I stop talking, don't want to go anywhere and I crave a retreat to my bed, sofa or desk.

I also have an almost two year old son.

Which makes the aforementioned retreat close to impossible. Luckily, my fragile energy refuelling system has adapted pretty well to parenthood and I can get the recharge I need during my boy's nap times (when I typically work on my logo design business) or when my husband takes his turn getting up at 5am on a Saturday. Usually, I'll read or make something rather than waste those extra few hours in bed sleeping.

As for my husband, he works incredibly long days at his day job as a truck driver and in his 'spare' time, is writing his first novel. For him, this means stealing time wherever he can, he'll often be up at 5am, even if our son isn't.

So when sitting one night, discussing the impending Holidays, the well versed question came up...

"Is there anything in particular you'd like for Christmas?"

My mind filtered through the usual stocking fillers, Pinterest obsessions, perfumes, clothes, gadgetry, but fell short of any real wanting or perceived satisfaction. My husband felt the same. We left the question unanswered. Fatigued already by the unending decision making involved at this time of year.

The next day, we spoke about how slow the progress on his book had been and about my craving to return to painting and creative pursuits for pleasure rather than income. He left for work with a sigh and a "One day we'll have more time."

He was gone for about 30 minutes when I sent the following text:

"Love, I know you're struggling with this book, so how about for Christmas I book you away for a weekend on your own? You pick the place. An artists' retreat."

To which he replied:

After receiving his elated reply, I immediately felt jealous of my own idea and proclaimed that I knew exactly what I wanted for Christmas too.

That evening we sat like a couple of excited school kids and scrolled through search engines looking for our respective retreats. I found a quaint cottage in the woods and started fantasising about the purely indulgent food and necessary art supplies I would bring. And my man found a beachside cabin so he could go for a morning swim (we live in Australia, so that's not as horrific as it sounds this time of year) before spending an uninterrupted couple of days on his book.

We agreed to pick seperate weekends in January, so one could hold down the fort and solo parent while the other was off galivanting with creativity.

We've had mixed reactions from friends, one saying "You guys are so weird, I'd rather go away together with my husband." Another saying "That's genius, I would love a weekend of free time alone".

While the idea of a weekend away together to pursue our creative endeavors does sound romantic, I know that in practice we would spend more time relaxing with each other than on our projects. My husband is the biggest distraction to my creative work. It also means extra planning, babysitters and really defeats the whole purpose of creative alone time.

I'm already fantasising about what my solo weekend will have in store. A wander around the local village, painting, writing, crafting, sleeping, eating, reading and generally enjoying the routine and responsibility free head space. There is a chance I'll get bored or lonely. But I really don't think that will happen.

All I know is that since deciding on our gifts for each other, I've entered the busy holiday season with a spring in my step. Knowing that on the other side of it, lies some serious creative down time. A chance to eat, be, relax and make. And a chance to return fully refreshed and recharged to my beautiful little family.

Is this something you would consider gifting?
Or even asking for yourself?