Monday, October 13, 2014 marked a major shift in U.S. and Washington history. Joining forces with a number of cities around the country removing the celebration of Columbus Day, Seattle officially adopted the second Monday in October as, Indigenous Peoples' Day.

Seattle City Hall was bustling as people counted down the hours to the official signing of the resolution from the mayor. The morning began with a prayer and blessing by Glen Pinkham, a Yakama Tribal Elder followed by a special presentation from Red Eagle Soaring Native Youth Theater.

"Where are your moccasins?"

"Do you talk Indian?"

Those are just some of the myriad of questions Native people are asked on any given day, it was also the opening of the latest production from Red Eagle Soaring.

Red Eagle Soaring is a Seattle-based Native youth theater founded by Martha Brice (adopted Tlingit) back in the 1990s. Under the direction of Fern Renville (Sisseton Wahpeton Oyate), Red Eagle Soaring offers free programming for youth, ages 10-19, and uses contemporary theatre and traditional Native performing arts to create constructive dialogue on issues affecting their lives and strives to break down ideas that fuel stereotypes. Several of these youngsters represent different tribes from across the nation and for many, leaving the reservation and moving to the city presents a whole new set of challenges. Red Eagle Soaring provides opportunities for youth to connect with a community of like-minded individuals who honor, respect, and carry on the traditions and language of their ancestors while cultivating the leaders of tomorrow.

For this historic event Red Eagle Soaring presented, We Are, a series of skits telling the stories of discrimination and assumptions, as well as stories of hopes, dreams and seasons of change. Among the audience were human-rights activists, council members, clergies and educators -- all united in solidarity and listening ever so carefully to the words from the youth.

We tell the stories. We define who we are. We are urban Indian youth.

After the presentation, there was a youth panel discussion with special guests from the Tlingit Haida Chapter of Washington, Urban Native Education Alliance (UNEA) , Huchoosedah, and Native Youth Leadership Academy.

The two questions presented to the youth were:

Some of the youth answers:

These hopes and dreams are not different from anyone else's. These kids want equal treatment with respect to opportunities for education, health care, work, and other basic needs that many of us take for granted. Throughout the course of history we have seen advancements in technology, travel, medicine, mobile communication and more. Yet, only until now has the Native community (victims of discrimination, ridicule, ongoing marginalization and poverty) been given the proper and long-awaited acknowledgement.

The day ended with Mayor Ed Murray signing the official resolution honoring indigenous peoples. There couldn't have been a more silent place on earth -- a sacred moment of healing permeated throughout the room at City Hall. 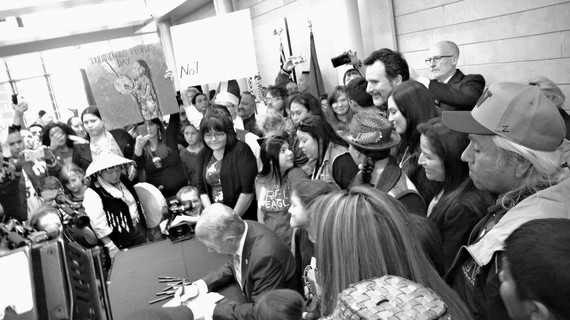 It was a fine day indeed, filled with much joy and celebration. As I made my way home, I pondered on the deeper meaning of Indigenous Peoples' Day. No matter the ethnic background, we're all Indigenous to somewhere, someone, and somehow. If we step away from the anger, resentment, bias, and prejudices, we all have something to celebrate. I smile when I think about the youth of Red Eagle Soaring who will one day, as elders, tell the story of one of the finest days in Seattle and U.S. history and they'll get to say, "I was there."

** note:
Sadly, just days after this historic event, the Native community suffered the tragic loss of Native American actress, Misty Upham. Missing for over a week, her body was found in a wooded area in Auburn, WA.

Misty was born in Kallispell, Montana and was a member of the Blackfeet Nation. An alumna of Red Eagle Soaring, Misty had several acting credits and was best for known for her role in the 2008 film Frozen River. She was 32.