The star clouds that form the Milky Way were seen as the tree of life where all life came from... Every winter solstice when the earth made its way around the sun it appeared to move against the background stars... the sun conjoined the crossing point of Milky Way where the dark rift was and ecliptic in Sagittarius. The sun "coming out " from the dark rift appeared to be birthed by Milky Way. During this time the Cosmic Mother gives birth to Huitzilopochtli, the sun god. Guadalupe's painted image shows the sash that indicates she is pregnant and on the sash is the flower symbolic of Huitzilopochtli. She is going to give birth to the sun god. -- Ana Castillo 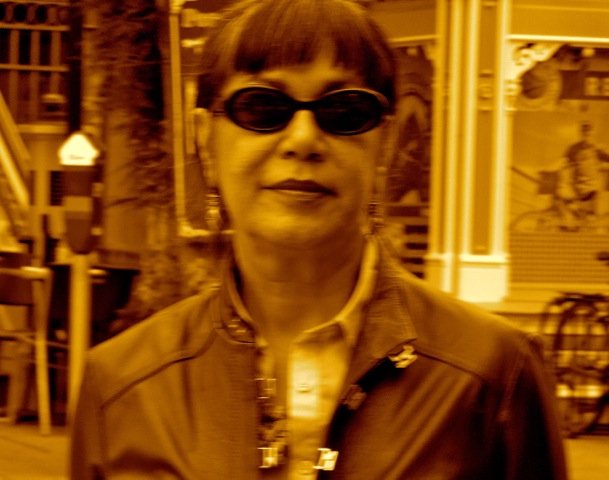 "Last summer when I was doing research for a novel (The Last Goddess Standing) late into the night, working beneath the New Mexico desert stars, was when I came upon this information," said Ana Castillo in San Francisco to deliver a keynote. "I began to connect the dots one by one."

On the heels of a Tucson controversy that hit the national media, Castillo chose the Association for the Study of Women and Mythology (ASWM) national conference to unveil the personal mythology surrounding her elevated stature as acclaimed cross-disciplinary writer of female spirituality connected to her Chicana roots.

In doing so, she seized the reigns of the female spirituality movement during her keynote address illuminating the conference theme, "Creating the Chalice: Imagination and Integrity in Goddess Studies." ASWM was created by Sid Reger from the East Coast and Patricia Monaghan from the Midwest, with the 2012 San Francisco conference co-chaired by Reger and priestess/author/publisher Anne Key serving as both a national reunion and commemoration of the spiritual foremothers of the Bay area.

"There have been lots of scholars and artists around the country, working on topic of goddess scholarship, since the mid-'70s," said Reger. "In the Midwest, all of us were working in isolation. But that curse was also our blessing; we recognize the need to create an organization to bring everybody together to strengthen our work. That's why we created ASWM." 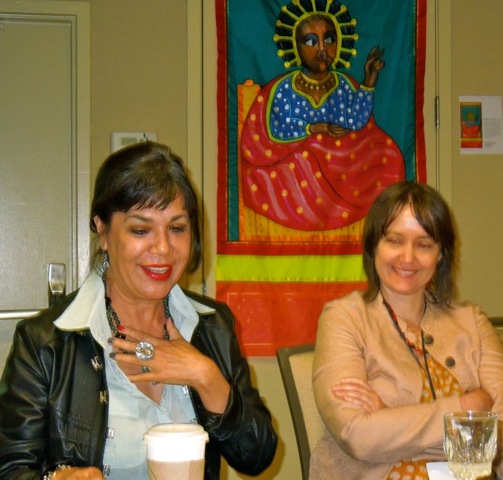 After her keynote, Castillo shared her personal journey with a reading from "My Daughter, My Son, the Eagle, the Dove" on a panel with Kathleen Sweeney, author of Maiden USA.

She was in Tucson to heal, the reports said.

What was this lauded boundary-smashing Chicana writer healing?

The truth was revealed in San Francisco last weekend. The truth of why her books are so potent to be banned. The truth that only the esteemed author of Goddess of the Americas and the banned title So Far From God could spearhead a much broader mission for unity than the troubled Tucson school district.

"First her books get banned in Tucson, now she's made a breakthrough in feminine spirituality. This is a dangerous woman!" declared Castillo at the start of her keynote address to a gathering of pioneering figures of the feminist spirituality movement such as Z Budepest, Cristina Biaggi and Charlene Spretnak, who received the Demeter Award for Leadership in Women's Spirituality.

In a remarkable weaving of art and science into the 2012 mythology, Castillo was the quantum wave crashing at a conference dedicated to healing the rift between academic disciplines. It was clear to many in the room that she was providing the missing feminine voice capable of renewing the Goddess Movement on a global level after it disappeared underground following the backlash of its New Age commercialization in the '80s. 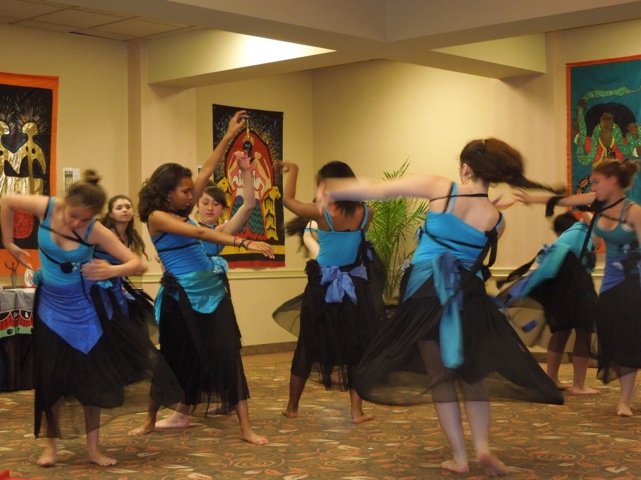 The ASWM conference was both a reunion of movement foremothers and participatory passing of the torch to a new generation through the lively presentation of the Dance Mission Theater GRRRL Brigade, an empowering artistic development initiative for San Francisco girls.

"Creating the Chalice" revisited the huge initial strides of incorporating Goddess studies into archeology by pioneer Marija Gimbutas who coined the term archaeomythology to incorporate a cross-disciplinary holistic approach to digging through ancient ruins. 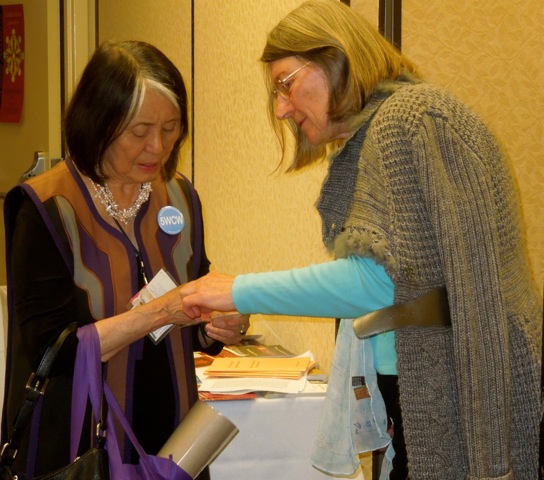 Jean Shinoda Bolen (left), who is pioneering a movement for a UN Sponsored 5th Global Conference on Women, conferring at the conference with Dr. Heide Goettner-Abendroth

Yet, the conference also revealed the backlash from the patriarchal entrenchment in academia, with numerous stories of male faculty squashing the multi-disciplinary approach.

"Despite the warnings to restore balance and harmony, it is still very patriarchal, very masculine," Castillo said of the shamans and curanderos in her own Mexican Indian culture, a parallel to the masculine domination of archeology in the academy which continues to repress any connection between the archeological findings and spirituality of the ancient people, such as the Mayans, who were attuned to the cosmic cycles.

Solidifying her role as trailblazer, Castillo introduced astrology into the cross-disciplinary ASWM by filling in the gap left by 2012: The Return of Quetzalcoatl author Daniel Pinchbeck and the psychedelic counterculture, slow to acknowledge the astrology and Goddess mythology at the very source of the Mayan calendar end date.

Yet, Castillo drew the connection between heaven & earth, past & present, in her keynote address:

The Venus Transits (1518 and 1526) coincided with the arrival of the Spanish. The Aztecs knew Venus in the sky -- the Morning Star and its opposite the Evening Star, glowing brightly each. Cortés, a man on two feet, once he dismounted his frightening and powerful beast, wore a shiny metal armor. The people we call the Aztecs had gold and silver but did not know steel. Beyond the light skin and those with blond hair and beards, the Conquistador and his men in armor glimmered in the sun, like shining fallen stars in armor made of the shiny hard material. And above all, Quetzalcóatl's return was not an arbitrary date. It was the time of the Venus Transit and Venus had landed on earth.

"A denial of astrology means disembodying the movement," declared the mystic healer Vicki Noble, who recalled the struggles of attempting to publish under a general ban of the use of the word Goddess or Kundalini.

In this atmosphere of recollection and dialogue about a forward momentum, Castillo seized the torch to illuminate a Kundalini fueled feminist renewal. By arising from the foundation of a new approach to matriarchal studies presented by the German scholar Heide Göttner-Abendroth's "Way into Egalitarian Society" published by the International Academy HAGIA, Castillo's mythology prepared the ground for an Aquarian ideal of gender equality.

The World Tree is also a symbol of the Yod that will be formed in the sky during the 2012 Winter Solstice. This alchemical configuration, which astrologers refer to as the Finger of God, points to the arise of authentic feminine voices from underground.

As evidence, there are exhibitions on Quetzalcoatl at the Los Angeles County Museum of Art and Penn Museum. Yet, no institution has yet seized the moment to draw a parallel between the Venus cycle, the conquest of Mexico and the precession of the Equinoxes.

This task was left to Castillo, who presented, for the first time in public, her Eureka moment: connecting the Virgin Guadalupe to the Great Mother at the center of the Milky Way giving birth to the divine child of a new cosmological age determined by the precession of the equinoxes.

"Creating the Chalice: Imagination and Integrity in Goddess Studies" was a vessel for crossover breakthroughs such as lauded poet/literary scholar Annie Finch whose new book Among the Goddesses pioneers a new cross disciplinary literary form and pioneering video maker Kathleen Sweeney, whose multimedia Maiden USA, tracks today's onscreen female warriors to the classical goddess of the hunt.

All photos by Lisa Paul Streitfeld