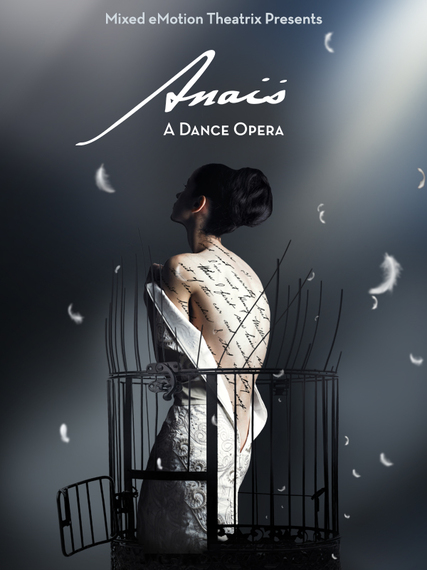 Many of us grew up reading Anais Nin's diaries which famously document the inner experience of a free openly sexual woman. Living in Paris in the 1930's, Nin shunned conventions, demanding to be allowed to live an uninhibited life like any man of her time. For many, Nin remains the ultimate feminist icon.

Anais, A Dance Opera premieres this week in Los Angeles, using music, dance, theater and projections to evoke the life of Nin and celebrate a woman who continues to influence the world today. Sensuous, compelling and thought provoking, the production brings to life Nin's story - from her emergence as an important literary figure in 1930's Paris to her death in Los Angeles in the 1977.

Two Nins are featured in the production. Vocalist Marisa Matthews plays Eternal Anais who is onstage for virtually the entire 90 minute production and provides commentary as her life plays out onstage. Matthews roams through the scenes using a handheld mic, "creating an effect that is part rock show, part theater experience", says Shapiro. Dancer Micaela DePauli plays Anais Nin at various ages in the unfolding story. Like Matthews, DePauli is onstage for almost the entire show and delivers an impressive sensuous and athletic performance. Nin's famous lover, writer Henry Miller, her husband Hugh Guiler and other key figures in Nin's life are evoked by an ensemble of dancers.

The production has the full support of the Anais Nin Trust as well as Nin's publisher Paul Herron. The writers also had access to Nin's diaries and papers which are archived at UCLA. Nin's own words are projected onto a screen throughout the performance, along with lyrics from the songs. In one scene, a recording of the real-life Nin reading from her diary is heard as dancers interpret her words.

The dancers and vocalist unveil the author's journey of self-discovery which took her from a naïve young housewife into the café society of Paris where she emerged as an important literary figure during the 1930's, through her life in the United States during and after World War II, to her death and its aftermath in the 1970's. Nin's adventures of self-exploration led the author through numerous simultaneous relationships, anonymous and random sexual encounters (at times dressed as a man), bigamy, and other grand deceptions which she kept track of using what she called her "Lie Box," ultimately to be revered as a multifaceted, multidimensional woman.

Addressing the author's complex relationships with her father, her husbands, and her lovers, including her most famous partner, Henry Miller, Anais, A Dance Opera reveals that Nin's deepest and most passionate relationship was with herself, her self-examination through writing being more intimate than any sex act.

"I feel like her story about the empowerment of women still resonates today," says Roston. "It has a big appeal for a wide age group." "Nin was the original blogger, Roston adds. "She would have felt right at home on Twitter."

Anais, A Dance Opera plays through September 18 at the Greenway Court Theatre in Los Angeles.
For tickets and more information, visit www.greenwaycourttheatre.org/anais

This blogger has a psychotherapy practice in Los Angeles. To make an appointment with Christine, contact chris@talktherapynow.com