Former President George W. Bush has only recently broken his silence on the death of Osama bin Laden, the world's most wanted criminal that the Bush administration was unable to catch during his eight years in office. Although President Bush was neutral and measured in his response, many in the Bush camp have tried to reserve some credit for themselves in apprehending bin Laden. Bush's former chief of staff Andrew Card claimed that President Obama "pounded his chest a little too much" after the killing, and most Republicans were sure to give enormous credit to Bush-era policies that resulted in the capture of bin Laden.

Almost immediately, many noted that giving credit to an administration that was unable to complete the task seemed a bit odd. Andrew Cohen wrote that "Former [Bush administration] government lawyer John Yoo taking credit... is like Edward John Smith, the captain of the Titanic, taking credit for the results of the 1998 Academy Awards." Jon Stewart memorably said that the Bush administration is "the Winklevoss twins of killing bin Laden," and Twitter user OTOOLEFAN said, "Crediting George Bush for finding & killing bin Laden is like crediting Pete Best for The Beatles."

We've compiled some other far-fetched instances where credit would be just as deserving as giving Bush credit for killing Osama bin Laden. Vote for your favorite!

13 Analogies For Bush Getting Credit For Bin Laden's Death (PHOTOS) 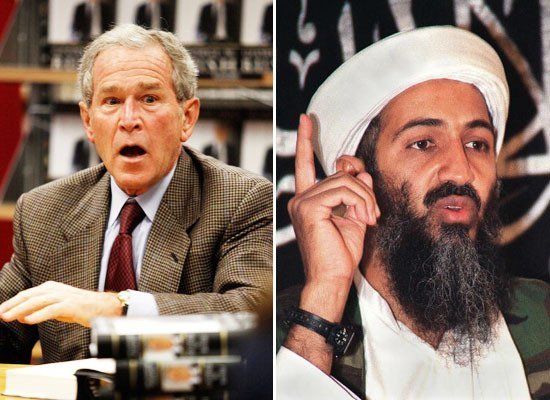