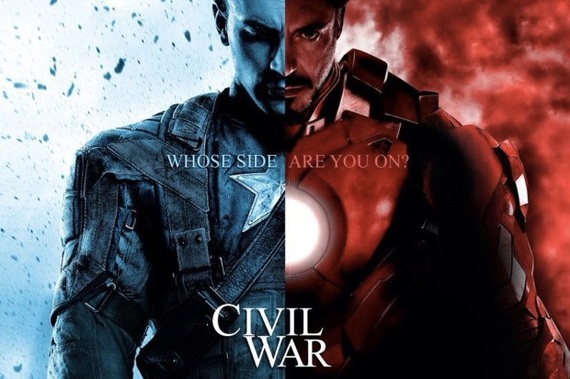 The Captain America trilogy is one of the only few trilogies to flip the genre of each individual film while telling one continuous story. The First Avenger was a war film set in World War II, Winter Solider is a spy thriller, and Civil War is a full-on drama. In 10 years or so, this will be universally recognized as a triumphant, successful feat--in the caliber of T-800 being the hero of Terminator 2, despite being the villain of the original.

Civil War takes place after the events of Captain America: Winter Solider and The Avengers: Age of Ultron and it deals with the fallout of both films and the international oversight the government wants over the Avengers as a result. When Tony Stark sides with the government, a schism is created within the Avengers, which is made even worse when Steve Rogers goes rouge to protect his oldest friend Bucky Barnes when he's attributed to a deadly attack. Action ensues, characters are developed, and story arcs come to an end. Spoiler warning.

What I love about directors Joe and Anthony Russo's approach to action is their ability to keep combat grounded. One of the most striking traits of The Winter Solider as a film is the realistic tone of it, and that tone continues in Civil War. Seeing a number of heroes set in Captain America's territory for the first time with the Russo's direction is a stark contrast to the action seen in Whedon directed Avengers films. The first two Avengers films took action and displayed it as more of a spectacle, a larger than life take that while entertaining, loses some of the realism of what's on screen at the same time. Action in Civil War places personal emotional stakes (akin to lightsaber duels in The Empire Strikes Back) at the forefront. Heroes aren't punching each other for the spectacle of it all, there are emotional stories taking place within the action that has been set up previously, culminating in battle.

Directors Chad Stahelski and David Leitch of the John Wick films also had a hand in directing a lot of the action scenes of the film. I love the Russo's foresight to bring in other talents in order to produce what's best for a movie. Although the exact scenes aren't known at the time of this write-up aside from the brilliant airstrip battle, I feel their presence could be felt most in the staircase scene with Cap and Winter Solider. Choreography was tight and stylized. It looked gritty and had a sense of realism, reminiscent of the staircase scene in Daredevil season 2.

There are so many stories developing, expanding, and closing in Civil War. There are so many moving parts involved in this 2 hour and a half feature, that it would be reasonable to assume the plot would be hard to follow. But it's not. Scenes move so seamlessly and progress so fluidly that A-list characters, whether returning heroes like Falcon or newcomers like Black Panther, get their due diligence without compromising the fact Civil War is a standalone Captain America movie. Unlike most Marvel pictures, Civil War is a very dialogue driven film. The drama displayed in the film is masterful and gives a lot of characters a range of depth, in most cases humanizing them further, showing that these heroes acknowledge the consequences of their actions and have been shaped by them throughout these films.

Robert Downey Jr.'s Tony Stark has had the most character development in the Marvel Cinematic Universe. He's gone from an arrogant, selfish billionaire, playboy philanthropist to a compassionate man who holds himself accountable for everything he's done from weapons manufacturing in Iron Man to unfortunate casualties in his Avengers escapades.

Chris Evans' Steve Rogers has come from being a scrawny young man striving to join the military and stopping the bullies to being beaten down by the events of Winter Solider, changing his outlook on establishment and being feared by the people he's sworn to protect.

Both men's arcs crescendo during this movie. The death of Peggy Carter and the following eulogy by her niece Sharon sets Rogers on a trigectory of being unwavering in what he thinks is right for the remainder of the film. Stark gets a visit from the mother of a casualty in his fight with The Hulk in Age of Ultron. This sets Stark on a path of accountability that contrasts with the morality of Rogers that we've seen time and time again in previous Avengers films. The way Bucky Barnes falls into place with the conflict of Rogers' morality and Stark's guilt is excellent and bookends the inevitable confrontation Rogers and Stark had been building up to since the original Avengers.

Chadwick Boseman IS Black Panther. He's as regal, cunning, and capable as his comic book counterpart. Vengeance seeps from his pores in nearly every scene, and his revenge is set on Winter Solider for the murder of his father. Ryan Coogler, set to direct the Black Panther standalone came to assist screenwriters and the Russo brothers to capture the essence of the character he aims to expand on in his film, a movie that has a lot riding on it in terms of diversity in Marvel and the characters representation as a hero in the black community.

Paul Rudd is a scene stealer and carries every nuance of his character as Ant-Man to Civil War, who provides appropriate humor to otherwise serious material. They also introduce newer aspects of his power to further establish that he can also stand contest with enhanced humans and super suits alike, and it's awesome.

Tom Holland is the greatest Spider-Man we have ever had on the silver screen. He quips, he's appropriately strong, and has great chemistry with whoever he's on screen with. His take on Peter Parker was somewhat reminiscent of Tobey Maguire's meek, goodhearted approach. But with the ability to exchange and match witty, humorous dialogue opposite the likes of Downey.

The only weak links in this film were it's villains Helmut Zemo and Crossbones, with the latter dying in the first fifteen minutes. It's a shame, because most MCU villains are weak links within their prospective films, and most of them die. Reoccurring villains, a real rouge's gallery for these heroes is something I'd love to see. It would allow the villains of these films to move past their rut because with reoccurring villains, you have an established character you're invested in, much like Loki and his reappearances. And with Tom Hiddleston saying Thor: Ragnorok will be his last Marvel film, I felt Crossbones could have been the start to filling that void. Zemo, played by Daniel Bruhl, is a fantastic actor but the part itself is forgettable and honestly unnecessary. I felt as though the conclusion of the film would have been the same with characters reaching their respective resolve and clashing at the end. Zemo was merely used as a plot device to further along the Cap/Iron Man conflict. That being said, Zemo's story was touching and tied together with the overall theme of the film, which is the consequences of actions. But it doesn't hold a candle to all the other excellent storylines being told around it.

Captain America: Civil War is easily in my top 5 MCU films, and I feel that sentiment will be the same with a lot of fans when they see it. It's amazing that the third installment in any trilogy could be the best entry, and yet Civil War just as well may be. I got to ask the Russo Brothers myself how much they enjoyed working with all these new actors and established characters in the MCU when they came to AOL BUILD (around the 26:15 mark), and their answer bodes well for the two-parter Avengers films they're both set to direct, which will continue the storyline established with these characters here in 2017, and '18 respectively.