With seven seconds left in the first half of Sunday's third-round NCAA Tournament game between Louisville and Northern Iowa, Anas Mahmoud entered the court.

He set up a screen for one of his Louisville Cardinals teammates before the clock ran out and the players retreated to their respective locker rooms for halftime. Later, with no more than 90 seconds left in the game, the 7’0”, 200-lb. forward took to the floor, sinking two of his free-throw attempts as his team headed toward a 66-53 victory over the Panthers.

Still just a teenager, the 19-year-old Mahmoud is now forever a part of Cardinals history, as the fourth-seeded team enters a Sweet 16 berth for an unprecedented fourth consecutive season. But unlike his other teammates, the Egyptian has already witnessed a different sort of history: Only a handful of years ago, he was living in his native Cairo, surrounded by violent unrest that even claimed the life of one of his cousins.

The freshman spoke to The Huffington Post about how it felt to play in his first March Madness so soon after he witnessed political turmoil taking over Egypt.

“The violence was everywhere,” Mahmoud said of the tensions in his country before he left in 2013.

“I saw a couple people get shot sometimes,” he recalled. “It was bad.”

Mahmoud said he was not a basketball player at first. His towering height only came later, and he said he first excelled in volleyball and soccer. But he picked up basketball at the age of 12 and fell in love with the sport.

“My dad told me, ‘You’re a much better volleyball player,'" he explained. "I said, ‘Yeah, but I love basketball more.'"

“I loved Dirk Nowitzki,” he added, "and Kevin Love, and Kobe Bryant, for sure.”

It didn’t take long for others to notice Mahmoud’s talent. After success playing with Egypt’s national teams, including taking second place in the 2013 International Basketball Federation's (FIBA) Africa Championship, Mahmoud said people started talking to him about playing in the United States. 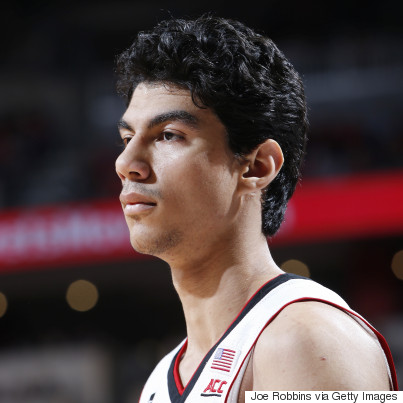 Mahmoud in a game vs. N.C. State in February.

“At the beginning, I didn’t really find it interesting for me,” he admitted. “Just because I was with my family, I had a nice life, and I was thinking more about engineering.”

Discussing his time in Egypt, Mahmoud spoke of the unrest that was sweeping his country. Egypt had endured violence and revolution in the years prior to his departure, with former President Hosni Mubarak stepping down in 2011 amid the Arab Spring demonstrations. At the height of the strife, Mahmoud's younger brother got caught between police and demonstrators. "He was trying to just go back home," Mahmoud said, "but he was alone and he couldn’t really find his way."

The brothers eventually made it home safely. But Mahmoud says that caution and concern were part of everyday life during that time -- and for once, his height was not an advantage.

“My dad won’t allow me to go anywhere because he knew that I can get hurt and he’s like, ‘You’re tall and you’re the first one they’ll look for,’” Mahmoud said, laughing. “He’s always told me that.”

Ultimately, Mahmoud did decide to go to the U.S. He explained that he moved because he would be able to play basketball, but would also get a good education and could still work towards becoming an engineer if he wanted.

President Mohammed Morsi was overthrown in the summer of 2013 after a year in power, leading to another period of unrest and tension. By the end of that year, Mahmoud had left to attend West Oaks Academy in Orlando, Florida, where he played for the school’s basketball team. He said that by that time, most of the violence in Cairo had settled.

Less that two years later, he’s at the University of Louisville (where he ended up studying engineering after all), playing in his first March Madness tournament for Hall of Fame Coach Rick Pitino. Still learning to play at the elite levels of college basketball, Mahmoud is not the star of the school's program: He ended his first regular season averaging about 8 minutes and just one point a game. But Pitino has said that Mahmoud is improving.

Mahmoud’s family hasn’t been able to visit him since he came to America. And he’s only been back to Egypt once, last summer, to stay with his family while attending his sister’s wedding. It's been tough on his mom, he said, but FaceTime allows them to talk every day, and his family can watch his games online.

And it’s through sports that he feels he makes a difference, by helping to make basketball more popular in his home country.

He's starting within his own family. Mahmoud said that his younger brother, who is 16, is also planning on coming to the U.S. for what will be his sophomore year of high school. As the big brother, Mahmoud said he's helping to find what high school program will be best, and hopes to keep him close by in Louisville, Kentucky.

"I think [for] him to be around me more, especially in the first couple years, would be much better for him," Mahmoud said, noting that his brother is a good basketball player and has a good upper body.

Mahmoud likely won’t enter the NBA Draft this year, acknowledging that he needs to work on his game and “get more muscles and just get stronger.”

Mahmoud, a freshman, is a forward for the Louisville Cardinals. (Source: YouTube)

But even though he was initially hesitant about coming to the U.S. for basketball, Mahmoud now says his dream is to play in the NBA one day. If he does, he will be following in the footsteps of Portland Trail Blazer Alaa Abdelnaby, the only Egyptian to play in the league. (Abdelnaby, unlike Mahmoud, had been living in the U.S. since he was two.)

Heading into Friday’s game against No. 8 N.C. State, Mahmoud has more than just basketball on his mind.