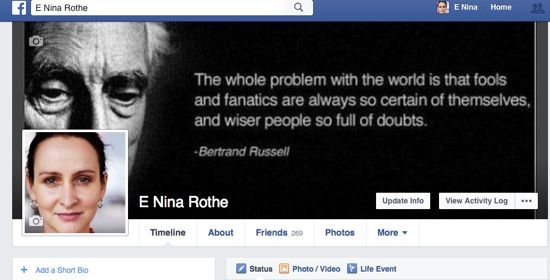 When I first joined Facebook in 2007 I was excited, like I'm sure most of us were at that first login. Here was the latest creative platform, a place to make new friends and reconnect with old ones, it seemed like the perfect online relationship. Plus, that communal wall (remember that?) where I could post my latest blog entries was the ideal professional tool for a writer in search of an audience.

Fast forward eight years and the love affair has dwindled for me. I'm not sure when this descent started, into thinking Facebook was hazardous to my health and my sanity -- but most of all to my relationships with those few persons I call my real friends, in real life.

What I do know is the drop that made the proverbial bucket overflow came with the recent Paris attacks. Part of me wanted to mourn, for a city that had been victimized by violence, for friends who lost their loved ones and for a European sense of safety that no longer exists. But here were some Facebook "friends" who completely missed my point and instead wanted to argue about details and be right -- knowing as little about anything as I probably did.

One dear friend's friend, Vittorio Coccoletti, world traveler and owner of a travel agency, used a Venetian saying to express it all on his wall, "El saòn no'l sa gnente, l'inteligente el sa poco, l'ignorante el sa tanto, el mona el sa tuto!" It translates to, "The sage knows nothing, the intelligent one knows little, the ignorant one knows much and the imbecille knows everything." He premised it by pointing out, sarcastically, that he'd never realized all his Facebook friends were such geopolitical, cultural and religious experts, especially those whose longest trip in life had been to a town a few miles from where they lived, on their high school class trip. I couldn't have said it better. Really.

The Paris attacks and its aftermath reminded me of our tragic September 11th 2001, where I was and what I did. But also how I dealt with the immense grief that comes with knowing thousands of fellow New Yorkers died in such horrible ways, and the haunting combination of realizing I would never see those two beloved buildings from my window again, combined with the constant burning smell in the East Village where I lived. Back then, I didn't have Facebook, the social network wasn't even a twinkle in its creators' eyes -- in fact at the time I didn't own a computer yet. I remember walking outside, stepping onto the reality of the streets and dealing personally with the tragic sights, sounds and smells. But most of all, I remember I communicated, face to face with my fellow citizens. We lived, even in the wake of death and destruction, we offered our humanity, not a bunch of useless articles followed by comments that couldn't possibly explain anything to anyone. Oh, and we didn't need to change our profiles to red, blue and white. Because we hung our real, fabric, oversized flags from our fire escapes, like the monumental sorrow that decorated our real, live faces.

Person to person, we didn't challenge how right or wrong our reactions were, we didn't dare one another to feel more sorrow for those who lost loved ones in the January earthquake in Gujarat, India that killed tens of thousands, or the soccer stampede that left more than a hundred people dead in Ghana, in early May -- all events that also happened in 2001. We understood deep down, unspoken, that tragedies get us more when they hit close to home, and anyway we didn't need to prove anything by spewing our "knowledge" over the world wide web.

We were human then.

I announced my decision to quit on my Facebook feed ten days ago, so people could email me or keep in touch through Twitter, a platform I still find an enormous source of information and knowledge -- immediate and sane for the most part. In the past few weeks I've noticed that most of my Facebook "friends" don't comment or even "like" any of my writing, but will fall all over each other, with their virtual tongues hanging out, to like, and even share other articles I post, by respected colleagues. It's insulting of course, but I'm a big girl.

My "announcement" was received with a few "why?", a couple of likes and some direct messages to my inbox. Close friends announced how difficult it would be for them to keep in touch since they "don't like to use email and Facebook is so convenient"; some wrote to say "good luck" as if I was going to climb Mount Everest and may never come back; others yet asked why, privately. At that point I was ready to close my account, and even found this handy YouTube video to help me do it quickly and quietly.

Then two men, both filmmakers -- and this is not by accident, as I believe filmmakers could heal the world -- both people I admire though I've only met one in real life, wrote to me with their thoughts. One argued that I should remain on Facebook as a cultural activist, to change the way people view cinema and life. It's the reason I write, and his message made me tear up. The second filmmaker pointed to the great unifying power of Facebook, how he was able to keep in touch with his friends around the world through the medium. Both men made sense, both coincidentally Italian, where perhaps the power of a social network that helps us connect further is appreciated. We still go to a café to talk for hours but these days we message each other with directions and times on Facebook, Italian style.

After their kind messages, finally Facebook seemed less a place where useless revolutions were started, where terrorist organizations organize, and more about a community of like-minded people around the world. I started to doubt my decision to quit. But I knew I needed a change.

I needed it because I was becoming intolerant. Intolerant from the strange feeling that opening my FB feed every morning provoked, this bombardment of information about people I hardly knew or not at all in some cases. I mean, those 2,000 odd "friends" more or less, would show their lives, from breakfast to marriages, from babies to cruises around the world, from their search to find themselves in Bali to where to find their favorite green tea in Baghdad, and I didn't know what to do with that. In the past, I remember talking on the phone with my best friend and we'd share little bits of information. Now, I stare at a screen with a cacophony of images and thoughts that I'm unable to process. Not this fast, not these many and not this frequently anyway. As Carmelo Bene, a beloved Italian cultural figure, used to say, "the wings of stupidity have brushed up against me!" In my case daily, globally and invasively.

In cinematic terms -- which is how I always like to view the world -- it's like comparing Fellini's La Dolce Vita (real life) with Sorrentino's La Grande Bellezza (Facebook life). Both are cinematic, both great works by talented filmmakers, but nothing can come close to the subtleties and achievements of real life, and its wondrous shades of grey.

The best way to get back to the roots of Facebook, I decided, was to unfriend. As I went through the list of my "friends" striking left and right, I realized at least 70 percent of them I didn't even recognize. Some had changed their names to something cute like "That One" (first name "That", last name "One"?) others had tragically died. Even death doesn't stop Facebook because closing one's account requires that person to do it him or her self... And if you're dead, having taken your password to the next world with you, your account lives on forever. Others yet took more than one action to unfriend, they just wouldn't let go I guess. But I'll admit I got the most pleasure out of canceling forever from my virtual life those who know me personally and never bothered to ask me if I got through a horrible time in my life three years ago OK. Or even better, those whose work I've supported with my writing and who never payed that favor back. "Unfriend"? Am I sure? Yes, yes, oh yes.

In the end, I went with what I always prefer, the middle ground, that comfortable shade of grey, not the extremes.

So I'm still on Facebook. I've got 200 plus connections, and I enjoy writing to my best friends on Messenger every morning. I share some things from my life, and work, and look forward to seeing updates from people I know and respect, scattered around the world. My morning coffee these days I drink with Lisa in Florence, Eduard in NYC, Gunnar in Berlin and Tsemaye in Stockholm, peeking at their updates on my feed. It's heartwarming.