Recently on the Huffington Post we came across a disturbing article - an attack by Jeffrey Smith on two respected university professors who apply a critical eye to the claims made by various advocates alleging dangers to human health linked to genetically modified organisms (GMOs.)

Smith, if you are not familiar with him, heads up a one-man band rabidly anti-GMO organization known as the Institute for Responsible Technology--he and his organization are controversial to say the least, but more on that later.

The subject of the attack piece was co-written by University of Illinois emeritus professor Bruce Chassy and University of Melbourne geneticist David Tribe. It appears on the website of AcademicsReview, an independent non-profit set up by the scholars to address the maelstrom of misinformation that passes for debate on the GMO issue. In one of their most pointed and heavily circulated critiques, Chassy and Tribe examine one of Smith's two self-published books that supposedly 'prove' that GMO foods are reckless and dangerous.

Chassy and Tribe's critique titled "Yogic Flying and GM Foods: The Wild Theories of Jeffrey Smith," addressed each of the 65 major claims Smith makes about the safety of GMOs, using peer reviewed research and fact-based evidence to refute every one.

Smith's response in the Huffington Post defends his claims by citing the example of the FLAVR SAVR™ tomato. Let's take a closer look at Smith's "new" claims. 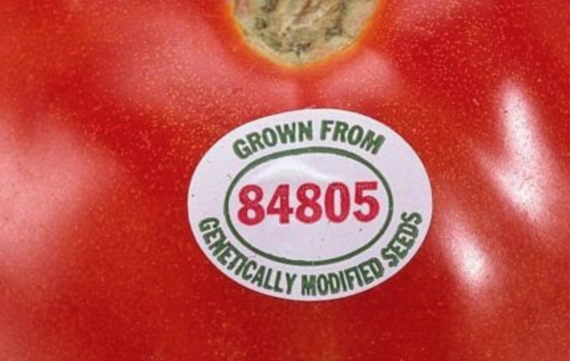 It is not clear why, in 2015, Smith would choose to mount an argument claiming dangers from "GMOs" based on an obsolete tomato variety developed more than 25 years ago that has been off the market for two decades. But Smith chose to defend his mistaken and falsified claims that the Food and Drug Administration had botched its review of the tomato and suppressed warnings from its staff about alleged dangers.

The first thing to note is that three of Smith's ten embedded links to comments by FDA officials supposedly casting doubt on the safety of the tomato or the review process don't work. In any case, what Smith leaves out is worth noting.

The FLAVR SAVR™ tomato, developed by Calgene, was the first "bioengineered" food ever reviewed by FDA. At that time FDA had no formalized process for such reviews, so, typically, officials bent over backwards to make sure they didn't miss anything that might be important or relevant.

Among other things, FDA scientists did not yet have a clear view of what kind of tests were needed to ensure safety and much of the back and forth among agency scientists that Smith argues is evidence of corruption and bad faith is, in context, simply and obviously, the record of folks trying to figure out how to get it right. This is evident to those who read the documents without presupposing conspiracies and evil intent. Read through the documents Smith cites yourself and see what you think. But read them all, from beginning to end; don't short cut. The full, boring, bureaucratic context is, in fact, the essential point.

Smith refers to a selected compilation (i.e. "cherry picked") of FDA documents he claims supports his case. The specific "smoking gun" supposedly proving the dangers of this tomato is that in a total of 39 studies involving 456 rats, 12 animals fed the tomatoes showed "erosions" in their digestive tracts. The question is whether these were caused by eating the tomatoes, or by something else, such as the feeding procedures or stress on the animals because of their confinement, both plausible explanations. Without corroborating evidence, Smith insists the tomatoes were at fault, and he cites documents long available in the public record as evidence that facts were suppressed. But the documents, in their entirety, show the opposite of what Smith claims; the FDA reviewed all of the available data and affirmed the safety of the tomato.

One of us (Val Giddings) read these documents when they first came out as he was at the time a regulator in the biotech products division of the U.S. Department of Agriculture, and had been peripherally involved with USDA's review of the Calgene tomato. The documents didn't support Smith's conspiracy theories then and that hasn't changed in the 22 years since.

Consider item 15 on Smith's list (chosen entirely at random as one of his few cited links that actually worked). Smith has offered it as one of many documents showing a conspiracy to suppress findings of dangers to consumers of the tomato. What does it show? Read it in its entirety for yourself and reach your own conclusions. If you do, you will find this statement, from an FDA official summarizing for his superiors:

All I can do is state my opinion that the data does not show any real toxicity. The requirements that one should have in this data (and in data generally) for a real finding [of toxicity] are:

At least two things stand out that are worth emphasizing: first, Smith claims the observed lesions were caused by the tomatoes, yet they were also seen, in the first experiment, in control rats that were not exposed; second, in the repeat experiment, no lesions at all were noted. This argues strongly against the tomatoes as the cause of the lesions seen in the first experiment, and suggests they were in fact an accidental result of the experimental procedures, which involved inserting a feeding tube down the throats of the rats - a technique that requires skill, and is easy to get wrong.

Bottom line: FDA evaluators considered all the data, compared observations to what would be expected if the tomatoes were in fact the cause of the lesions, and when things didn't add up, they concluded, following well established principles of toxicology, that whatever caused the lesions it wasn't the tomatoes. And they documented their analysis and conclusions for the record. End of story.

But Smith disputes FDA's conclusion, despite the clear absence of any of the signs that would be expected if the tomatoes were in fact guilty, as enumerated above. Now Smith may sincerely believe FDA got it wrong, but there is nothing in the record to support his belief, and the science does not back him up.

To claim that there are no new potential health hazards from GMOs is absurd. Fran Sharples, the Director of the Board on Life Sciences at the US National Academy of Sciences (NAS), told me, "The academies have issued numerous reports on assessing the risks of transgenic plants. If the academy believed there were no such potential risks, why would we have delved into these matters in these reports?"

This is intriguing. Fran Sharples has been working in this area for three decades. She has a well-deserved reputation for probity and professionalism. This comment does not sound like something she would say (if only for its clumsy phrasing). So, having known Dr. Sharples for three decades, we reached out to her and asked if Smith's quote was accurate. Her reply:

To be perfectly honest, I have no recollection of ever talking to this guy or of making such a statement. For all I know, he made it up. It's a mystery and a bit unsettling to find my name in print in association with something I have no memory of.

It is also worth pointing out that the words Smith attributes to Dr. Sharples make no sense to anyone familiar with how the National Academy of Sciences works. The Academy generally does not pick and choose the topics of its studies, but rather responds to requests to examine issues, most often from government agencies. The Academy enlists

...the aid of the nation's most knowledgeable scientists, engineers, health professionals, and other experts who volunteer their time to produce reports that have led to some of the most significant and lasting improvements in the health, education, and welfare of all the world's citizens.

It is commonplace for U.S. Government Agencies under assault by parties unwilling to follow where the data leads to request an impartial third party review from the Academy, which has frequently happened on GMO related issues. But as the present case demonstrates, folks unpersuaded by data are difficult to persuade by examinations of data.

One might wonder what would motivate someone to embark on a campaign of hostility toward innovations in food and agriculture that have already delivered enormous benefits around the world, particularly to small farmers in developing countries? There doesn't appear to be anything in Smith's previous background as an accomplished ballroom dance instructor or practitioner of yogic flying (yes, see accompanying picture) that would lead one to anticipate such an obsession. 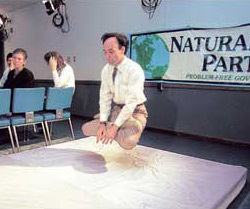 Perhaps it is related to his membership in the Maharishi religious cult that seems to make opposition to innovation in agricultural biotechnology one of its central tenets. Whatever Smith's motivation, the weaknesses of his claims are not repaired by his ineffective attempts in their defense.

At this point, it may be worth considering the credentials of the folks at odds here. David Tribe, a microbiology PhD, is a Senior Lecturer in microbiology, recognized around the world for his expertise in biotechnology and food safety, widely published and cited in peer-reviewed literature, and noted for his dedication to education and public service. Bruce Chassy, a biochemistry PhD, was a research chemist at the National Institutes of Health, received the Public Health Service Distinguished Service Award, served as Professor and Head of the Department of Food Science and Human Nutrition at the University of Illinois, and as a food safety expert on the FDA's Food Advisory Committee.

Jeffrey Smith? His expertise in relevant areas is more quickly catalogued: he has none. He has two self-published books and a self-produced documentary narrated by the wife of Dr. Oz on the topic. He speaks to rabidly anti-GMO audiences around the world with a degree of passion and enthusiasm that does not embrace critical and rigorous engagement with the data. One is free to choose who one thinks is credible, but if you place value on competence and expertise, it is clear whose opinions are worthy of consideration.

L. Val Giddings is a Senior Fellow with the Information Technology and Innovation Foundation. He is a genetics PhD with 3 decades of global experience in the science, policy, and regulation of innovations in agricultural biotechnology.