I spoke to Cherie Shirey, Assignment Manager for TV station KTVA in Anchorage and she made the following statement...

"These internet rumors are very bizarre. We worked with Governer Palin many times in 2008. Our reporters worked her on location and in the studio and I worked with her myself. She was definitely pregnant. You could see it in her belly and her face. The whole idea that Sarah Palin wasn't pregnant with Trig is completely, absolutely absurd. "

It's a KTVA reporter in this picture with Governor Palin. Shirey confirmed the photo was taken in April, 2008. 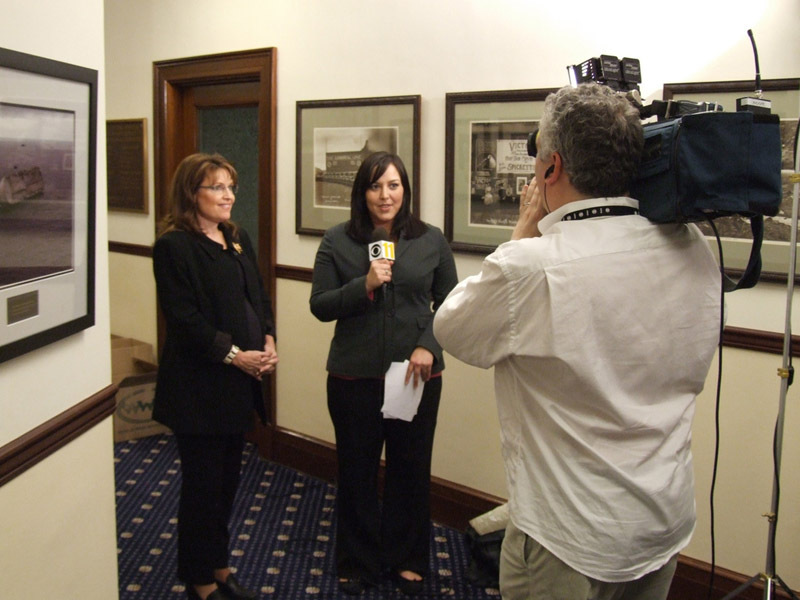 Update: The picture was taken in 2008. This is confirmed.

However, a commentator points out that according to this link from Flickr, the picture WASN'T taken in 2008 but in fact seems to have been taken in March, 2005.

Here's why the March, 2005 is wrong - that camera wasn't announced until the end of July 2005. So now the conspiracy involves TIME TRAVEL, as well!

The time problem is why I called in the first place. The photo is from when Palin was Governor, end of the 2008 session, multiple witnesses, video tape...all the things sane people need to come to reasonable conclusions.

The incorrect 2005 date is easily explained - they didn't set the date correctly. I've done that. Look at these Piroshkis that Flickr says I took digital photos of in 1972, when I was seven years old! Those things are delish, by the way.