A strange "magical" amulet dating back about 1,500 years has archaeologists buzzing.

One side of the stone amulet, which was unearthed in 2011 in the ancient city of Nea Paphos in southwestern Cyprus, bears a 59-letter inscription that reads the same way backward and forward:

That's Greek to you, of course. So here's the palindrome's English translation: "Yahweh is the bearer of the secret name, the lion of Re secure in his shrine." 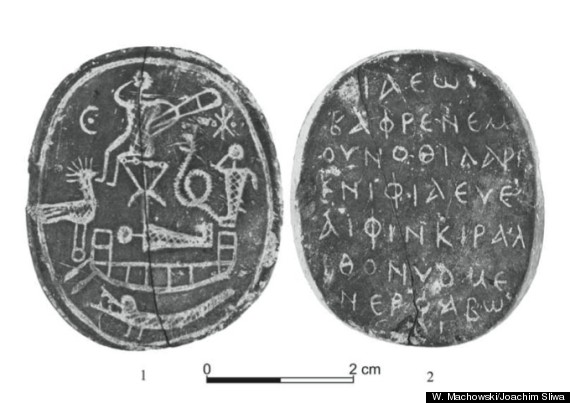 The other side of the amulet shows several images, including one depicting the mummified Egyptian god Osiris in a boat and another of Harpocrates, the Greek god of silence, as well as animals and symbols.

If that sounds a bit jumbled, it is.

"It must be stated that the depiction is fairly unskilled and schematic," Dr. Joachim Sliwa, a professor at Jagiellonian University's Institute of Archaeology in Krakow, Poland, wrote in a paper describing the artifact. "It is iconographically based on Egyptian sources, but these sources were not fully understood by the creator of the amulet. As a result, various misinterpretations and irregularities arise... we are dealing with considerable deviations from basic Egyptian iconographic concepts."

Such amulets were used as good luck tokens to protect their owners from harm, Ewdoksia Papuci-Wladyka, the Jagiellonian University professor who led the team of archaeologists who made the discovery, told LiveScience in an email. This particular one suggests that "Christian and pagan religions coexisted in Paphos in times of [the] amulet being in use," she said in the email.

The paper was published in the journal Studies in Ancient Art and Civilization.