A recently re-discovered papyrus amulet dating from the 6th century may offer a fascinating glimpse into early Christian life.

Lecturer Roberta Mazza encountered the 1,500-year-old document while researching in the University of Manchester's John Rylands Library. As a classicist and historian, Mazza told HuffPost, she quickly recognized its significance.

Among the first words she deciphered was "manna", the biblical bread of God. After translating the rest Mazza said it was clear the parchment relayed a "patchwork" of passages from the Old and New Testaments.

"The character of the text is such that it looks like a charm to protect from evil," Mazza told HuffPost. 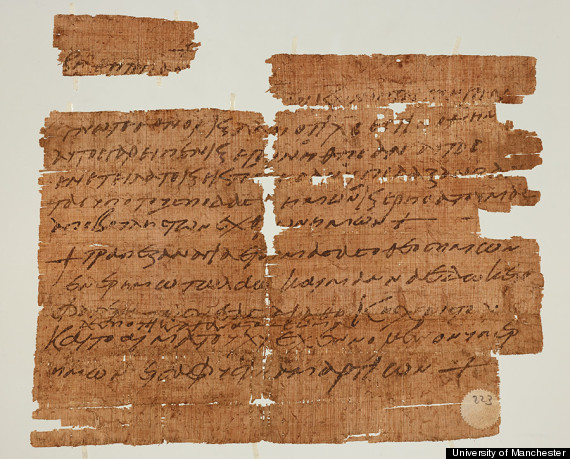 Amulets are typically objects believed to possess special qualities that offer protection and good fortune to the bearer. Thus the use of charms and amulets as a way of warding off evil might seem surprising, but it was actually common among early Christians, Mazza said.

Included in the amulet is Psalms 148:5 which proclaims the power of God, followed by a passage from Matthew that tells the story of the Last Supper.

Whoever made the amulet -- which was written on the back of a tax receipt -- had some degree of literacy, Mazza said, and may have been a member of the clergy. The writer also most likely did not copy the passages directly from the Bible but rather transcribed them from heart.

This, along with the fact that the amulet would have been worn around the neck or kept in the home, suggests that early Christians were interacting with the Bible in a fluid manner, Mazza said.

"Nowadays we think of the Bible as this fixed work where every word is in such precise place," Mazza said. "A piece like this is telling us that the knowledge of the Bible was transmitted much more through words, liturgy, prayers and amulets than through a book."