MARINA, Egypt (AP) - Today, it's a sprawl of luxury vacation homes where Egypt's wealthy play on the white beaches of the Mediterranean coast. But 2,000 years ago, this was a thriving Greco-Roman port city, boasting villas of merchants grown rich on the wheat and olive trade. (Scroll down for photos)

The ancient city, known as Leukaspis or Antiphrae, was hidden for centuries after it was nearly wiped out by a fourth century tsunami that devastated the region.

More recently, it was nearly buried under the modern resort of Marina in a development craze that turned this coast into the summer playground for Egypt's elite.

Nearly 25 years after its discovery, Egyptian authorities are preparing to open ancient Leukaspis' tombs, villas and city streets to visitors -- a rare example of a Classical era city in a country better known for its pyramids and Pharaonic temples.

"Visitors can go to understand how people lived back then, how they built their graves, lived in villas or traded in the main agora (square)," said Ahmed Amin, the local inspector for the antiquities department. "Everyone's heard of the resort Marina, now they will know the historic Marina."

The history of the two Marinas is inextricably linked. When Chinese engineers began cutting into the sandy coast to build the roads for the new resort in 1986, they struck the ancient tombs and houses of a town founded in the second century B.C.

About 200 acres were set aside for archaeology, while everywhere else along the coast up sprouted holiday villages for Egyptians escaping the stifling summer heat of the interior for the Mediterranean's cool breezes.

The ancient city yielded up its secrets in a much more gradual fashion to a team of Polish archaeologists excavating the site through the 1990s.

A portrait emerged of a prosperous port town, with up to 15,000 residents at its height, exporting grains, livestock, wine and olives to the rest of the Mediterranean.

Rainwater collected from roofs ran down special hollowed out pillars into channels under the floor leading to the family cisterns. Waste disappeared into a sophisticated sewer system. Around the town center, where the two main streets intersect, was the social and economic heart of the city and there can still be found the remains of a basilica, a hall for public events that became a church after Christianity spread across the Roman Empire.

A semicircular niche lined with benches underneath a portico provided a space for town elders to discuss business before retiring to the bathhouse across the street.

Greek columns and bright limestone walls up to six feet high (2 meters) stand in some places, reflecting the sun in an electric blue sky over the dark waters of the nearby sea. Visitors will also be able to climb down the steep shafts of the rock-cut tombs to the deeply buried burial chambers of the city's necropolis.

It is from the sea from which the city gained much of its livelihood. It began as a way station in the coastal trade between Egypt and Libya to the west. Later, it began exporting goods from its surrounding farms overseas, particularly to the island of Crete, just 300 miles (480 kilometers) away -- a shorter trip than that from Egypt's main coastal city Alexandria.

And from the sea came its end. Leukaspis was largely destroyed when a massive earthquake near Crete in 365 A.D. set off a tsunami wave that also devastated nearby Alexandria. In the ensuing centuries, tough economic times and a collapsing Roman Empire meant that most settlements along the coast disappeared.

Today, the remains of the port are lost. In the late 1990s, an artificial lagoon was built, surrounded by summer homes for top government officials.

"It was built by dynamite detonation so whatever was there I think is gone," said Agnieszka Dobrowlska, an architect who helped excavate the ancient city with the Polish team in the 1990s.

However, Egyptian government interest in the site rose in the last few years, part of a renewed focus on developing the country's Classical past. In 2005, Dobrowlska returned as part of a USAID project to turn ancient Marina into an open air museum for tourists.

It couldn't have come at a better time for ancient Marina, which had long attracted covetous glances from real estate developers.

"I am quite happy it still exists, because when I was involved there were big plans to incorporate this site in a big golf course being constructed by one of these tycoons.

Apparently the antiquities authorities didn't allow it, so that's quite good," recalls Dobrowlska. Redoing the site is part of a plan to bring more year-around tourism to what is now largely a summer destination for just Egyptians -- perhaps with a mind to attracting European tourists currently flocking to beaches in nearby Tunisia during the winter.

Much still needs to be done to achieve the government's target to open the site by mid-September, as ancient fragments of pottery still litter the ground and bones lie open in their tombs.

But if old Marina is a success then similar transformation could happen to a massive temple of Osiris just 30 miles (50 kilometers) away, where a Dominican archaeological team is searching for the burial place of the doomed Classical lovers, Anthony and Cleopatra.

"The plan is to do the same for Taposiris Magna so that tourists can visit both," said Khaled Aboul- Hamd, antiquities director for the region.

These north coast ruins may also attract the attention of the visitors to the nearby El-Alamein battlefield and cemeteries for the World War II battle that Winston Churchill once called the turning point of the war.

In fact, there are signs the allied troops took refuge in the deep rock cut tombs of Marina, just six miles (10 kilometers) from the furthest point of the Axis advance on Alexandria. Crouched down awaiting the onslaught of German Gen. Rommel's famed Afrika Corps, the young British Tommies would have shared space with the rib bones and skull fragments of Marina's inhabitants in burial chambers hidden 25 feet (8 meters) below ground. 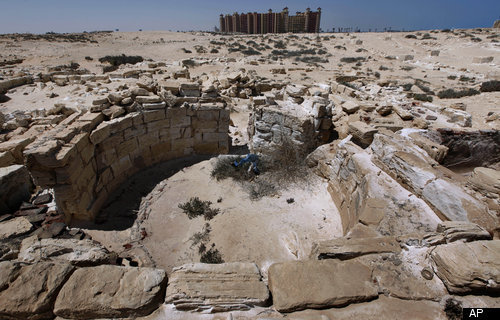 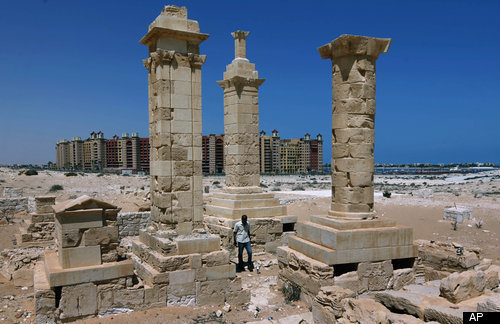 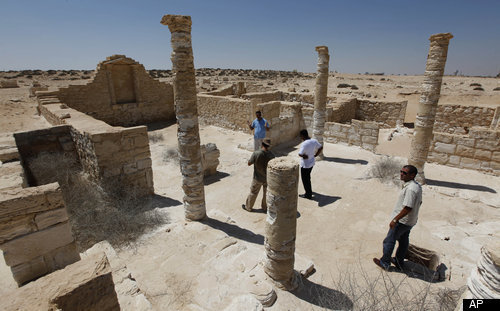 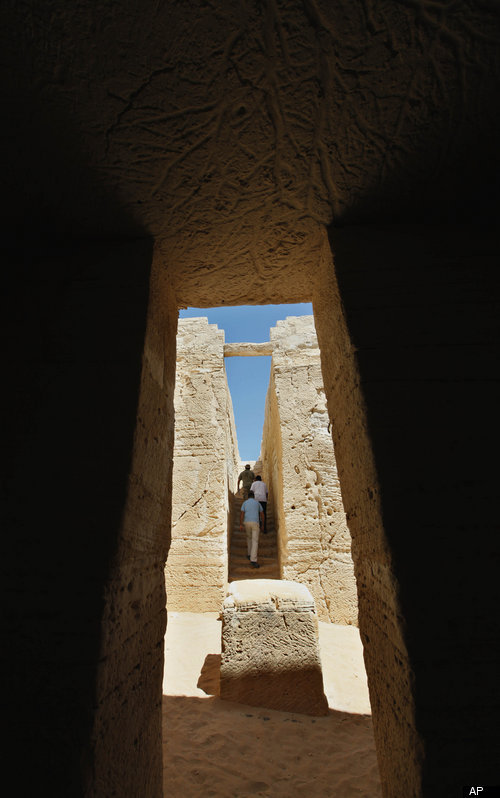