The most precise chronology of Early Egypt yet suggests the country formed much more quickly than previously thought.

The new finding reveals a robust timeline for the first eight kings and queens of Egypt, including, in order of succession Aha, Djer, Djet, Queen Merneith, Den, Anedjib, Semerkhet and Qa'a. The accession of King Aha to the throne is often thought to define the start of the Egyptian state, with the new study suggesting (with 68 percent probability) that he became king between 3111 B.C. and 3045 B.C.

Existing timelines of Egypt's transition from a nomadic community along the Nile River to a permanent state are mainly based on changes in pottery artifacts found at various locations around the country. However, such timelines are flawed due to the subjectivity required to distinguish one pottery style from another, and because styles might vary from site to site without signifying a change in time period. [See Photos of Egypt's Great Terrace of God]

To create a more reliable timeline, archaeologists based at the University of Oxford have developed the most comprehensive chronological analyses of Early Egypt artifacts yet based on a computer model of existing and newly measured radiocarbon dates. The analyses suggest the rise to statehood occurred between 200 and 300 years faster than previously thought, beginning between 3800 B.C. and 3700 B.C., rather than the past estimate of 4000 B.C. The findings, which also suggest the preceding Neolithic period lasted longer than thought, are detailed Sept. 4 in the Proceedings of the Royal Society A. 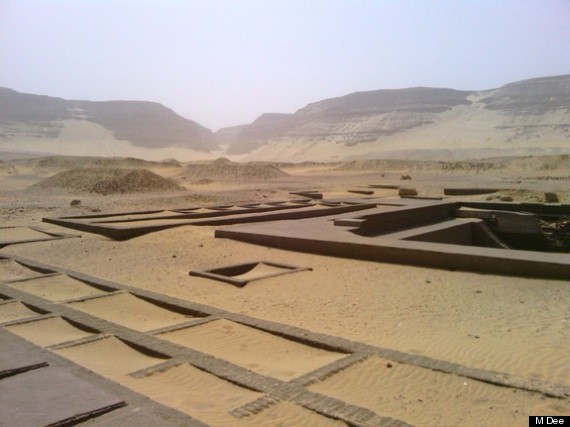 Monumental tombs of the Royal Cemetery at Abydos, Upper Egypt, where the First Dynasty kings of Egypt are buried.

"We got a whole lot more dates, did the model, and got the computer to work out what this means for when things actually happened," said Michael Dee, an archaeologist at the University of Oxford and a co-author on the paper. "Nobody had ever done that before."

The team analyzed organic material from artifacts obtained from museum collections that were not in good enough shape to go on display. The samples included animal remains, shells, plant material and charcoal.

"A lot of the stuff is not is particularly beautiful," Dee said. "It ends up in crates in storage, but a lot of that is gold dust for radiocarbon dating."

To determine the age of the materials, the team measured the amount of radioactive carbon-14 in each sample and used the known decay rate of carbon-14 to calculate an age. Such calculations are not exact and produce results that represent a window of time, usually ranging between 200 to 300 years or so. By placing the dates in a computer model, the team was able to identify distinct periods of overlap in artifacts from the same time period, producing narrower and more precise age windows.

Only very small quantities of material were needed for the analyses, ranging from roughly 10 milligrams – about the size of a fingernail clipping – for plant material, to as much as 0.5 grams (0.02 ounces) for bone.

Egypt was, by some standards, the world's first country as countries are known today. Other existing settlements at the time were isolated city-states, but Egypt developed into a more complex and expansive settlement similar to modern countries today, Dee said.

The team hopes that their results will help inform future research on Early Egypt culture, but does not have plans to produce more dates from Egypt.

"This is not the end of the road at all, but in terms of our work, we have done most of what we can do for now," Dee said.