A new study offers an answer to a key question about Egypt's ancient pyramids, which were built out of huge stone blocks more than 4,000 years ago: in the absence of modern construction equipment, how exactly were the builders of the massive structures able to move the stones across the desert to the building site?

Researchers have long known that ancient Egyptians hauled the stones on sledges. But the scientists behind the new study say that to keep the sledges from sinking into the sand, the workers saturated the sand with water before moving the sledges -- to form a more solid surface.

"The water forms liquid bridges that glue the sand grains together, as in a sandcastle," study co-author Dr. Daniel Bonn, a professor of physics at the University of Amsterdam, told The Huffington Post in an email. "The inspiration for the research was a tomb drawing that showed exactly this."

An ancient drawing found in the tomb of Djehutihotep shows a large statue being transported by sledge. A person standing on the front of the sledge wets the sand.

The drawing in question, found at the tomb of Djehutihotep, depicts a person standing on the front of a sledge, pouring water over the sand just in front of it. To test the technique, the scientists compared pulling a mini-sled over dry sand to pulling it over wet sand.

What did they find? The effort required to pull the sled over wet sand was significantly lower. 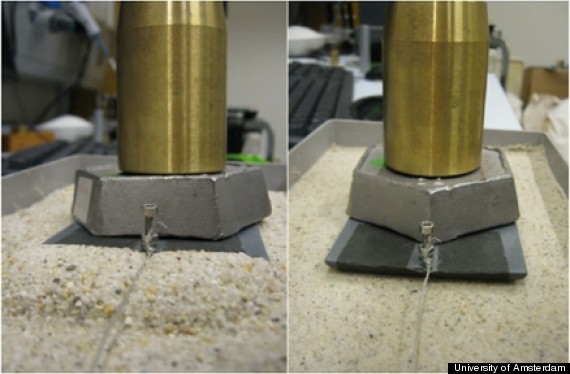 The setup in the lab. A large pile of sand accumulates in front of the sledge when this is pulled over dry sand (left). This doesn't happen on wet sand (right).

This study was published online in the journal Physical Review Letters on April 29, 2014.