The closest known relative of the ancestors of limbed animals such as humans likely evolved the foundation for rear legs even before the move to land, researchers say. This ancestor may have even been able to walk underwater, they added.

These findings reveal that a key step in the evolution of hind limbs happened in fish, challenging previous theories that such appendages evolved only after the move to land.

Scientists investigated fossils of a 375-million-year-old fish known as Tiktaalik roseae, discovered in 2004 in northern Canada's Ellesmere Island. Possessing a broad flat head and sharp teeth, Tiktaalik resembled a cross between a fish and a crocodile, growing to a length of 9 feet (2.7 meters) as it hunted for prey in shallow freshwater. [See Images of Bizarre Tiktaalik Fish Fossils] 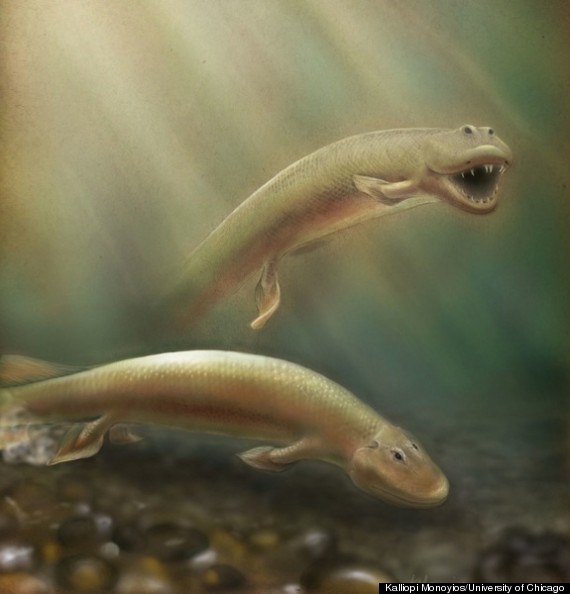 Scientists investigated fossils of a 375-million-year-old fish known as Tiktaalik roseae, discovered in 2004 in northern Canada's Ellesmere Island, finding they may have evolved rear legs before moving to land.

This ancient creature was undoubtedly a fish, possessing gills, scales and fins. However, it also had features seen in modern tetrapods — four-limbed creatures like amphibians, reptiles, birds and mammals — such as a mobile neck and robust ribcage.

This extinct fish had large forefins and shoulders, elbows and partial wrists, enabling it to support itself on ground. This makes it the best-known example of an intermediate between finned animals and limbed animals marking the evolutionary leap from water to land for vertebrates, or creatures with backbones.

Prior analyses of other fossils dating from the water-land transition found their back appendages were small and weak compared with their front appendages. This suggested the earliest ancestors of tetrapods perhaps had a "front-wheel drive" form of locomotion that depended more on their front limbs, and that a "four-wheel drive" form of locomotion with strong hips and back limbs only developed after tetrapods evolved.

Until now, the only specimens of Tiktaalik researchers had examined were of its front portions. To find out more about the fish, researchers investigated additional blocks of rock recovered from the dig site where Tiktaalik was discovered. Although some of these blocks were first excavated in 2004, researchers did not look at them more closely until recently, mainly because the blocks did not seem to contain much bone. Moreover, it took years to carefully and properly remove the rock surrounding the fragile fossils.

The scientists discovered the rear portion of Tiktaalik, which contained hips as well as partial pelvic fin material. This made a direct comparison of the front and rear appendages of the animal possible. [10 Useless Limbs (and Other Vestigial Organs)]

"I was expecting to find a diminutive hind fin and pelvis,"study lead author Neil Shubin, a paleontologist at the University of Chicago,told LiveScience. "Seeing the whopping pelvis set me back a bit — I looked at it again and again, because I was quite surprised."

The pelvic girdle of Tiktaalik was nearly identical in size to its shoulder girdle, a tetrapodlike feature that would help support strong rear appendages. It also possessed a deep ball-and-socket hip joint that connected to a highly mobile femur — analogous to a tetrapod thighbone — that could extend beneath the body.

In addition, crests on the hip bone served as points for muscles to attach to, indicating strength and advanced fin function. Furthermore, although no femur bone was found, the fossil pelvic fin material they did unearth included long fin rays, suggesting the back fin was at least as long and as complex as its front fin.

"We had long thought that expanded hind limbs and hips were features of limbed animals," Shubin said. "Tiktaalik shows that our closest fish relatives had expanded hips and hind fins; hence, this feature may well have arisen in fish."

Shubin cautioned that Tiktaalik is not the ancestor of all limbed vertebrates. It is currently the closest known relative, "but not the sole, direct ancestor," he said. "It is more like our closest cousin."

It remains uncertain how the hind appendages of the earliest limbed vertebrates were used. "Were they used to walk, swim or both?" Shubin asked.

The scientists detailed their findings online today (Jan. 13) in the journal Proceedings of the National Academy of Sciences.