At some point, our earliest ancestors stopped relying solely on foraging and scavenging and started to hunt, learning to stalk and kill their food. Prehistoric footprints found in Kenya may help pinpoint the moment that transition took place.

The footprints, found along a lake, were left behind by several of our Homo erectus ancestors roughly 1.5 million years ago and were first described in a 2009 study. Researchers determined that our forefathers walked much like humans do today.

But a more recent examination of the footprints suggests additional details about those ancestors' movements.

“What we can say is that we have a number of individuals, probably males, that are moving across a lake shore in a way that is consistent with how carnivores move,” Neil Roach, a palaeoanthropologist at the American Museum of Natural History in New York, told Nature.

Roach led a team to the site near the Kenyan village of Ileret, located close to the border with Ethiopia, and found 483 more prints, including those of hippos, crocodiles and birds. Among those imprints, they found 99 hominin prints made by the group of Homo erectus, according to an abstract of the research presented at the 2015 Paleoanthropology Society meeting in San Francisco.

A comparison shows one of the prints next to a modern human foot: 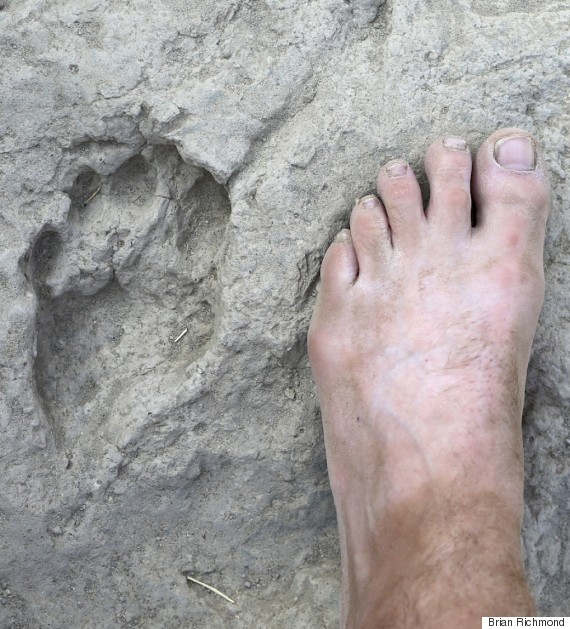 The prints were accumulated over just a few days, and reveal that the hominins were likely moving along the lakeshore in groups and "spent disproportionate amounts of time in near-water habitats, relative to where they died and were preserved."

Roach told Nature that the movements around the lake were similar to the movements made by other animals on the hunt, and the fact that they were all adult males suggested a level of cooperation. Specifically, he said they may have been cooperating in a hunt for antelope or wildebeest.

“Who knows what they’re doing there,” Curtis Marean, a palaeoanthropologist at Arizona State University in Tempe, told the journal. “It could be a group hunt, but it could also be lakeshore foraging.”