CHICAGO — The ancient Mycenaeans have a reputation as palace-builders and warriors, but they were also quite sophisticated cooks. More than 3,000 years ago, they used portable grill pits to make souvlaki and non-stick pans to make bread, new cooking experiments suggest.

The Mycenaean civilization, which was the backdrop for Homer's "Odyssey" and "Iliad," thrived in Greece during the late Bronze Age from around 1700 B.C. until the society mysteriously collapsed around 1200 B.C. The Mycenaeans left behind amazing palaces and gold-littered tombs at sites like Pylos and Mycenae, but in these places, archaeologists also have found less glamorous artifacts, such as souvlaki trays and griddles made from gritty clays.

It wasn't clear how these two types of pans were used, said Julie Hruby of Dartmouth College, presenting her research at the Archaeological Institute of America's annual meeting here on Saturday (Jan. 4). [The 7 Most Mysterious Archaeological Finds on Earth]

"We don't have any recipes," Hruby told LiveScience. "What we do have are tablets that talk about provisions for feasts, so we have some idea of what the ingredients might have been, but in terms of understanding how people cooked, the cooking pots are really our best bet." 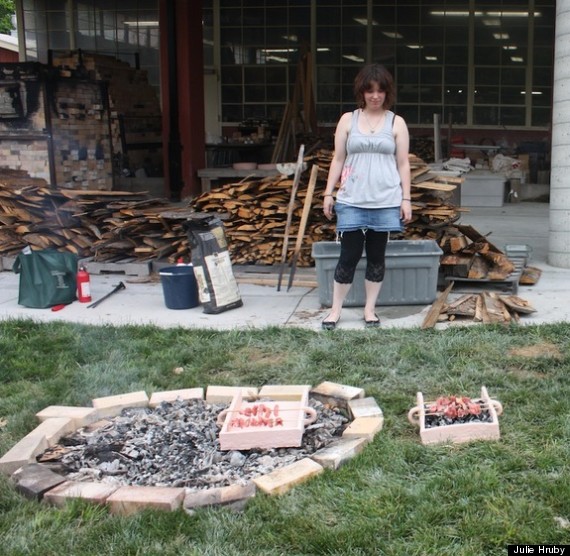 Researchers tested two possible ways Mycenaean ceramic pans would have been used to cook meat. The one on the right produced the best results.

The souvlaki trays were rectangular ceramic pans that sat underneath skewers of meat. Scientists weren't sure whether these trays would have been placed directly over a fire, catching fat drippings from the meat, or if the pans would have held hot coals like a portable barbeque pit. The round griddles, meanwhile, had one smooth side and one side covered with tiny holes, and archaeologists have debated which side would have been facing up during cooking.

To solve these culinary mysteries, Hruby and ceramicist Connie Podleski, of the Oregon College of Art and Craft, mixed American clays to mimic Mycenaean clay and created two griddles and two souvlaki trays in the ancient style. With their replica coarsewares, they tried to cook meat and bread.

Hruby and Podleski found that the souvlaki trays were too thick to transfer heat when placed over a fire pit, resulting in a pretty raw meal; placing the coals inside the tray was a much more effective cooking method.

"We should probably envision these as portable cooking devices — perhaps used during Mycenaean picnics," Hruby said. 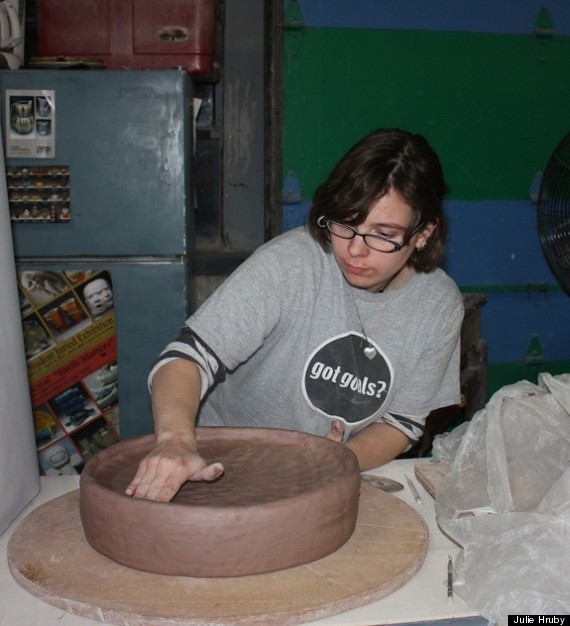 Griddles from the Mycenaean world often have one side with partial perforations and one polished side. The side with the holes proved to be more effective at cooking bread when researchers made replica griddles and tested them over the hearth.

As for the griddles, bread was more likely to stick when it was cooked on the smooth side of the pan. The holes, however, seemed to be an ancient non-sticking technology, ensuring that oil spread quite evenly over the griddle.

Lowly cooking pots were often overlooked, or even thrown out, during early excavations at Mycenaean sites in the 20th century, but researchers are starting to pay more attention to these vessels to glean a full picture of ancient lifestyles.

As for who was using the souvlaki trays and griddles, Hruby says it was likely chefs cooking for the Mycenaean ruling class.

"They're coming from elite structures, but I doubt very much that the elites were doing their own cooking," Hruby told LiveScience. "There are cooks mentioned in the Linear B [a Mycenaean syllabic script] record who have that as a profession — that's their job — so we should envision professional cooks using these."

Copyright 2014 LiveScience, a TechMediaNetwork company. All rights reserved. This material may not be published, broadcast, rewritten or redistributed. ]]>