The remains of an ancient human in China not thought to be Neanderthal has an inner ear much like that of humans' closest extinct relatives, according to a new study. These new findings could be evidence of interbreeding between Neanderthals and other species of archaic humans in China; however, the researchers say human evolution could be more complicated than is often thought, and the implications of the new discovery remain unclear.

Although modern humans are the only living members of the human family tree, a number of other human lineages once lived alongside the ancestors of modern humans. These so-called archaic humans included Neanderthals, the closest extinct relatives of modern humans, who lived in Eurasia roughly between 200,000 and 30,000 years ago. 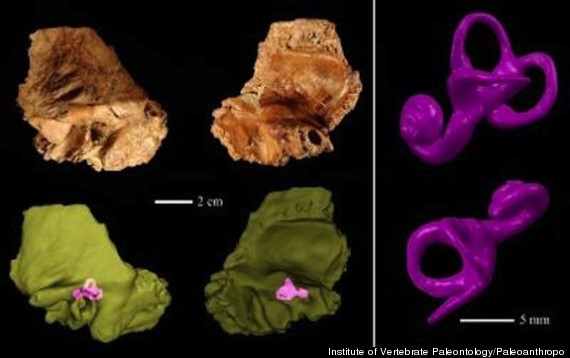 To learn more about human evolution, scientists investigated a 100,000-year-old human skull known as Xujiayao 15, found 35 years ago in northern China alongside human teeth and bone fragments. At first, the researchers thought that the skull belonged to an archaic human. But they discovered that, anatomically, the skull — and the fossils discovered alongside it — had characteristics typical of a non-Neanderthal form of archaic human. [Image Gallery: Our Closest Human Ancestor]

However, micro-CT scans of the skull revealed an inner ear much like those seen in Neanderthals.

"We were very surprised," Trinkaus told Live Science. "I said, 'My God, it looks like a Neanderthal.'"

The inner ear, also known as the labyrinth, is located within the skull's temporal bone. It contains the cochlea, which converts sound waves into electrical signals that are transmitted via nerves to the brain, and the semicircular canals, which help people keep their balance as they move. These semicircular canals are often well-preserved in mammal skull fossils, the researchers said.

"We fully expected the scan to reveal a temporal labyrinth that looked much like a modern human one, but what we saw was clearly typical of a Neanderthal," Trinkaus said in a statement. In comparison, none of the three other archaic human skulls they analyzed from different parts of China had this type of inner ear.

But while it is tempting to conclude that these findings demonstrate interbreeding between Neanderthals and archaic humans in China, Trinkaus and his colleagues suggested that the implications of the Xujiayao discovery remain unclear.

"You can't rely on one anatomical feature or one piece of DNA as the basis for sweeping assumptions about the migrations of hominid species from one place to another," Trinkaus said in a statement.

The scientists detailed their findings online today (July 7) in the journal Proceedings of the National Academy of Sciences.