This discovery adds to the evidence that people made it deep into the Americas much earlier than previously thought, scientists added.

Scientists concentrated on a tropical savannah region in the Bolivian Amazon that past researchers thought was too harsh of an environment for ancient peoples to inhabit. Hundreds of small, forested mounts of earth known as "forest islands" dot these lowlands, which are seasonally flooded by water. These forest islands were typically thought of as natural in origin — for instance, as landforms cut away by shifting rivers, or long-term termite mounds or bird rookeries.

Now, investigators have found that three of these forested islands are shell middens — piles of freshwater snail shells left by human settlers more than 10,000 years ago, according to carbon dating. The newfound site "is the oldest archaeological site in southern and western Amazonia," said researcher Umberto Lombardo, a geographer at the University of Bern in Switzerland. "This discovery alters the map of early human occupations in South America." [The 10 Biggest Mysteries of the First Humans]

What first surprised Lombardo about the forest islands he and his colleagues investigated was that "under the surface, there seemed to be rocklike material," he said. (The area has a dearth of rocks.) 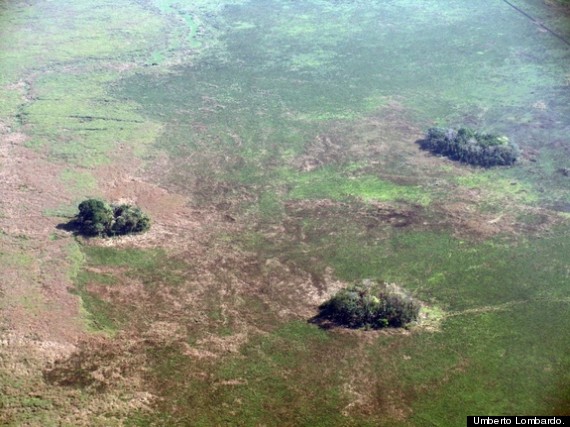 Small, forested earthen mounds scattered throughout the seasonal floodplains of the Llanos de Moxos in the Bolivian Amazon.

"On a closer examination, we saw that this hard material was some sort of shell deposit," Lombardo said. He then began to suspect it was artificial, because he could not think of any natural process that could have created such a deposit.

The first site the researchers investigated was named Isla del Tesoro, which is Spanish for "Treasure Island." There is a general belief in that area, known as the Llanos de Moxos in Bolivia "that if a foreigner is interested in excavating a site, then it must contain buried gold," Lombardo said. "Of course, there is no gold, but it is very important to work on your public relations with the local population before you start digging," he said. "If you don't explain very clearly what you are up to, they will think you are there to steal their gold."

Samples of soil collected from the three mounds revealed they were made of a dense collection of shells, bones and charcoal. They apparently formed in two phases — an older layer made up primarily of the shells of freshwater apple snails as well as the bones of deer, fish, reptiles and birds, and an overlying layer composed of organic refuse containing pottery, bone tools and human bones. [Photos: Uncovering a New Human Species]

Separating the two layers is a thin layer rich in pieces of burnt clay and earth. "My first impression is that it could be made of fragments of hearths, like ovens," Lombardo said. "Indigenous people in the region still cook in such ovens made of clay."

Radiocarbon dating of two of the middens reveals an ancient human presence during the early Holocene period approximately 10,400 years ago. The researchers suggest hunting and gathering forays brought prey there for preparation, cooking and eating; shells and other artifacts built up into mounds over approximately 6,000 years of human use. The hunter-gatherers may have eventually abandoned these sites as the climate shifted toward wetter conditions later. 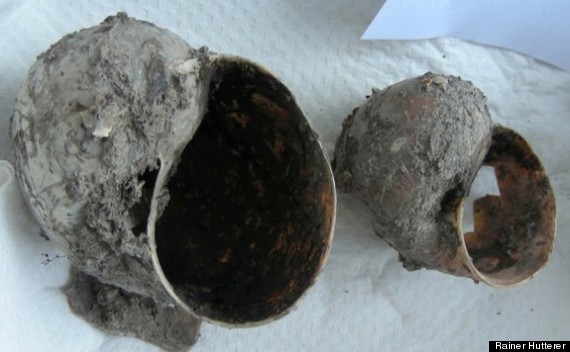 Freshwater snail shells from an archaeological excavation at a forest island in the Bolivian Amazon.

The scientists discovered these shell middens in Llanos de Moxos, which holds a dramatic number of ancient earthworks. The hundreds of large earthen mounds, and thousands of miles of raised fields and sophisticated drainage works in the area, suggest it was able to support relatively large populations in the past, and the researchers propose the predecessors of these "Earthmovers" may have created the newfound middens.

These findings might add to hotly debated theories that humans came to the Americas much earlier than previously thought. For most of the past 50 years, archaeologists thought the first Americans, dubbed the Clovis culture after sites found near Clovis, N.M., arrived about 13,000 years ago. However, scientists have recently uncovered evidence that humans were in the New World more than 14,000 years ago.

"Our discovery shows that people occupied the Llanos de Moxos in the Bolivian Amazon at least 10,500 years ago," Lombardo said. "To reach this location, people had to travel 6,000 kilometers (3,700 miles) if they came from the Atlantic coast, or they had to cross the Andes if they came from the Pacific Coast. This suggests that either they moved and adapted to new environments extremely fast or they started their journey quite a long time ago."

Lombardo and his colleagues now would like to investigate why people abandoned these forest mounds after 6,000 years of use. "The data we have indicates that about 4,200 years ago, an important environmental change took place," he said. "What caused this environmental change?"

The scientists detailed their findings online Aug. 28 in the journal PLOS ONE.