Researchers have made 3D reconstructions of two 300-million-year-old insect nymphs by putting the rare fossils under an X-ray.

The scientists have not pinned down the precise identity of either bug, or matched them with their adult counterparts, but they say their scans offer the most complete picture of baby insects from this prehistoric Paleozoic Era.

Both insects are just over 0.8 inches (2 centimeters) long and their fossils, which date to the late Carboniferous period (part of the Paleozoic Era), were found at Montceau-les-Mines in France. The researchers, led by Russell Garwood, of the U.K.'s University of Manchester, published their reconstructions online Sept. 25 in the journal PLoS ONE.

The scientists named one of the insects Anebos phrixos, drawing on the Greek words for "young" and "bristling," the latter of which alludes to the insect's defensive spines. The researchers did not name the other insect, but said it resembles a modern cockroach with a flat body that allowed it to squeeze into narrow crevices and avoid making shadows that might attract predators. 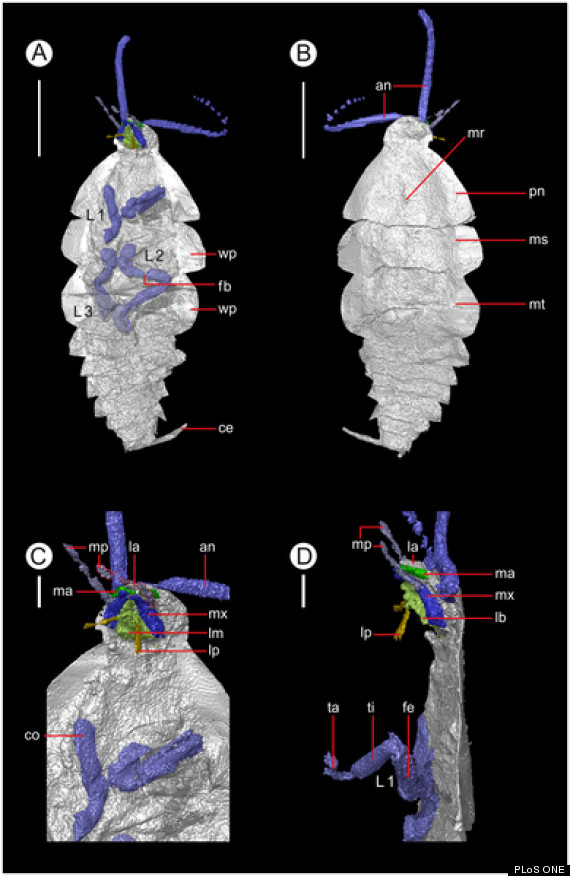 The roach-like nymph described in the study.

The 3D reconstructions also gave the researchers detailed pictures of the young insects' mouthparts, which hold clues about their diet. In the roach-like nymph, they found little evidence of specialization in its mandibles, maxilla and other parts, suggesting it ate just about anything.

"Much like modern forest roach nymphs, they could have eaten decaying and rotting matter on the forest floor," the scientists wrote.

Researchers have been turning to CT scans to analyze fossils in a non-invasive way. Another team reported Sept. 18 in the journal Paleontology that they reconstructed a spiny mollusk that creeped around the sea 390 million years ago with the same method. Taking their digital reconstruction a step further, they used a 3D printer to make a physical model of the sea creature. [See Images of Reconstructed Sea Creature]

Advertisement
Copyright 2012 LiveScience, a TechMediaNetwork company. All rights reserved. This material may not be published, broadcast, rewritten or redistributed.
More:
insectsscienceVideoUniversity of Manchesterscience news
Trending