The story of life on Earth keeps getting stranger. Researchers report they've discovered dormant algae and a thriving community of carbon-chomping fungus deep beneath the ocean floor in 2.7-million-year-old mud.

Genetic evidence indicates the most deeply buried fungi are distinct from wind-blown relatives at the planet's surface, suggesting the fungal communities are ancient and isolated.

"We've found strong evidence that fungi are alive and active and in the sub-seafloor," said William Orsi, a microbiologist at the Woods Hole Oceanographic Institution in Woods Hole, Mass., and lead author of the study describing the find, detailed online Feb. 13 in the journal PLOS One.

Beneath the ocean floor lives a vast community of microbial life researchers are only now starting to explore. Some scientists call it the "dark biosphere," and see the potential for a treasure trove of new potential drugs.

"Fungi can produce really interesting natural compounds, some of which are antibiotics," Orsi told OurAmazingPlanet. "Deep biosphere fungi are an untapped resource by the pharmaceutical industry." 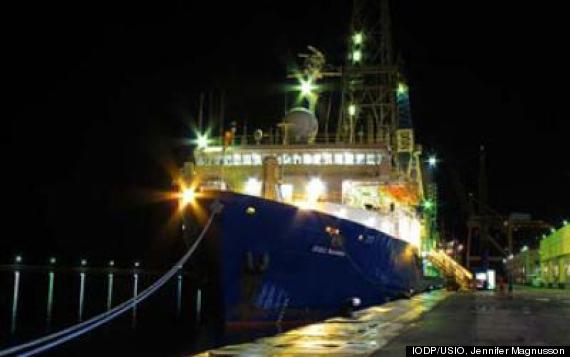 The drillship JOIDES Resolution in port in Barbados, just before the start of the expedition in September 2011.

Orsi examined sediments drilled from ocean basins around the world to better understand microbial life beneath the seafloor. The samples ranged from just below the seafloor surface to 157 feet (48 meters) deep.

Instead of searching through the deep-sea sludge for tiny creatures, Orsi looked for snippets of ribosomal RNA (rRNA), a proxy that shows microbes are metabolically active.

In the oldest, deepest sediments, from the Eastern Pacific Ocean, fungi predominated. The subsurface microbial community was more diverse closer to the surface, in younger mud, with metazoans, protists and plant material, or green algae.

The algae from the deep sediment present a puzzle. They are a kind of phytoplankton called diatoms, a common one-celled organism. Their genetic material indicates the microbes are dormant, but could be revived, Orsi said.

"This was an unexpected discovery," Orsi said. "We've found diatoms and the nucleic acid preserved in sediments for millions of years."