The enormous earthen monument Poverty Point, built on a Mississippi River bayou some 3,200 years ago, is an impressive feat of engineering. Hunter-gatherers moved more than 26.5 million cubic feet (750,000 cubic meters) of dirt to create concentric ridges and several large mounds in what is today northern Louisiana.

Now researchers say one of the most impressive earthworks at the site likely took shape in fewer than 90 days, built by thousands of Native American laborers using a "bucket brigade" system.

Archaeologists excavating parts of Poverty Point, which is now in the running to become a UNESCO World Heritage Site, analyzed core samplings and sediments from one of the massive earthen features known as Mound A. Curiously, they found no traces of rainfall or erosion during the construction phase of the mound.

"We're talking about an area of northern Louisiana that now tends to receive a great deal of rainfall," said researcher T.R. Kidder, an anthropology professor at Washington University in St. Louis. "Even in a very dry year, it would seem very unlikely that this location could go more than 90 days without experiencing some significant level of rainfall. Yet, the soil in these mounds shows no sign of erosion taking place during the construction period. There is no evidence from the region of an epic drought at this time, either." [In Photos: Earthly Mounds Shaped Like Animals] 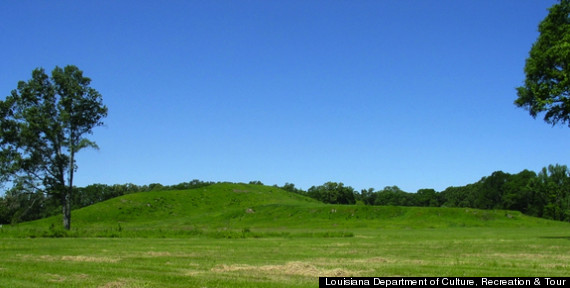 A bird-shaped mound at Poverty Point in Louisiana, nominated as a UNESCO World Heritage Site.

Mound A, which stretches across 538,000 square feet (50,000 square meters) at its base and rises 72 feet (22 m) above the Mississippi River, is thought to be the last addition to Poverty Point's altered landscape. If it were built today, it would take a 10-wheel dump truck more than 30,000 loads to move the estimated 8.4 million cubic feet (238,500 cubic m) of dirt that make up the mound, Kidder and his colleagues said. But hunter-gatherers likely did it with bushel baskets.

"The Poverty Point mounds were built by people who had no access to domesticated draft animals, no wheelbarrows, no sophisticated tools for moving earth," Kidder explained in a statement. "It's likely that these mounds were built using a simple 'bucket brigade' system, with thousands of people passing soil along from one to another using some form of crude container, such as a woven basket, a hide sack or a wooden platter."

The researchers believe to complete such a feat in such a short amount of time would have required about 3,000 laborers. This suggests that as many as 9,000 archaic Native Americans might have flocked to Poverty Point for the huge construction project, assuming that many of the workers were accompanied by their wives and children, the team said.

"Given that a band of 25-30 people is considered quite large for most hunter-gatherer communities, it's truly amazing that this ancient society could bring together a group of nearly 10,000 people, find some way to feed them and get this mound built in a matter of months," Kidder said.

"These results contradict the popular notion that pre-agricultural people were socially, politically, and economically simple and unable to organize themselves into large groups that could build elaborate architecture or engage in so-called complex social behavior."

Poverty Point was recently nominated to become a UNESCO World Heritage Site because of its cultural significance. Artifacts excavated at the site come from as far away as the Ohio and Tennessee river valleys and the Appalachians of Alabama and Georgia, indicating the Poverty Point civilization was heavily involved in trade, the Louisiana Office of Cultural Development's Division of Archaeology noted in its UNESCO application.

The new research was detailed online last month in the journal Geoarchaeology.