Residents of Sardis, an ancient city in modern-day Turkey, spent decades rebuilding after a devastating earthquake struck one night in the year A.D. 17. To ward off demons and future disasters, some locals may have sealed eggshells under their new floors as lucky charms, archaeologists found.

In the summer of 2013 archaeologists were excavating an ancient building at Sardis that was constructed after the earthquake. Underneath the floor, they found two curious containers that each held small bronze tools, an eggshell and a coin, resting just atop the remains of an earlier elite building that was destroyed during the disaster. 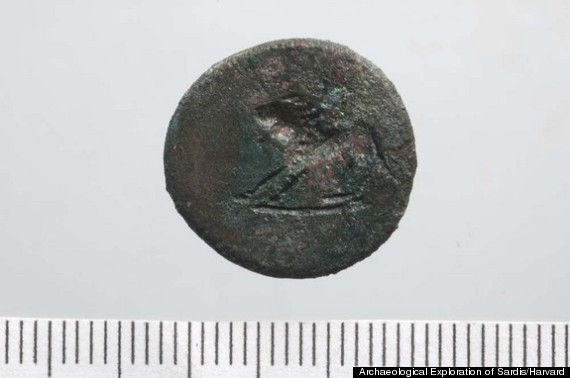 The graffiti lion incised on this coin is likely a symbol of the goddess Cybele, often associated with mountains.

The objects in the odd assemblages were important in ancient rituals to keep evil forces at bay, and the archaeologists who found them believe they could be rare examples of how the earthquake affected ancient people on a personal level. [See Images of the Ritual Offerings at Sardis]

One of the eggshells found under the floor at Sardis was amazingly still intact when excavators lifted the lid on the container last summer.

"That was really fantastic," Elizabeth Raubolt of the University of Missouri, Columbia told LiveScience "You can almost see where they chiseled a perfect circle and then let the contents aspirate."

Raubolt has worked on the excavations at Sardis (which are led by Nick Cahill of the University of Wisconsin-Madison) as a Roman pottery specialist for the past four field seasons. When she presented her findings this month at the Archaeological Institute of America's annual meeting in Chicago, she noted that several superstitions in the ancient world involved eggs.

The Roman historian Pliny wrote about how people would immediately break or pierce the shells of eggs with a spoon after eating them to ward off evil spells. Eggshells were also put inside "demon traps" buried in modern-day Iraq and Iran to lure and disarm malevolent forces, Raubolt explained. And sometimes, whole eggs were buried at someone's gate to put a curse on that person.

"You can imagine how nice it smelled after a while," Raubolt said.

With those precedents in mind, Raubolt thinks the eggshells at Sardis served as a way to protect the people in this building from evil forces, including future earthquakes, and maybe even curses cast by others. [Image Gallery: This Millennium's Destructive Earthquake]

Zeus Lydios and Cybele were the father and mother gods of the region, associated with storms and mountains — perhaps the right deities to pray to for those trying to prevent an earthquake. A numismatist, Jane Evans of Temple University dated those two coins to the reign of Roman Emperor Nero, who ruled from A.D. 54 to 68, showing that these offerings were laid in the ground at least a few decades after the disaster.

Nearly identical ritual deposits dating back to the early Imperial era were found around the Artemis Temple in Sardis during the early 20th-century excavations, Raubolt noted. And locals seem to have buried strange things under their floors long before the earthquake.

In one grisly example, archaeologists in the 1960s found 30 pots and jars dating back to the Lydian period, some 500 years earlier, each containing an iron knife and a puppy skeleton with butchering marks. It's not clear if those "puppy burials" are linked to the later egg entombments of the Roman era, but they at least attest to the long tradition of ritual practice in the region, Raubolt said.

It's been difficult for researchers to find direct evidence of the A.D. 17 earthquake. Archaeologists have found some large fills of earthquake debris that had been dumped to relevel the ground. They can see evidence of reconstruction on the Temple of Artemis. From literary sources and accounts of public rebuilding efforts, they know and that Imperial aid flowed into Sardis from Rome. To thank the emperors, the people of Sardis even renamed themselves the "Kaisareis Sardianoi" or "Sardians of the Caesars." But how the "average Joes of antiquity" reacted to the quake has been largely unknown, Raubolt told LiveScience.

"That's what makes this deposit so interesting," Raubolt said. "It's one person's way of coping with the uncertainties and tumultuous events of that period."

Further excavation work might help determine what kind of building was constructed on top of these offerings. The team finds a lot of glass beads on site, Raubolt noted, which suggests it may have been a store, but it's use is not yet clear.

People In Ancient Sardis May Have Used Eggs To Ward Off Demons, Disasters
Unearthed