An ancient sea animal that looked like a flower had its anus right next to its mouth, a new fossil study finds.

The research reveals that this odd marine creature was likely an ancestor of a group known as the entoprocta. Previously, the oldest fossil entoprocta came from the late Jurassic, about 145 million years ago. The new fossils date all the way back to the Cambrian, about 520 million years before the present.

That is near the so-called Cambrian Explosion, when most of the major lineages of animals appeared on the scene, as did complex ecosystems. Some odd animals emerged during this time, such as bizarre shrimplike monsters called anomalocaridids that could grow up to about 6 feet (1.8 meters) in length; a 515-million-year-old predator with compound eyes containing 3,000 lenses; and a 50-legged arthropod that skittered along the seafloor of what is now Canada. 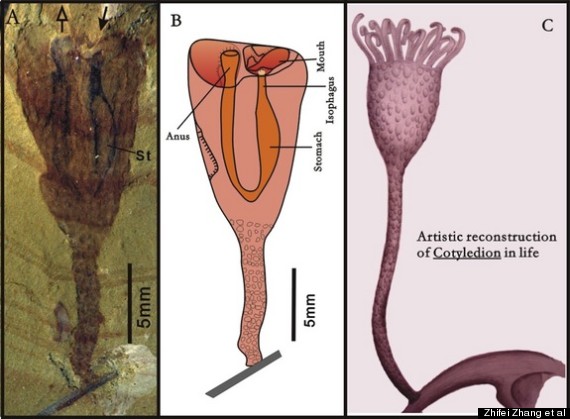 The Cambrian marine animal Cotyledion tylodes in fossil form and as illustrated by artists.


The newfound species, Cotyledion tylodes, has been analyzed before, but the discovery of hundreds of new specimens allowed researchers led by Zhifei Zhang of Northwest University in Xi'an, China, to take a more detailed look. The team analyzed 418 specimens from Yunnan, China. [The 10 Weirdest Animal Discoveries]

They found that C. tylodes lived a lifestyle fixed to one spot, filtering water through a ring of tentacles that surrounded its mouth — and its anus. The two openings sat right next to one another, connected by a U-shaped gut.

That gut proved that the previous classification of C. tylodes as a cnidarian, or jellyfishlike creature, was wrong, the researchers report today (Jan. 17) in the journal Scientific Reports.

Instead, the flowerlike filter feeder was likely an early entoproct, Zhang and colleagues found. The body pattern is almost identical, though the ancient version grew to a length of 0.3 inches to 2.2 inches (8 to 56 millimeters), while today's entoprocts are comparatively tiny at between 0.004 inches and 0.27 inches long (0.1 to 7 mm).

Another big difference between C. tylodes and modern entoprocts is on the outside. Unlike what is found in living entoprocts, the stem and flowerlike feeding cup of the ancient creature were covered by tiny hardened protuberances called sclerites, which may have formed a sort of hard exoskeleton for the creatures.