More than 2,000 years ago, at a time when Egypt was ruled by a dynasty of kings of Greek descent, someone, perhaps a group of people, hid away some of the most valuable possessions they had — their shoes.

Seven shoes were deposited in a jar in an Egyptian temple in Luxor, three pairs and a single one. Two pairs were originally worn by children and were only about 7 inches (18 centimeters) long. Using palm fiber string, the child shoes were tied together within the single shoe (it was larger and meant for an adult) and put in the jar. Another pair of shoes, more than 9 inches (24 cm) long that had been worn by a limping adult, was also inserted in the jar. 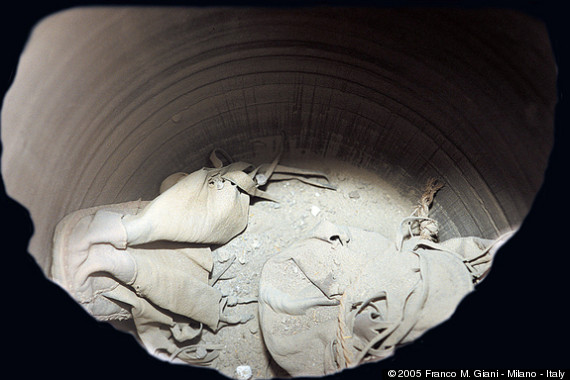 Archaeologists discovered seven shoes, that appear to be made out of bovine, within a jar in an Egyptian temple. The shoes date back more than 2,000 years and this picture shows the inside of the jar before the shoes were removed.

The shoe-filled jar, along with two other jars, had been "deliberately placed in a small space between two mudbrick walls," writes archaeologist Angelo Sesana in a report published in the journal Memnonia.

Whoever deposited the shoes never returned to collect them, and they were forgotten, until now. [See Photos of the Ancient Egyptian Shoes]

In 2004, an Italian archaeological expedition team, led by Sesana, rediscovered the shoes. The archaeologists gave André Veldmeijer, an expert in ancient Egyptian footwear, access to photographs that show the finds.

"The find is extraordinary as the shoes were in pristine condition and still supple upon discovery," writes Veldmeijer in the most recent edition of the Journal of the American Research Center in Egypt. Unfortunately after being unearthed the shoes became brittle and "extremely fragile," he added.

Veldmeijer's analysis suggests the shoes may have been foreign-made and were "relatively expensive." Sandals were the more common footwear in Egypt and that the style and quality of these seven shoes was such that "everybody would look at you," and "it would give you much more status because you had these expensive pair of shoes," said Veldmeijer, assistant director for Egyptology of the Netherlands-Flemish Institute in Cairo.

The date of the shoes is based on the jar they were found in and the other two jars, as well as the stratigraphy, or layering of sediments, of the area. It may be possible in the future to carbon date the shoes to confirm their age.

Why they were left in the temple in antiquity and not retrieved is a mystery. "There's no reason to store them without having the intention of getting them back at some point," Veldmeijer said in an interview with LiveScience, adding that there could have been some kind of unrest that forced the owners of the shoes to deposit them and flee hastily. The temple itself predates the shoes by more than 1,000 years and was originally built for pharaoh Amenhotep II (1424-1398 B.C.).

Veldmeijer made a number of shoe design discoveries. He found that the people who wore the seven shoes would have tied them using what researchers call "tailed toggles." Leather strips at the top of the shoes would form knots that would be passed through openings to close the shoes. After they were closed a long strip of leather would have hung down, decoratively, at either side. The shoes are made out of leather, which is likely bovine.

Most surprising was that the isolated shoe had what shoemakers call a "rand," a device that until now was thought to have been first used in medieval Europe. A rand is a folded leather strip that would go between the sole of the shoe and the upper part, reinforcing the stitching as the "the upper is very prone to tear apart at the stitch holes," he explained. The device would've been useful in muddy weather when shoes are under pressure, as it makes the seam much more resistant to water.

In the dry (and generally not muddy) climate of ancient Egypt, he said that it's a surprising innovation and seems to indicate the seven shoes were constructed somewhere abroad.

The shoes also provided insight into the health of the people wearing them. In the case of the isolated shoe, he found a "semi-circular protruding area" that could be a sign of a condition called Hallux Valgus, more popularly known as a bunion. [The 9 Most Bizarre Medical Conditions]

"In this condition, the big toe starts to deviate inward towards the other toes," Veldmeijer writes in the journal article. "Although hereditary, it can also develop as a result of close fitting shoes, although other scholars dispute this ...."

Another curious find came from the pair of adult shoes. He found that the left shoe had more patches and evidence of repair than the shoe on the right. "The shoe was exposed to unequal pressure," he said, showing that the person who wore it "walked with a limp, otherwise the wear would have been far more equal."

Still, despite their medical problems, and the wear and tear on the shoes, the people who wore them were careful to keep up with repairs, Veldmeijer said. They did not throw them away like modern-day Westerners tend to do with old running shoes.

"These shoes were highly prized commodities."

Veldmeijer hopes to have the opportunity to examine the shoes, now under the care of the Ministry of State for Antiquities, firsthand.