Since it was launched in 2009, NASA's planet-hunting Kepler Space Telescope has identified more than 1,000 exoplanets and almost 4,200 exoplanet "candidates." It's even found entire solar systems--but never one like the system it just identified some 117 light-years from Earth.

Astronomers say the Kepler-444 system may help scientists pinpoint when Earth-like planets first started forming, and may have important implications for the possibility of alien life.

"There are far-reaching implications for this discovery," Dr. Tiago Campante, a research fellow at the University of Birmingham and one of the astronomers who helped discover the new system, said in a written statement. "We now know that Earth-sized planets have formed throughout most of the Universe's 13.8-billion-year history, which could provide scope for the existence of ancient life in the Galaxy." 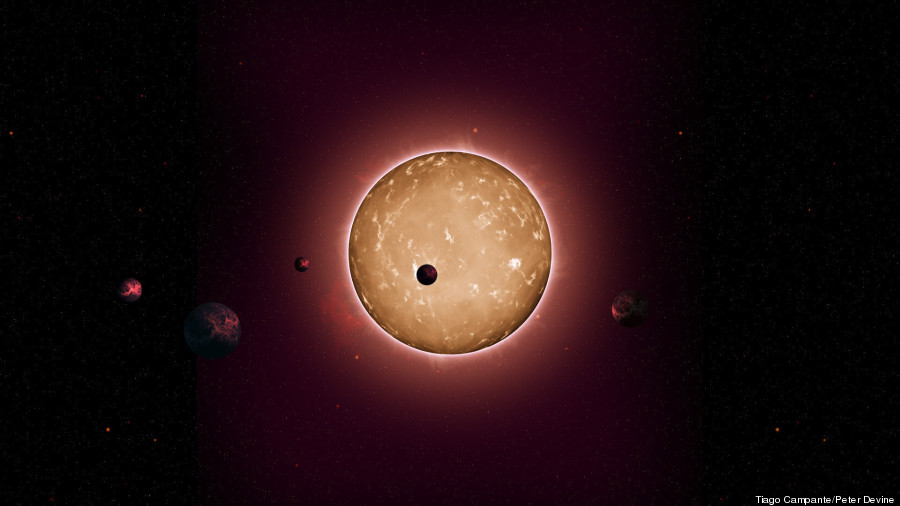 Artist's conception of Kepler-444, which hosts five Earth-sized planets in compact orbits. The planets were detected from the dimming that occurs when they transit in front of their parent star, as shown here.

Campante and his colleagues detected the ancient star system system by looking at data collected by Kepler over a four-year period. They used a technique called asteroseismology, in which small changes in a star's brightness indicate its mass, age, and diameter. They detected the five planets using what's called transit photometry, which involves observing a star dim slightly when planets cross its face (see an animation here).

The five planets are in tight orbits around Kepler-444, which means they're too close to fall within the so-called "Goldilocks zone," the region of space around a star that is warm enough but not too warm for a planet to have liquid water and, possibly, life.

Though Kepler-444 can't support life, Campante says it's possible there are other ancient solar systems out there that might.

"Other similarly old planets could indeed harbor life," he said in an email to The Huffington Post. "Think about a technologically advanced civilization that has a few billion years head start relative to us!"

Other scientists, who were not involved in the new research, have their doubts.

"It is not clear that planets much older than the Earth have a higher expectation of having life than the more recently formed planets," William Borucki, a space scientist at the NASA's Ames Research Center in Moffett Field, Calif told HuffPost in an email. "The discovery of Kepler-444 is important, but whether it implies advanced life or no life will remain a mystery until our technology advances to the point that we can get a definitive answer."

Regardless of whether the discovery makes alien life more or less likely, Dr. Seth Shostak, senior astronomer and director of the Center for SETI Research in Mountain View, Calif., hopes the discovery will help E.T. hunters home in on where to look.

"The implication of this is that worlds of all ages are out there, and the average planet is going to be billions of years older than our own," he told HuffPost in an email. "Complex, thinking beings required 4 billion years of evolution on Earth. If clever creatures always take a long time to appear, then older planets might be preferred hunting grounds for signals that could tell us someone’s out there.”

A paper describing the discovery has been accepted for publication in the Astrophysical Journal.

Check out the podcast below for an interview with William Borucki, and learn more about the amazing story behind NASA's planet-hunting Kepler mission.

CORRECTION: A previous version of this article misstated the age of Kepler-444, referring to years in millions instead of billions.