If you've always wondered what a 100-million-year-old spider attack might look like, today is your lucky day.

According to a newly published paper, researchers at Oregon State University have found the "only fossil ever discovered of a spider attack on prey caught in its web." The amber-encased spider is poised to devour a tiny parasitic wasp. 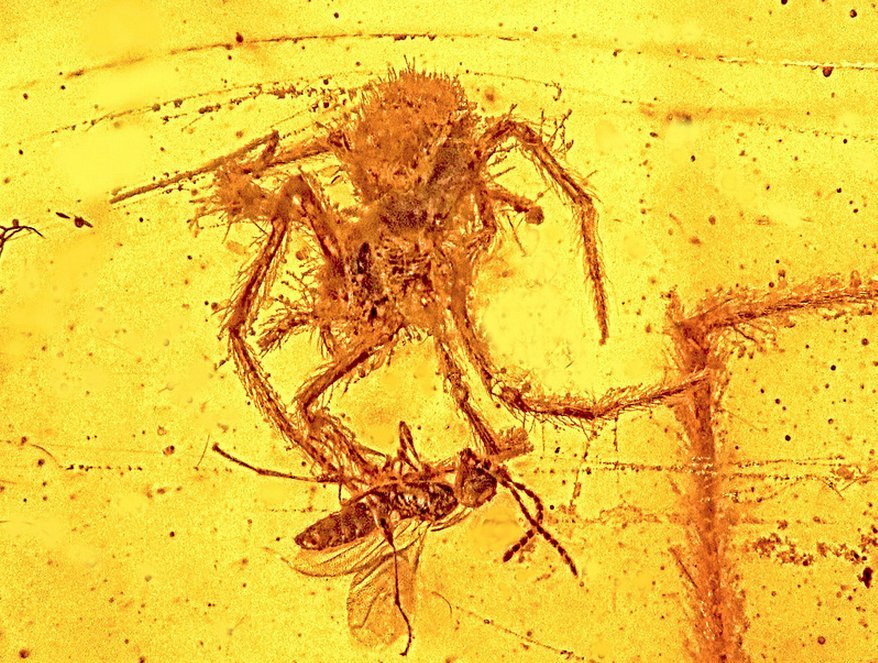 “This was a male wasp that suddenly found itself trapped in a spider web,” George Poinar Jr., a professor emeritus of zoology at the university, said in a written statement. “This was the wasp’s worst nightmare, and it never ended. The wasp was watching the spider just as it was about to be attacked, when tree resin flowed over and captured both of them.”

Researchers say both the spider and the wasp belong to extinct genera. They added that the "extraordinarily rare" find may provide invaluable insight into the behavior of ancient spiders.

The...fossils are in a piece of amber that preserved this event in remarkable detail, an action that took place in the Hukawng Valley of Myanmar in the Early Cretaceous between 97-110 million years ago, almost certainly with dinosaurs wandering nearby.

Aside from showing the first and only fossil evidence of a spider attacking prey in its web, the piece of amber also contains the body of a male spider in the same web. This provides the oldest evidence of social behavior in spiders, which still exists in some species but is fairly rare. Most spiders have solitary, often cannibalistic lives, and males will not hesitate to attack immature species in the same web.

Poinar and Ron Buckley, an amber collector from Kentucky, have described the find in a paper published in the most recent issue of the journal Historical Biology. They wrote that while there are other examples of amber-trapped insects caught in spider webs, "this is the first fossil evidence of spider sociality and a fossil spider attacking prey trapped in its web."

This is not the first time in recent weeks that remarkable creepy crawlies have been found fossilized in amber.

In August, the Associated Press reported that scientists found three well-preserved, amber-encased ancient insects in Italy. The insects were said to be about 230 million years old -- about "100 million years older than what had been the previously known oldest critters trapped in fossilized tree resin."

While older insects have been found in rock fossils, these are different because they are not compressed and better preserved, said study lead author David Grimaldi, curator of the American Museum of Natural History in New York. And you can see more detail, he said.

"That's the great thing about amber. You can make this incredible detailed comparison with living species." Grimaldi said.