To the non-phytomaniac, the word "baobab" might as well refer to a rare breed of primates or a minuscule kind of bacteria living on the edges of eyelashes. But, for those well versed in the world of ancient trees, the term rather distinctly points to a special genus of plant life indigenous to Madagascar, mainland Africa, the Arabian Peninsula and Australia. Also called "the tree of life," baobab is the common name for Adansonia, a group of six species of trees; wild growths of trunk and foliage that all at once resemble bottle caps, umbrellas and alien life forces. 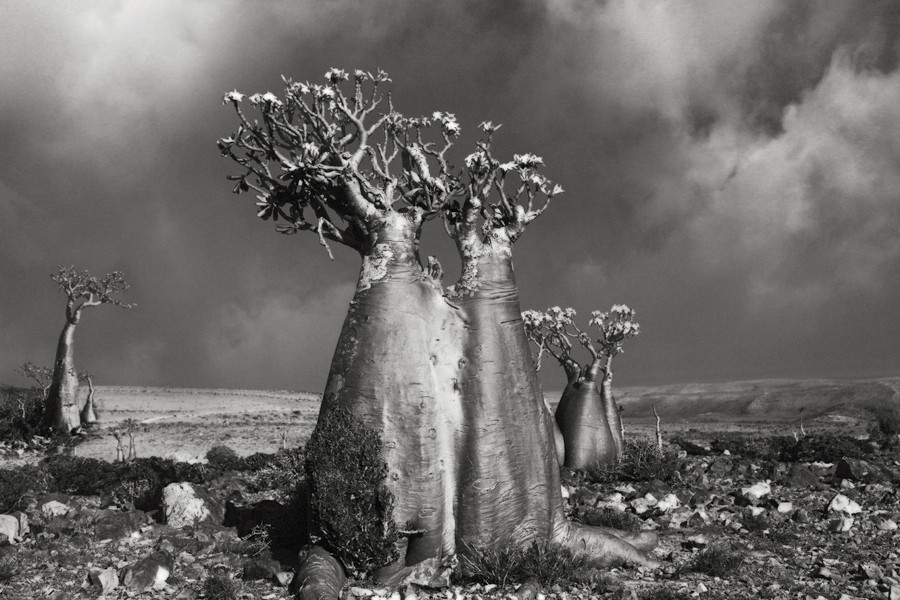 Beth Moon has positioned herself as a sort of documentarian of baobabs. In a book titled Ancient Trees: Portraits of Time, the photographer reveals heart-stopping images of bulging plants reaching to the heavens and the horizon. Although she photographs other types of ancient trees, like sequoias and yews, her framed baobabs -- trees that can live for thousands of years -- stand out.

Moon uses three criteria in choosing her photographic subjects: age, size and history. Using history books and botany references, tree registers and newspaper articles, she tracks down tree survivors located on mountainsides, private estates and protected lands. Some species exist only in a few areas around the world, and the baobab is one of them, as it's an ancient and endangered fixture found mostly in Madagascar.

Moon's photographs look old themselves. She uses platinum and palladium printing, a vintage photographic process that she hopes speaks "about survival, not only of man and nature’s, but to photography’s survival as well." For each print, she mixes ground platinum and palladium metals with iron oxide, creating a solution that is hand-coated onto paper and exposed to light. The metals become part of the paper, and the prints can feasibly last for centuries as a result. The entire method, for Moon, echoes her deep connection to the trees she photographs.

"Standing as the earth’s largest and oldest living monuments, I believe these symbolic trees will take on a greater significance, especially at a time when our focus is directed at finding better ways to live with the environment, celebrating the wonders of nature that have survived throughout the centuries," she writes in her artist statement. "By feeling a larger sense of time, developing a relationship with the natural world, we carry that awareness with us as it becomes a part of who we are. I cannot imagine a better way to commemorate the lives of the world’s most dramatic trees, many which are in danger of destruction, than by exhibiting their portraits."

See a preview of Ancient Trees below.

All photographs courtesy of Beth Moon.