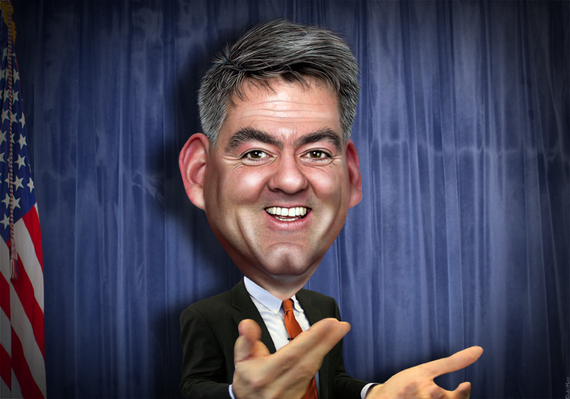 Many pols flip-flop. But each year, one politician rises above the din to become a new icon of embarrassing flip-floppery.

This year, America's flip-flopper-in-chief is Colorado Senate hopeful Cory Gardner -- Republican candidate in what FiveThirtyEight lists as the closest Senate race in America.

Flip-flopping, in politics, is not simply changing one's mind. It's trying to have it both ways. Some politicos flip-flop because they have no real beliefs other than their own self-advancement; others flip-flop because their real views are so extreme that, to be politically viable, they need to be covered up.

Which kind is Gardner? We'll investigate that later. But first, let's consider his astonishing flip-flops themselves. Among his many remarkable achievements in the competitive field of flip-floppification, three stand out: his acrobatic, even balletic policy reversals and evasions on climate change, immigration reform, and birth control.

At last night's Colorado Senate debate, the audience probably hadn't expected to laugh so hard. But Gardner's lurching attempts to avoid a straight answer on climate change drew gale-force guffaws. In the lightning round of the debate, in which candidates were instructed to give only "yes" or "no" answers, Gardner was asked a simple question: "Do you believe humans are contributing significantly to climate change?"

His response: "Well, I've said all along that climate is an important issue, and I don't think you can say yes or no."

The laughter began. Gardner tried again: "I believe the climate is changing. I disagree to the extent that's been on the news about it."

A moderator reprimanded him for breaking the rules. Gardner responded that a "yes" or "no" answer would "short-change" this "important issue." This time, when the audience burst out laughing, even Gardner started chuckling. (For the record, his opponent Mark Udall's answer to the same question -- in line with at least 97 percent of climate scientists -- was a short and sweet "yes.")

Within that debate itself, of course, Gardner wasn't flip-flopping -- he was dodging. But just two days earlier, in Colorado's first Senate debate, Gardner answered the question "Are humans causing climate change?" with a crystal-clear "Well, there is no doubt that pollution contributes to the climate changing around us."

Even though Gardner quickly segued from his acknowledgment of scientific reality to an attack on attempts to do anything about it, his answer made headlines. That's because, just this January, he had voted against accepting the reality of climate science, a position he hadn't renounced until that moment. All told, Gardner's position went from denial to acceptance to evasion in the course of a week.

Reach further into history, though, and you can find a fourth position -- similar to his final one this week. Apparently, in 2010 as in 2014, Gardner thought the media was exaggerating the problem. During his 2010 House campaign, Gardner said, "I think the climate is changing, but I don't believe humans are causing that change to the extent that's been in the news."

The problem for Gardner is that, during the four years after that statement, Coloradans endured a massive barrage of droughts, fires, and floods -- not just on the news but in their own backyards. Gardner doesn't want to alienate reasonable people by pretending that nothing's happening. But he also doesn't want to alienate his base of climate-denying, carbon-spewing super-donors. The result: industrial-strength flip-flopping.

One in 10 registered voters in Colorado is Latino. Presumably, Gardner had these voters in mind when he told NPR's Kirk Siegler that he'll "continue to fight for immigration reform" if he's elected to the Senate.

He wouldn't be a typical Republican, he promised; he'd be "unafraid to buck the party" if it was wrong on the issue. And it wasn't merely talk: Gardner just voted against the Republican initiative to defund the Deferred Action on Childhood Arrivals (DACA) program, which prevents the deportation of DREAMers, the millions of undocumented immigrants who arrived in the U.S. as children.

The problem with Gardner's apparently commendable moderation on immigration issues is that it's a ruse.

You don't have to look very far into the past to find Gardner on the exact opposite side of the issue: He voted to defund DACA only this February. And when he's bucked his own party, it's been on the anti-immigrant side, opposing even the watered-down immigration reform ideas offered by Speaker John Boehner.

Even as Gardner spent years in the House racking up a consistently (until just now) anti-immigrant voting record, he's mouthed platitudes about reform and a "humane" approach. That's what made Gardner the poster boy for a 2013 article titled "On immigration, GOP swing votes want it both ways." Apparently, he also wants Colorado's Latinos to develop a case of collective amnesia.

For all of his malarkey on climate change and immigration, no issue better showcases Gardner's capacity for Olympic-caliber flip-flopping than the question of birth control.

If his campaign is any indication, Gardner wants Coloradans to believe he is a fearless family planning superhero, a fighter who will stop at nothing to break down barriers between women and their birth control pills. Just look at his television ad: "I believe the pill ought to be available over the counter, 'round the clock, without a prescription, cheaper and easier for you. ... My plan means more rights, more freedom and more control for you...."

Well, that's his position as of this June. Even on its face, it has some problems. Take his promise to make birth control "cheaper." Under the Affordable Care Act, health insurers are already required to cover birth control at zero cost to consumers. But if Congress were to sidestep the FDA and make birth control pills available over the counter, they'd cost about $600 a year. Which is a lot more than $0.

Gardner's response is that he also wants to amend the Affordable Care Act to cover over-the-counter medicine, so that birth control under his plan could be as free to consumers as it is now. Not that he's ever introduced a bill to this effect. Or explained how he'd pay for it. Or explained how an amendment to, in essence, expand the ACA could ever pass the House, where Gardner himself voted dozens of times to repeal it entirely.

As Gardner posted on Facebook a year ago, "I have voted to repeal Obamacare in its entirety, dismantle it, and to defund it in the nearly 40 pieces of legislation that have come before the House."

So Gardner opposed the law that gave women access to no-cost birth control in the first place, and his new proposal to make it "cheaper" would most likely make it far more expensive.

But even that is a mere fleck of a flip-flop compared to Gardner's crowning contradiction on contraception.

The fundamental issue is that the GOP's would-be warrior against the War on Women is also one of the most dedicated soldiers on the other side. In 2008 and again in 2010, Gardner backed "personhood" amendments to the Colorado state constitution -- measures that would grant full human rights to embryos, starting from the moment that sperm fertilizes a human egg. Experts say that personhood laws would ban not only abortion but IUDs, injectable birth control, and, yes, birth control pills.

Needless to say, a ban on birth control pills would make them hard to access over the counter.

Gardner isn't blind to this dilemma. In fact, he's gone as far as flipping over to the anti-personhood side in the debate over this year's Colorado personhood amendment.

But there's a complication there, too. Gardner hasn't just supported birth-control-banning personhood measures in his home state. As NARAL and MoveOn.org pointed out in a TV ad, Gardner also co-sponsored a personhood bill in Congress, one that would cover the entire country. And that bill? Well, he's still co-sponsoring it today.

So that's three positions (in four phases) on climate science, total self-contradiction on immigration, and a tornado-like series of 360-degree turns on birth control.

Sometimes, of course, something that looks like a flip-flop isn't actually a flip-flop -- see, for example, the painful true story of John Kerry's 2004 "I voted for it before I voted against it" line. But Gardner's record makes clear that he's not suffering from poorly chosen words. He knows exactly what he's doing.

So why does he do it? Is he an opportunist with no core beliefs, or an extremist trying to paper over his real agenda?

Either is possible. When Gardner represented a deep-red House seat, he was a conservative extremist. Now that he's running for Senate in a bluish-purple state, he wants to be seen as a moderate. So maybe, in his heart, he doesn't care about left or right -- he just wants to move up, grabbing the next rung on the ladder to power.

But his life tells a different story. Just 40 years old, Gardner has been a Republican operative since his days as a college intern in the state capitol. Throughout his career, his political persona has been consistent: far-far-right positions paired with rhetoric and a demeanor that makes him seem moderate. In the hyper-conservative House, he was ranked the 10th most right-wing, far to the right of, say, Michele Bachmann. But thanks to strategic flip-flopping, he's been able to bridge the corporate and hyper-ideological wings of the Republican Party, simultaneously raking in campaign contributions and steeping in a tea party teapot.

In other words, his chosen path to power has never been a centrist one, this year's election-year left feint notwithstanding. Unless it's all been an act -- and that's a long act to sustain -- he's a hardcore conservative through and through.

Ultimately, Gardner's hyperkinetic flip-flopping is about more than Gardner himself. It's a symptom of an underlying condition: the kind of deception now necessary for Republicans to get elected in non-ultra-red states.

One of the discomforting phenomena of this campaign season is that pollsters routinely find that when they describe the actual, on-the-record policy views of Republicans to focus groups, the participants refuse to believe them. They just seem too absurdly extreme. Banning birth control pills, for example, is a position that most voters think disappeared a generation ago. In a sense, the GOP's hopes for a Senate takeover this year are premised on the idea that their candidates' positions are literally unbelievable -- as in, they won't be believed, so the huge majority of voters who oppose those positions won't realize the urgency of turning out to vote. But as the electorate starts paying attention, the danger grows that their agenda will actually be understood. That makes for tough going.

And when the going gets tough, the flip-floppers get flip-flopping.