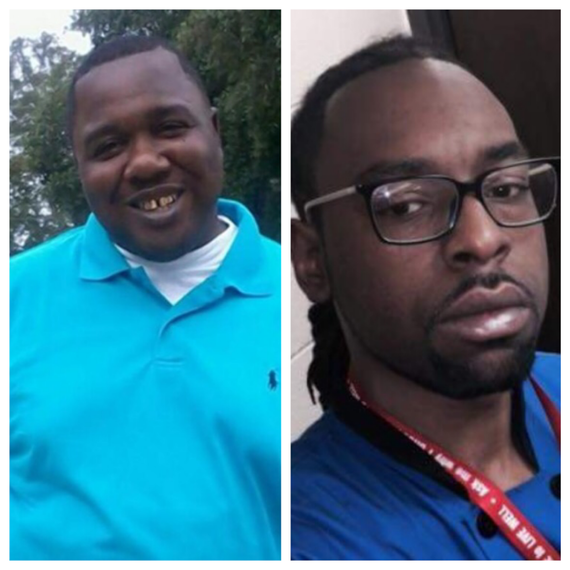 A few days ago I was having a conversation with my sister and I asked her if police had chilled out on killing innocent black people or were they just hiding it better? It seemed like more time had gone by since the last video of an innocent black person being murdered by a police officer, so I wasn't quite sure. Hours later, I realized that I had spoken too soon.

Right before going to sleep on Tuesday night, I made the mistake of looking at my Facebook timeline just one last time. That's when I learned of the fatal shooting of Alton Sterling. A black man, who was selling cds outside of a convenience store who was approached, tased, tackled then murdered by two police officers while laying on his back. The video is just as horrifying as it sounds. I told myself not to watch it, but I did. To me, it was reminiscent of the murder of Oscar Grant, a young, innocent, black father who was riding the BART on New Year's Day when he was approached by police officers because of an argument on the train. He was held down, shot in his back THEN handcuffed. Do you hear me? He was shot in his BACK THEN he was handcuffed, as if he was still a threat. Maybe it was because neither of them were fighting yet both were held down. Maybe it was because neither of them posed a threat. I'm not sure, but it was haunting. Then to hear the trauma that the individuals who filmed this murder experienced...I was done for the night.

I woke up to a video of Alton Sterling's 15 year old son weeping for his daddy in front of the world. I became undone. Having experienced the death of loved ones before, I understand loss, but I don't understand loss like this. His mother, so full of strength, fought back tears as she read the statement from the family. I closed my computer, laid down and wept. Unfortunately, I am only able to do that for a short period of time because it feels like a luxury to be able to log off and click the "X" at the top of the screen. I'm working on it though.

There is a mental health aspect that we deal with when it comes to these murders. Internet trolls come out of hiding to seemingly mock your pain; to tell you that your reality isn't your reality. Then there are the people who brazenly declare that "All Lives Matter" after you've stated that "Black Lives Matter". Constantly explaining that "Black Lives Matter" doesn't mean that ONLY black lives matter, which is obvious to everyone, but it's an opportunity for these trolls to position themselves above people who scream "BLACK LIVES MATTER". Understand that we're screaming because we are not being heard. It's too much sometimes so you have to mentally protect yourself. Feeling strong enough to face additional news about Alton Sterling's murder, I logged back onto social media. I vigorously started sharing any information about this case as I could. The police officer's names, articles from other journalists who I admire, then a second video emerged from a different angle. "Don't watch it, Summer. Don't watch it...You already know the outcome." That lasted about 4 minutes before I saw Alton Sterling succumb to his injuries.

A week ago, Jesse Williams gave the most powerful acceptance speech I've ever had the pleasure of witnessing. He received the Humanitarian Award at the 2016 BET Awards. Being that I know about his activism and work outside of "Grey's Anatomy", I couldn't wait to hear what he had to say. I love unapologetic black people and Jesse Williams is just that: unapologetically black. The words dripped off his tongue like a salve on my wounded heart. I could pinpoint examples throughout his entire speech; the artists who appropriate black culture who never speak out against the injustices that black people face, the pain watching the video of Tamir's murder, watching the video of Sandra Bland knowing the outcome. It's exhausting being aware of the injustices that we face daily and sometimes you just need someone to say, "I hear you and I'm with you." He said what I have been feeling. "The burden of the brutalized is not to comfort the bystander", he said. I clapped and yelled and cried. There is always this fear that I'm too militant or that I'm being too strong with my opinions and feelings. I ignore that fear but I'm reminded too often that my activism might not be good for business. Let me get this straight, at the end of the day, I'm going to be proud that I never spoke out against the injustices that black people face because I'm a wedding planner? Nope. No thanks. I'd rather stand for something than fall for anything.

After an entire day of news coverage about Alton Sterling, I decided to try to get some sleep, although my mind was racing, I decided to check my Facebook timeline just one last time and saw the video of the murder of Philando Castile. And another one...here I am again, done for the night.