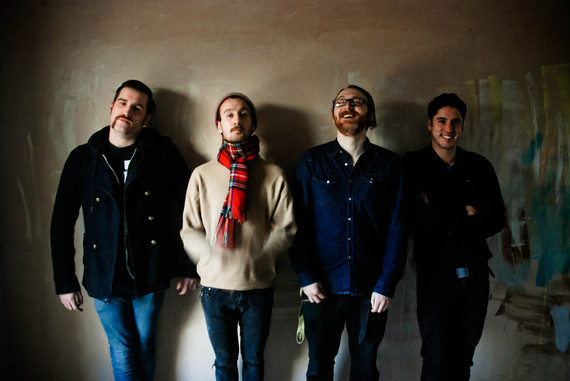 A few days ago, I finally caught up with Rory Friers from the band And So I Watch You From Afar. The band is from Northern Ireland, so I have been watching them from afar. He was able to answer a few questions despite the time difference. ASIWYFA, as they are often called, has a new album, Heirs, and a new tour this year. Currently, they are my favorite instrumental band of all time. If you give their new album a chance, they might be your favorite instrumental band of all time also. Keep reading to find out if you'll become a fire-breathing dragon. I'm just saying, anything is possible.

1. What was your inspiration for the new album?

It pretty much just came down to just wanting to make better music. The idea of making new songs or an album is an inspiration in its self really. Each time we get to put something new into the world its exciting, it's a chance to say something louder than we would ever have had the chance to if not for the band.

What an album represents for us is so much more than a piece of vinyl or a CD, it's a reason to see the world all over again. It gives us purpose for the next 18 months. The feeling that a song you're writing in a little rehearsal room in Belfast will be, in a year's time, possibly a meaningful addition to someone else's life is a cool notion for me. It's amazing.

It was also Niall's first record with us. So having him to bounce off and write with was so, so good. He made me make better songs and he brought loads of ideas to the table as well. We would spend hours talking about how we might construct an album when we were on tour, so by the time we got back to Belfast the whole band was almost vibrating with motivation to start crafting songs into something that spoke of where we were at that moment. We ended up with something I'm really proud of.

2. How would you describe your audience?

3. Is there a reason that you don't have lyrics or very many vocals?

When we first started we had no PA or microphone so when we were writing we didn't straight away start throwing lyrics or words over our ideas, and maybe we ended up compensating by making our songs a little more interesting. On the other hand, we also really loved a lot of instrumental bands too. We all liked Mogwai and Explosions in the Sky. I was really into bands like Hella and Rumah Sakit and Sleeping People. Being a band in the rural north coast of Ireland, we were excited to be doing something which was very different from what everyone else was doing. We tried to continue that as a motivation to always keep making music that feels exciting and like we're doing something we haven't done before.

4. Is there anything that you haven't accomplished yet that keeps you awake at night?

I guess I have a lot of ambitions, as soon as one thing is ticked of another 10 suddenly pop into my mind, but one that keeps getting away is the ever-elusive Japanese tour. For whatever reason its keeps nearly happening and then not, we've been so close to going a few times but fate seems to have conspired against us, which is so frustrating as its one of the places I would most want to spend time in the world, so I often think about that. But maybe soon, fingers crossed.

5. Are there any causes/organizations that you support?

We all individually support and get behind a lot of stuff that's affected us. We, as a band, try and make a stand for the things we believe in, especially here in Belfast, from the anti-racist marches and shows we're involved in, to the peace rallies at city hall and most recently the Gay Rights issues. An issue happening at the minute is a disgusting bill trying to be introduced called a 'conscience clause,' which would effectively void some equality laws. It would allow religious people to discriminate against people, whose identities clash with their religion. There's still a lot of politics and tension and small mindedness from some folks in our country. There's a lot of stuff, which is a long way from being perfect, but there are a lot of amazing people who are behind trying to get it there.

6. What is the worst thing about touring? What's the best thing?

Probably, quite predictably, the worst thing is missing people, family, friends, girlfriends, wives and now thanks to Johnny, a beautiful child. So that's always a bit sore on the heart when you have those moments of needing those people around you and they're on the other side of the world. But then there's this whole other family around us on tour that can read and support that. Other than getting to play our music at the end of every day that might be the best part, that real sense of togetherness, and quest with these people your so close with, it's an adventure.

7. The band has been together for 10 years and only one lineup change. What's the key to staying together for so long?

I think we have really learned from many mistakes, and ups and downs, the things that contribute to the good times and the things that contribute to the bad. So each year and each record and each tour we've sort of upgraded our operating systems in a way and just gotten better at seeing things for what they are and appreciating what we have together. Don't get me wrong we will sometimes want to kill each other but it's all pretty momentary.

8. Do you feel as if performing a show now is different than it was 10 years ago?

Yes and no, we actually watched some old stuff recently and it's hard not to cringe a bit at how we were, so much passion and not quite sure where we wanted to direct it all, everyone in their own little worlds. But as the passion and energy has grown we are now more assured of what to do with it, we've, over the past four records, made it to a sort of point of understanding about what it is that we want to do, what we want to play and what we want a live show to feel like, and that's a cool place to be, there's a bit less panic and a bit more cohesion and unity.

9. Who is the marathon runner in the group?

That would be me actually! How did you know that? Yeah, I started in late 2013, I always had this weird obsession with always privately setting myself little challenges and endurances all my life. I would always time how long I could hold my breath in school, or how quickly I could make breakfast, or how many months I could not drink alcohol. I don't know why, its maybe a way of me feeling like I'm in some sort of control.

But yeah, one day I just thought I'd love to be able to run a few miles and not be destroyed afterwards, so I sort of secretly started going out at night in my weird mis-matched get up and would time my runs. From there I just started getting into it way more and entering races and mountain runs and stuff. I love it that all I need is my shoes and I can go into my own little world for an hour or two, plus it's my favorite way to listen to new music.

10. For the parents in the group, has becoming a parent changed anything about how you view being in a band or songwriting?

I guess Johnny would be the man to ask about that as he's just become the first Daddy in the band. From talking with him, I suppose the main thing is just the unknown of how it will all co- exist. We're still to go out and tour, so I suppose that will be the big test. I guess if it had of happened a few years ago it would be hard to make it all work, especially when the band was so in debt financially and we had a crazy schedule. Luckily things have become cool and we are in a good stable place so we can keep everyone is happy and tailor things to make sure of that.