They're considered the "Oscars" for best public policies, and they come at a time when many people -- at least here in the U.S. -- are cynical about whether government can do anything right. The rollout of Obamacare is a mess and it comes on the heels of a paralyzing government shutdown. Still, it's not all gloom and doom for policymakers. That was apparent at the United Nations where they handed out the 2013 Future Policy Awards last Wednesday, on the eve of UN Disarmament Week. 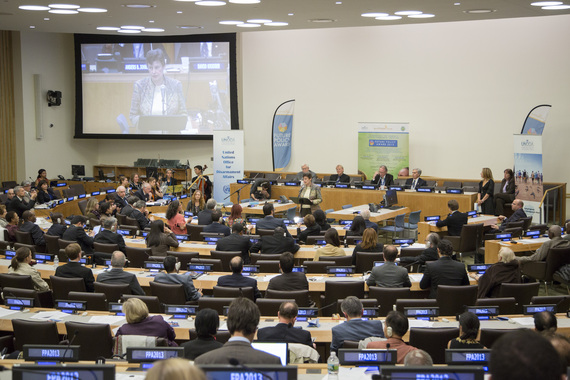 These awards don't honor individual achievement but instead government policies that tackle and solve the most pressing global challenges affecting future generations, such as climate change, energy consumption, food security and nuclear proliferation. For example, when it comes to food security, about 1 billion people a day struggle for access to adequate supplies of food. In 2009 the Future Policy Award was given to the Brazilian city of Belo Horizonte for its innovative food security program, one that led to a dramatic 60 percent decline in child mortality and a 75 percent drop in malnutrition over the course of a decade. An added bonus: The policy costs only 2 percent of the city's budget. Plans are now underway to replicate the program in Africa.

The Future Policy Award is the brainchild of Jacob von Uexkull, a former European Parliament member and journalist who was frustrated that good government policies were not getting the kind of recognition and attention they deserved, and because of that were not being replicated in other parts of the world where they could also do good. "Policy research which is being done in the world today is quite academic," von Uexkull says, "and it doesn't really connect with the needs of policy makers. They need much more support in actually implementing good policies."

Mr. von Uexkull says politicians are often at the mercy of lobbyists and government bureaucrats who " tell them why things can't be done."

"The best way to counter that, to explain that something can be done, is to explain that that policy already exists, has been implemented, and is functioning in a different country, " he adds.

The World Future Council consists of a group of 50 prominent individuals drawn from science, business, politics, the arts, and civil society. Each year they decide which of the world's critical problems they will focus upon and then zero in on the most effective policies addressing that particular issue. This year, with Iran's nuclear ambitions a daily drumbeat in the news, and the continuing war in Syria, the group chose to examine military and civilian disarmament policies that are working internationally. 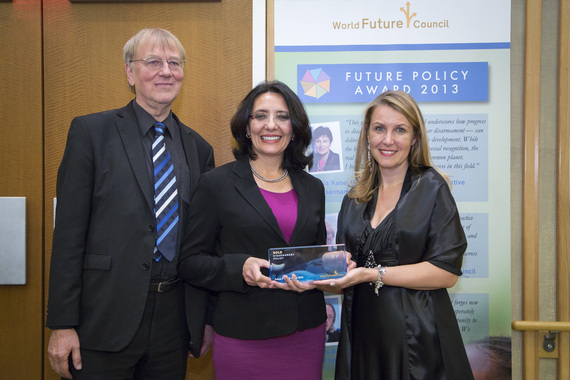 Gioconda Úbeda Rivera (center) receives the 2013 Future Policy Award. She is the former Secretary-General of the Agency for the Prohibition of Nuclear Weapons in Latin America and the Caribbean (OPANAL) and Deputy Minister of Foreign Affairs of Costa Rica. Ms. Rivera is flanked by Jacob von Uexkull, Founder of the World Future Council and Alexandra Wandel, Director of the World Future Council.

Twenty-five policies from 15 different countries were evaluated. The Gold Award, or top prize, went to a policy that ensures the peace and security in Latin America and the Caribbean through the military denuclearization of the region: the Treaty of Tlateloco. The outstanding success of this treaty, which has been ratified by all 33 countries in the region, including Cuba, is one the world needs to hear about, says David Krieger who sits on the World Future Council and is president of the Nuclear Age Peace Foundation.

"I think in the U.S. we are very under informed and misinformed about the danger of our policies. Giving the award for policies that work elsewhere is something the U.S. could learn from," Krieger adds. 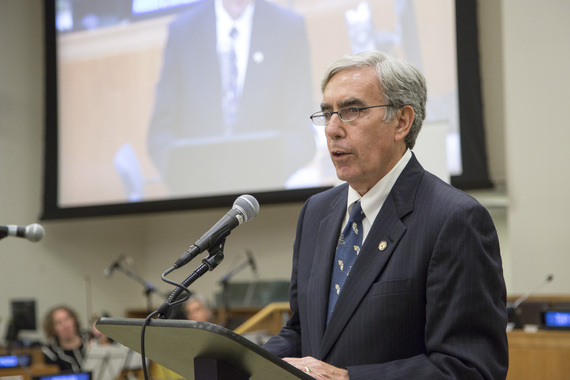 David Krieger is a member of the World Future Council and President of the Nuclear Age Peace Foundation.

What are Americans most misinformed about regarding nuclear weapons? "That nuclear weapons keep us secure. That's absolutely wrong," Krieger says. For 68 years, says Krieger, ever since the atomic bomb drop on Japan, the U.S. has credited nuclear weapons with keeping the peace.

"It's a very dangerous position. To me it's like someone jumping off the one hundredth floor of a building and getting to the sixty-eighth and saying, 'Yeah, everything is still fine.' You know they are headed for trouble and in the U.S. I think we are headed for trouble," Krieger says. Polls indicate a majority of Americans favor eliminating nuclear weapons in the world. "Obama just talked about leadership on this issue and got a Nobel Peace Prize. He needs to do something now to earn that prize, something more than he's done," Krieger says.

The Treaty of Tlateloco was hammered out in the aftermath of the frightening Cuban Missile Crisis of 1962, and resulted in the first Nuclear Weapons Free Zone (NWFZ) in a highly populated area, i.e. Latin America and the Caribbean. Since then other NWFZs have materialized in the South Pacific, Africa, Southeast Asia and Central Asia. In addition, a proposed NWFZ in the Middle East has been on the drawing board for years though regional politics have stymied that effort. However, Alyn Ware, who represents Parliamentarians for Nuclear Non-Proliferation and Disarmament and is also a member of the World Future Council, is convinced that what happened in Latin America can happen in the Middle East. He points to history and says decades ago when the idea of a NWFZ in Latin America was first raised many people were more than skeptical.

"You have Cuba is in this relationship with the Soviet Union; Brazil and Argentina have their own nuclear programs going; there are conflicts in the region; there's Superpower politics; we don't think it's possible, but here it happens," Ware says.

The Treaty Tlateloco prohibits all nuclear weapons from the Latin American and Caribbean region and also provides a negative security agreement. This is a pledge by five nuclear weapon states, including the U.S., the U.K., France, Russia, and China not to use or threaten to use nuclear weapons against the Parties to the Treaty. The upshot is Latin America is now a part of the world that is most secure from a regional nuclear conflict and because of that is able to expend its resources on social and economic development rather than nuclear arms. Can it serve as a prototype for the Middle East? Ware says, "That's the good thing about these examples. They show that even with difficult political relationships these policies can be adopted and implemented."

Helen Young is producing a documentary film about a community of peace activists in the Pacific Northwest who are waging a campaign against nuclear weapons stockpiled at a local US Navy base.