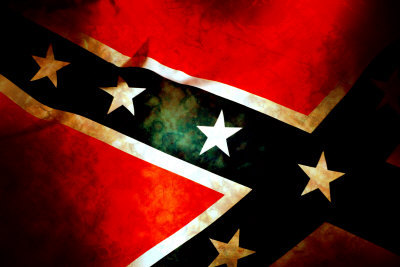 Oh, say, can you see, by the dawn's early light
What so proudly we hail'd at the twilight's last gleaming?
Whose broad stripes and bright stars, thro' the perilous fight,
O'er the ramparts we watch'd, were so gallantly streaming?
And the rockets' red glare, the bombs bursting in air,
Gave proof thro' the night that our flag was still there.
Oh, say does that star-spangled banner yet wave...

"The Star Spangled Banner", also known as America's National Anthem, is one of the most beloved, well-known songs in our country and is sung every day in our great land from sea to shining sea. The song is a symbol of American military success, as well as national pride and the endurance of the American spirit. Look at a Confederate flag and sing the same words. That is what the people who fly the Dixie flag throughout this country feel about their "national" symbol. Isn't it interesting that not one word of our National Anthem has to be changed to make the song apply to the racist symbol?

Finally the Confederate flag flying over the South Carolina statehouse was ceremoniously taken down. Not unceremoniously, but ceremoniously. The flag, those who fought under it, and those who believe in what it represents, were fully honored as it was removed. The flag was not ripped down, it was ceremoniously lowered, furled and taken to a museum of Confederate relics. The ceremony itself was the final insult to every African American in the United States. There was no shame displayed as the flag was taken down, simply honor. An honor guard, the same one from South Carolina State Senator Pinckney's funeral. All the honor that should be rightfully reserved for our national flag. Why was there any ceremony at all? What would have been appropriate was for the flag to be taken down under the cover of night. So America could give proof through the night that the flag was not still there. That would have been an appropriate removal.

Political pundits, media talking heads, as well as regular American people, have all been amazed at the speed at which the Confederate flag was taken down. A narrative that does not ring true. When the Confederate flag was raised over the South Carolina statehouse in defiance of the civil rights movement in 1961, it silently said "and the banner yet waves." Stating whatever you may accomplish in achieving equality for African Americans, our racist banner yet waves and will continue to wave. The flag supporters were right for over sixty long years. The Confederate flag removal has been anything but fast.

Fast was how Germany swiftly repudiated the Nazi flag after World War II. German law prohibits the distribution or public use of symbols of unconstitutional groups, in particular, flags, insignia, uniforms, slogans and forms of greeting. Congress perhaps we should pass a similar law, after all the Confederate flag represents a treasonous, unconstitutional group from our history. That would put this issue to rest forever. Yet Congress is debating whether the symbol can be flown in a host of government funded places like cemeteries. Over 150 years after the Confederate flag was first displayed, we are still debating its use. Fast? I don't think so.

Congress, pass a law that prevents the display of the symbol so I don't have to feel unwelcome anywhere in America. The concept worked well within Germany and it could also in our country. You would never hear a German politician defend the Nazi flag as a proud part of his or Germany's heritage. Our lack of swift action concerning the Confederate flag allows American politicians to do so proudly. And the banner yet waves.