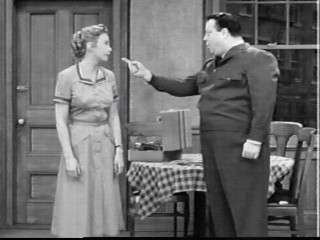 Seriously, let me know if it's me. But I keep finding sexist Hillary Clinton bashing everywhere I turn. Like this from Maureen Dowd's latest column:

Others do not underestimate her relentlessness. As Leon Wieseltier, the literary editor of The New Republic, once told me: "She's never going to get out of our faces. ... She's like some hellish housewife who has seen something that she really, really wants and won't stop nagging you about it until finally you say, fine, take it, be the damn president, just leave me alone."

Damn, not a hellish housewife! They're the WORST. Man, can you imagine if one got to be PRESIDENT?

You know, I have no problem with Hillary-bashing — on the merits. Get her on her record, get her on her substance, get her on her health plan, get her on her Iraq war vote. Go crazy. But today the NYT has stooped in two places to zeroing in her with criticisms that turn completely on the fact that she's a woman. "The Cackle?" So would never be applied to a man. We all know it. (And yes, to be sure I actually Googled "Giuliani" and "cackle" and there are definitely some results, because cackling is not only the provence of women, and in these instances the word is being used by protective Ron Paul supporters, so grain of salt. But when a man is said to cackle it is a far more specific type of sound and behavior, and for a man's laugh to be termed "The Cackle" it would really have to actually have a specific sound. Hillary's actual laugh is described as being "a hearty belly laugh" with "fullness and depth" — hardly the "harsh" and "sharp" sound that Merriam Webster describes a cackle as being.) 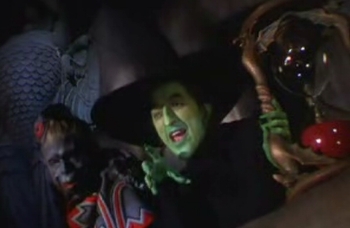 And now Dowd — ever the sista — jumps on the bandwagon, eschewing substantive commentary for a glib turn of phrase (I'd guess that Maureen Dowd has probably "sashayed" just as often as Hillary Clinton). In her view, longevity = "relentlessness" (so watch it, any woman who's had the temerity to be in an industry for longer than a decade, moving up's a bitch and apparently so are you). It's just not enough to ground a column on nepotism — it tells us nothing we don't already know (Wow, Bill and Hill are married? And they help and support each other publicly? You don't say!). It gets interesting anytime Dowd starts talking about the discipline of the campaign — the softening rationale behind the laugh, the rumored tit-for-tat deal with GQ — but the analysis behind it is sadly lacking. Instead, we get "from nag to wag," and the dismissal of Hillary as being the mere byproduct of Bill (with no nod, of course, to however she may have contributed to her husband's earlier ascendancy). It's just glib, vague criticism which could well be true but certainly is not for her having proved it (and a supporting quote from a frequent go-to doesn't cut it). That would be troubling on its own, but the nagging housewife riding on her husband's coattails imagery — a compound stereotype for your reading pleasure! — well, that takes it from insubstantial to irresponsible.

The NYT should know better than this, can do better than this, especially in an election with the first female candidate. If Hillary Clinton is so awful — fine, great. Go ahead and prove it — on the merits. A good argument should need nothing else.