Perspective plays such an important role in our lives. Although the first optical microscopes were built in the early 17th century, it wasn't until the publication of Giambattista Odierna's ground-breaking work, "L'occhio della mosca (The Fly's Eye)" in 1664, that a detailed description of how living tissue was constructed appeared in print. Since then, microscopy has led to a continued exploration of microorganisms.

When Apollo 8 was launched on December 21, 1968, (more than 300 years after Odierna's findings were published), its crew became the first humans to witness Earthrise from outer space and see Earth as an entire planet. Looking back on the experience, Commander Frank Borman II stated:

"I think the one overwhelming emotion that we had was when we saw the Earth rising in the distance over the lunar landscape -- it makes us realize that we all do exist on one small globe. For from 230,000 miles away, it really is a small planet. The view of the Earth from the Moon fascinated me -- a small disk, 240,000 miles away. It was hard to think that that little thing held so many problems, so many frustrations. Raging nationalistic interests, famines, wars, pestilence, don't show from that distance. When you're finally up at the moon looking back on Earth, all those differences and nationalistic traits are pretty well going to blend, and you're going to get a concept that maybe this really is one world and why the hell can't we learn to live together like decent people."

From such a distance it's impossible to focus in on situations involving rape, sexual taboos, political assassinations, and television soap operas. However, when such stories are adapted for the stage, seething passions, burning betrayals and personal crises (real or imagined) take on a much greater sense of urgency.

Two Bay area theatre companies recently invited their audiences to peer through a dramatic lens and witness combustible dramas with the objectivity of a scientist watching microorganisms on the surface of a glass slide. Because both plays were adaptations that include elements of magical realism, some things were able to be seen with crystal clarity; others were a big hot mess.

First performed at the Deutsches Theatre in Berlin on January 12, 1895, Henrik Ibsen's drama entitled Little Eyolf is getting a new lease on life from the Aurora Theatre Company, which recently presented the world premiere of Mark Jackson's terse adaptation entitled Little Erik. While Ibsen's basic characters remain the same, the issues they confront in Little Erik demonstrate how a 120-year-old drama can become painfully relevant to a modern audience in the hands of a skilled playwright. As Jackson explains:

"Nature demonstrates that quality takes time, that dirty air makes a sunset more beautiful, that every so often lightning needs to burn the forest down so new life can grow. There is something dispassionately passionate about nature -- its patience and its brutality. Human beings over-complicate things. Our complications are like the layers of dead leaves on the forest floor, choking new possibilities. Sometimes it takes a disaster to wake us up to what's under our noses. This clash between human expectations and the brutal patience of nature felt very alive in what Ibsen wrote." 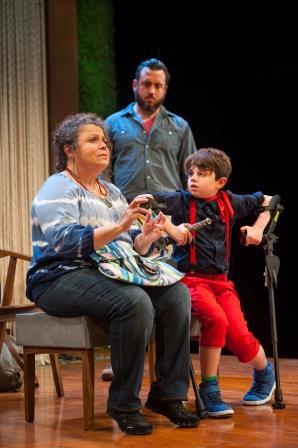 "Because Ibsen's original was so unbelievably melodramatic, I felt it would be more effective to take the bones of his plot and the blood of his themes and put them in a contemporary body. Everything in the play was pitched at such a hysterical level. I almost couldn't take it seriously. But as I read it, the situations and emotions felt, undeniably at times, shockingly current. I was really struck by how frank some of the characters were. The female lead was very upfront about her sexual needs. The class issues at work felt very familiar. Even the undercurrent of surrealism seemed somehow in touch with our contemporary culture and its daily explosion of strange images." 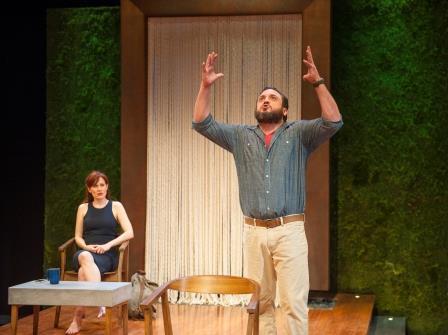 The drama is primarily focused on two couples whose lives are intertwined in ways they can barely comprehend. 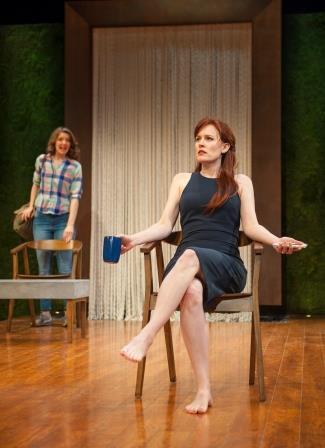 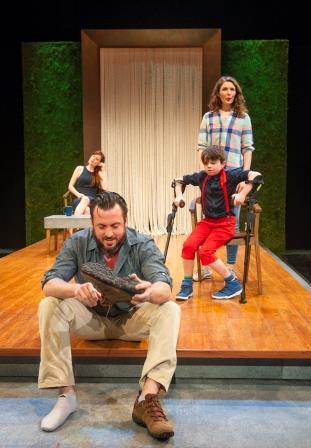 Erik's subsequent drowning (accompanied by a shocking revelation) leads to a critical meltdown for Joie (who must grieve for the child she never wanted to have), Freddie (who must contemplate living without Joie's financial support), and Andi (who must fend for herself, even if it means crossing the Pacific Ocean to escape an emotionally volatile and cringe-worthy situation). 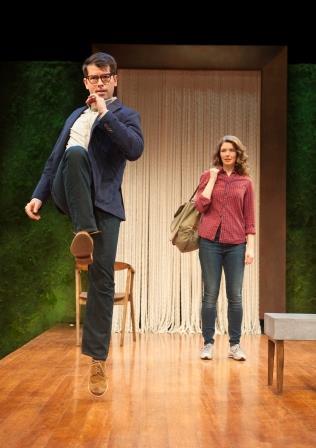 Jackson has directed his adaptation of Ibsen's play with a crisp and terse approach which balances the magical realism of the Rat Wife with the selfish goals that keep driving Joie and Freddie apart instead of bringing them together. While Marilee Talkington's performance anchors the evening, strong praise goes to Joe Estlack and Jack Wittmayer for their performances as her errant husband and crippled son. As always, Wilma Bonet (an actor who has no trouble commanding the stage), steals the show with minimal effort.

From the playwright's perspective, much of Little Erik revolves around the challenge of defining personal happiness in today's high-tech, materialistic world. As Jackson notes:

"There's a great deal of pressure in society for everyone to be really, really impressive in a very perfected way. It's so unrealistic and, even though anyone would say they know that, still we succumb to these expectations. I personally can't reconcile any of this with the kinds of things I see in nature." 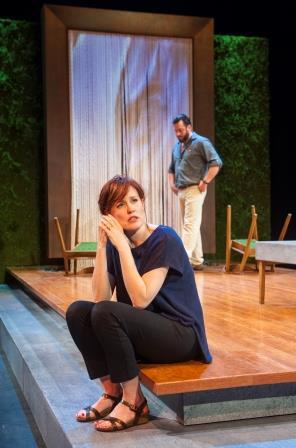 I wish I could be as enthusiastic about the Magic Theatre's production of Dogeaters, but the harsh truth is that there were many moments during the show when I found myself thinking "This is boring." In fact, the play's opening night performance was one of the few times I've been in a theatre where the audience's reactions were so markedly divided. 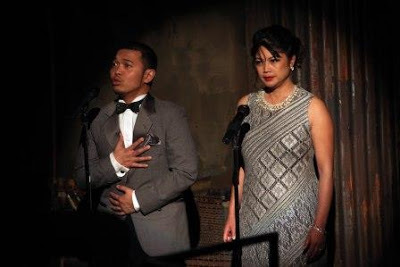 Because Dogeaters unravels against a backdrop of political corruption in the Philippines over the course of several decades, there are numerous flashbacks as Rio Gonzaga (Rinabeth Apostol) arrives from the United States to visit her family. 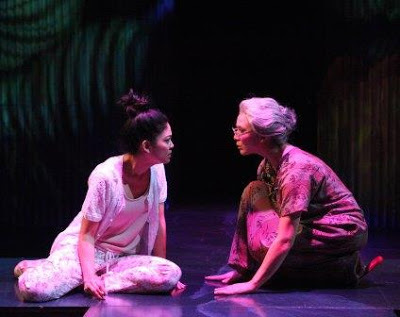 Unable to make it to Manila in time for the funeral of her beloved grandmother, Lola Narcisa Divino (Charisse Loriaux), Rio is met at the airport by her father (Chuck Lacson) and her celebrity-crazed cousin, Pucha (Julie Kuwabara). During her visit, Senator Domingo Avila (Ogie Zulueta) is assassinated, Rio has a visit with her grandmother's ghost, and tracks down two gay men -- Andres "Perlita" Alacran (Jomar Tagatac) and Chiquiting Moreno (Melvign Badiola) -- whom she remembers from her childhood.

While corruption reigns supreme (the bodies of 169 workers killed during construction of the Manila Film Center were buried under cement), it plays out differently in various levels of Filipino society. In one the most glamorous examples, drunken sexpot and film star Lolita Luna (Charisse Loriaux) portrays the mistress of married businessman Severo "Chuchi" Alacran (Chuck Lacson). 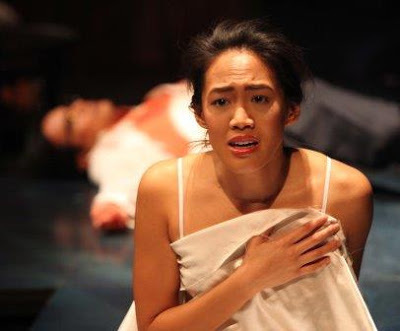 After winning the Miss Philippines contest, Daisy Avila (Christine Jamlig) becomes romantically involved with a notorious leftist named Santos Tirador (Mike Sagun), who is summarily killed by the authorities. After being raped by General Nicasio Ledesma (Jomar Tagatac) and his soldiers, Daisy escapes and joins a rebel army in the mountains.

Joey Sands (Rafael Jordan) is the unwanted child of a Filipino woman and African-American soldier who grew up in poverty and is working as a DJ while battling problems with substance abuse. Although he works at the famous CocoRico club under the beady eyes of its drag queen owner, Perlita, Joey is frequently pimped out to foreigners and visiting celebrities by his adoptive Uncle (Ogie Zulueta). During the film festival, he ends up becoming an exotic boy toy for filmmaker Rainer Fassbinder (Lawrence Radecker). However, after witnessing the assassination of Senator Avila, Joey becomes a fugitive who must rely on Perlita's underground connections in order to save his life. 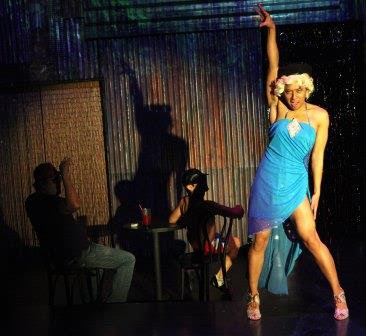 Jomar Tagatac as Perlita in Dogeaters (Photo by: Jennifer Reiley)

In supporting roles, Carina Lastimosa Salazar appears as Trinidad "Trini" Gamboa, a young woman who falls in love with the equally virginal Romeo Rosales (Jed Parsario), an aspiring actor who believes that his looks will open doors. Parsario also shines as a luckless waiter who must ask customers whether they wish to order fresh or canned fruit and as Perlita's deformed servant, Pedro. Perhaps the best written scene in the play is the one in which reporter Bob Stone (Lawrence Radecker) attempts to interview the Philippines' wily First Lady, Imelda Marcos (Beverly Sotelo), to no avail. 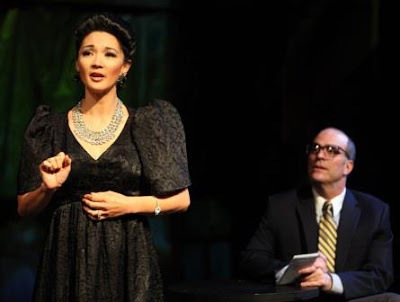 First published as a novel, a stage adaptation of Dogeaters was workshopped at the 1997 Sundance Theatre Program with Magic Theatre's Loretta Greco and author Jessica Hagedorn joining forces to make the story theatrically viable. Both women remember the experience as a labor of love. As Hagedorn recalls:

"When the play was done in New York by the Public in 2001 and did so well, my dream was that someone in San Francisco would pick it up. There's such a huge Filipino community here and the play would have such resonance for them. Plus, San Francisco is where my mother and I relocated from Manila, and where I came of age as an artist. This time around, the really exciting thing for me is that I get to reimagine certain scenes in the play, even write some new ones, and somehow (after all these years) the play remains relevant." 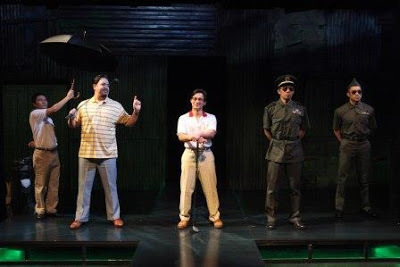 Chuck Lacson as Severo "Chuchi" Alacran and Ogie Zulueta
as Senator Domingo Avila in a scene from Dogeaters
(Photo by: Jennifer Reiley)

While the Magic Theatre's production of Dogeaters benefits immensely from Hana Kim's scenic and projection design (as well as Brandin Baron's costumes and Sara Huddleston's sound design), it left me cold.

Unfortunately, by the end of the evening, I realized that (perhaps because I had not read Hagedorn's novel), I did not care about a single character onstage. That's a real problem. 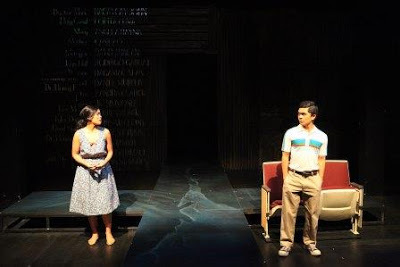 Carina Lastimosa Salazar as Trinidad Gamboa and Jed Parsario as
Romeo Rosales in a scene from Dogeaters (Photo by: Jennifer Reiley)

While I especially enjoyed Beverly Sotelo's characterization of Imelda Marcos and Charisse Loriaux's portrayal of Lola Narcisa Divino, the strongest (and most versatile) performances were delivered by Jomar Tagatac, Ogie Zulueta, Jed Parsario, and Melvign Bediola.