I've never been big on parades. Crowds of people crammed together, inevitably sweating or freezing, no one under six feet tall getting a good view. But from the comfort of my parents' kitchen, the Macy's Thanksgiving Day Parade is a tradition even I don't like to forgo. I don't get up early to watch, but with my whole family crowded into the one room, all vying for counter space or the good knife, it's the only acceptable accompaniment.

The parade attracts over 3.5 million people to the often frigid streets of New York, plus over 50 million people who watch the performers and balloons from home. But no matter whether these observers are avidly engrossed or peeking up from their poultry prep, all of them are absorbing one simple fact: from cartoon cats to historical heroes, there aren't many female figures floating by. 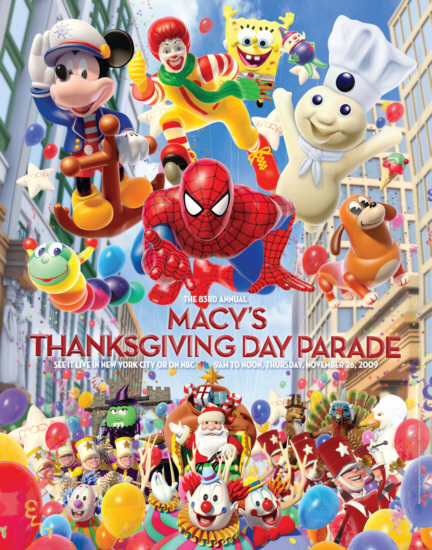 Holidays are an obnoxious time to pick a fight. The holiday spirit implies not kicking your brother under the table and leaving partisan politics outside the dining room so your relatives can digest their meal in peace. But not everyone can afford to take the vacation.

On November 10 of this year, Lynnette Long, president of Equal Visibility Everywhere--a not-for-profit charmingly acronymed EVE--published a blog on the astounding under-representation of female characters among the Macy's parade balloons. For a few key feminists, despite the holiday, it was a call to action.

In the 84-year, 129-character history of the parade, only 10 female characters have ever sailed down the avenues. "Parade balloons are not a trivial issue," said Long. "Every year millions of young girls eagerly attend Macy's and other parades, only to look up and see nothing but male characters float by." Long concluded with a latent call for action: "Hopefully, one day, the parade skies of the United States will be filled with an equal number of male and female characters."

But the call didn't stay latent for long. The blog post got the attention of Lyn Mikal Brown at Hardy Girls Healthy Women, a nonprofit devoted to the health, well-being, and empowerment of girls and women. HGHW, in turn, reached out to SPARK, a newly formed coalition of feminist organizations helmed by Deb Tolman, a professor at Hunter College. SPARK had its first event right before Halloween, a conference I attended and wrote about.

For every holiday there could probably be an anti-holiday of feminist grievances. SPARK's first event was timed to raise consciousness about the sexualization of Halloween costumes for women and girls. Now it's the lack of women in the Thanksgiving Day parade. I suppose you could ask what's next? An awareness day for Mrs. Claus? St. Valentine's girlfriend? The Easter Bunny's mom? In some ways, the last thing even I want with the turkey is a side of feminist frustration.

But the truth is, the lack of visibility of women and girls in our culture and the media--while a year-round issue--is more insidious during the holidays. These are the moments for the stories we love, the characters we identify with and want to celebrate. If the characters are overwhelmingly male, what do we internalize about who matters?

This isn't just important for young girls: how we see females portrayed and whether we see them featured at all affects how boys and men--how all of us--understand and relate to girls and women.

So SPARK decided to step up the call for equal balloon representation and set a date for the goal. How's 2012 sound?

The answer is up to Terry J. Lundgren, CEO of Macy's, Inc, and the designated recipient of SPARK's petition demanding balance among the balloons. Maybe it's up to you, too, if you want to sign.

"This isn't just about the Macy's Day Parade," says Brown. "This is part of a larger pattern of girls underrepresented in the media."

"The parade is a concrete way to see the issue," explains Tolman.

The ability to pick up on this item and run with it is central to SPARK's mission: to create a feminist network. By connecting big organizations with small ones, SPARK lends the power of a greater voice to grassroots groups that are not encased in bureaucracy and therefore may be more creative with their energies.

Like the can of cranberry sauce that's sitting directly in the center of the shelf, often the most difficult issues to see are the ones that are right in front of us. But just recognizing them is perhaps the most important step toward change.

There's no good reason why female characters can't be equally represented in the Parade. True, the lack of parity reflects the general state of the media, but with a history of only 129 balloons total, it doesn't seem like a lot to ask. Given TV, books, movies, and all of history, I think most of us could come up with 64 characters to fill the ranks. Who knows... maybe even 65.

Which women, girls, and female characters would you like to see in The Macy's Thanksgiving Day parade? Post your ideas in the comments section below!