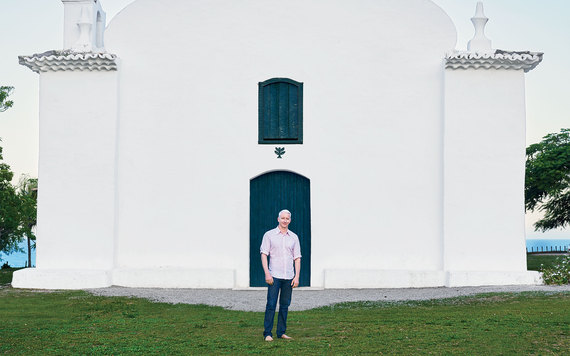 It didn't take me long to fall for Trancoso--just a couple minutes, in fact. It was two years ago, my first trip. I'd only just arrived and it was nearly dusk. After dropping off my bag in the bedroom of the old fisherman's house I was staying in, I walked outside and sat in a wooden chair on the edge of the town square, called the Quadrado, a five-acre grass field that has been the heart of the village for more than five centuries. Some 50 former fisherman's houses line two sides of the Quadrado. The one I was staying in was painted a vibrant blue, and there were thick vines of red bougainvillea climbing up to its ceramic-tiled roof. To my right, near a cliff overlooking the sea, was a nearly 500-year-old whitewashed church, one of the oldest houses of worship in all of Brazil. In front of it, a dozen or so teenagers played soccer barefoot, an impromptu game full of laughter and shouts and good-natured arguments. Several horses grazed languidly nearby.

On the other side of the Quadrado, directly across from where I sat, a woman braided what I assumed to be her young granddaughter's hair. Outside another house, one of several that have been converted into restaurants, waiters prepared tables for the evening meal, illuminated by a handful of small yellow lights that hung from an old tamarind tree. There was bossa nova music coming from another restaurant farther down. A young man sang, accompanied by a lone guitar. Sitting there, just watching and listening: that's when I fell in love with Trancoso, and when the idea of finding a home there began. I felt so completely unplugged, disconnected from the reality of my own life. I had no desire to check my phone or e-mail, no thoughts of being anywhere else. All I wanted was to sit there in dusk's dwindling light, watching this simple, stunning place quietly hum with life. 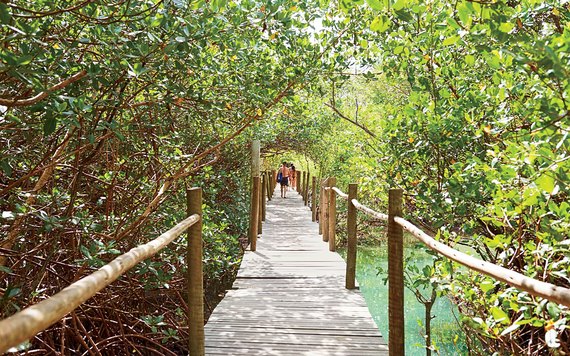 Magical is the word people most often use to describe Trancoso. I understand why, but that word always makes me wince. I don't quite trust it. The first time I visited Brazil in 2001, a friend in Rio kept telling me how magical Trancoso was. "You can feel the heartbeat of the earth on the Quadrado," he said. That stopped me from visiting for more than 10 years. It wasn't just my inherent skepticism. There were so many other places in Brazil I wanted to explore: Rio, São Paulo, Salvador, Manaus, the Amazon. The only reason I wound up in Trancoso is that my friend Andy Cohen, whom I would be traveling with along with my partner, Benjamin, and our friend Pablo, wanted to go somewhere quiet with a beach. As you may have guessed from my paleness, a beach is rarely high on my list of destinations. I also get bored quickly, and though I love the ocean, I can only stand so much sand and sun.

More from T+L: These are the Friendliest Cities in America

Trancoso is not the easiest place to get to--a 13-hour trip from New York including a several-hour layover in Rio or São Paulo. There wasn't even a paved highway there until 2000, which is probably one of the reasons it's been able to resist many of the pitfalls of development. That and the fact that hippies arrived before developers and met a local population who were very connected to their traditions. Together they instituted stringent environmental laws that restrict how new structures can be built on the Quadrado.

When we first reached Trancoso, it seemed like a mistake. We turned off the highway from Porto Seguro, the nearest airport, and entered the newer part of town, which is not much different from many other small urban centers in Brazil. Andy became suddenly very quiet as we passed block after block of cement storefronts selling electronics and motorbikes. I worried I'd made a huge mistake dragging my friends here--that is, until we got to the entrance of Uxua Casa Hotel, where I had made reservations.

More from T+L: How to Enjoy Europe with the Kids (Really!)

Uxua was opened in 2009 by Wilbert Das, the former creative director of Diesel. It is made up of a dozen beautifully proportioned private casas, some new, some colonial fisherman's houses that Wilbert restored using reclaimed wood, Brazilian antiques, and work by local artisans.

The beach is a few minutes' walk downhill from the Quadrado, and the last hundred yards or so you cross a wooden footbridge that goes through a thick growth of mangroves. As you walk down the sun-bleached planks, red crabs scuttle for cover underneath. Trancoso's beaches, like many in the state of Bahia, are remarkably undeveloped. The forest meets the sand, and there are long stretches where you don't see a soul. A few small hotels are hidden here and there, almost impossible to see from the shore. There are no large resorts, no cruise ships docking. The ocean is warm and blue. Even at night I've walked down to the beach and plunged headfirst into the waves.

For several weeks around December and January, wealthy and stylish Brazilians flock to Trancoso. It's not my favorite time of year to be in town, but it does add a dose of glamour and energy that is a stark contrast to the rest of the year. If you are looking for St. Bart's, you won't find it here. St. Bart's is undeniably beautiful, but there's too much money, too many boldfaced names, too many people wanting to be invited to someone's party. It's hard to find the real life of the place. But in Trancoso real life is all around you. You hear occasional squabbles in the homes of families you are staying near, you hear celebrations, kids laughing and crying. Easter weekend you can join a congregation from the church as they walk the stations of the cross, or stand in a circle of capoeira fighters as they practice accompanied by drums and songs. I'm told someone once tried to open a nightclub on the Quadrado, with bouncers and a velvet rope. It closed after a few weeks. It's just not that kind of place. 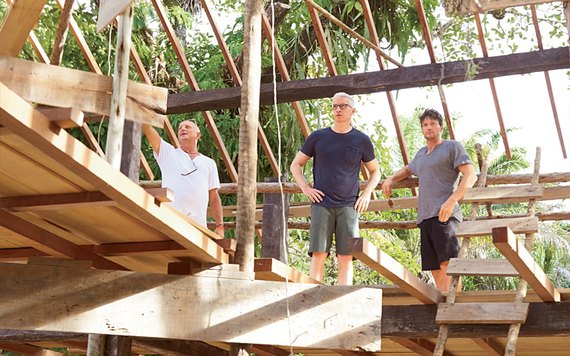 I have no illusions about Brazil, about the harsh reality of life for many of its citizens, or the potential for development to destroy all the things that generations of residents in Trancoso have tried to preserve. The problems that Brazil faces are many: economic uncertainty, lack of investment in infrastructure, widespread poverty. In Rio, I've had run-ins with corrupt cops who pulled me over and wanted a bribe. When I refused, I ended up being strip-searched in a police station. None of that has stopped me from falling in love with this place.

I went back a few months after my first visit, and Wilbert began to show me the few properties for sale on the Quadrado. They hardly ever come available. A couple of months later, one of the last unbuilt parcels on the Quadrado went on the market--a long plot of land with enormous trees that I would have to construct several bungalows around. The last thing I wanted to do was get involved in a construction project, and I knew it was impractical to build a house there. I don't speak Portuguese, not yet anyway, and I hardly ever take time off from work. But after Wilbert agreed to design the house and oversee construction using the same talented craftsmen who had helped him build Uxua, I decided to go ahead. The simple reason is that after traveling to some 70 countries over the past 23 years, I haven't found any place to match Trancoso. And I didn't like the idea of someone else's buying one of the few pieces of empty land left on the Quadrado and building something that didn't fit with the place and its people.

There is much I have to learn about Trancoso, and I don't pretend to speak for the people there, but I'm excited that soon I will be a caretaker of a small part of it. I will probably rent out the house for much of the year, and I hope the people who come are the kind of visitors who will appreciate the character of this place. I hope they will fall in love with Trancoso as it is and as it wishes to remain.

More from T+L: 5 Beauty Tips Every Traveler Should Know

I know it doesn't make sense to build this house, but not everything has to make sense. Sometimes when I'm far away in the world, working on assignment, surrounded by conflict and chaos, I close my eyes and if I pay attention to the rise and fall of my breath, the beat of my heart, I begin to hear the sounds of Trancoso: quiet, distant music drifting across the Quadrado on a warm summer night.