Anderson Cooper has gone one step further than his trademark tight t-shirt: he's tweeted a picture of himself shirtless and covered in mud.

Cooper tweeted the snapshot of himself in an unnamed location on Monday night, and asked his followers to guess where he was. So far, all that's known is that he's not at a spa and is "nowhere near" the Dead Sea.

The world has, of course, seen Cooper shirtless before, when he swam with Michael Phelps for "60 Minutes." Judging from the latest picture—and the slight neck-shoulder ridge thing so common in fitness buffs that he seems to have developed—Cooper has bulked up a bit since then.

If we could just sprinkle some light analysis to this affair, it's worth mentioning that Cooper's daytime talk show is due to start in less than two months. Is this a preview of the lengths he's willing to go now that he's becoming a full-fledged daytime personality?

See the picture, and tell us where you think Cooper is tweeting from. 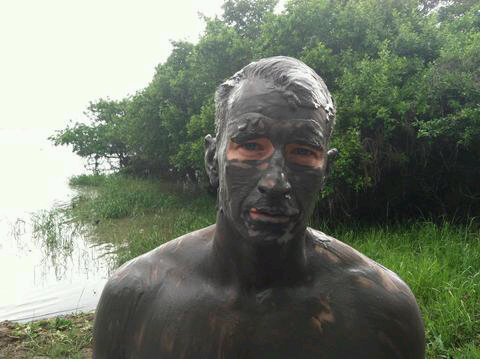