Anderson Cooper is launching a bold, risky new chapter in his career on Monday, as his daytime talk show finally premieres.

"Anderson" has been in the works for a year, but viewers will, at last, get to see whether Cooper can make it in the highly competitive daytime world when his show debuts on Sept. 12. The CNN host has been on a wide publicity campaign over the past couple of months, relentlessly sending the message that he was eager to showcase a different part of his personality. In separate interviews with the New York Times and USA Today on Monday, Cooper again sounded that theme.

It is, in some ways, a stretch to say that Cooper's lighter side hasn't gotten an airing. After all, he's co-hosted "Regis and Kelly" a whopping 32 times, made no secret of his devotion to the "Real Housewives" shows, and has made Kathy Griffin his most famous on-screen partner. In addition, his "Ridiculist" segment on his CNN show has featured him doing everything from mocking Snooki to giggling over bathroom puns.

Still, it's absolutely the case that Cooper is more well-known for being in the middle of huge news stories than speaking to Sarah Jessica Parker (one of his first guests). And the talk show market is both heavily saturated and littered with past news personality failures (Jane Pauley, anyone?). But Cooper has already landed some buzzy guests (Amy Winehouse's family and the Real Housewives of Beverly Hills are both slated for the first week) and the talk show field is relatively clear of any major new competition for now. Cooper and the media world will, of course, be watching closely to see how many people tune in to see him show off what, in his words, he called his "more silly and frivolous" side.

UPDATE: The show began with a shot of Cooper introducing the day's topic (Amy Winehouse) while riding his bike. He then came onto the set and told his audience that he always wanted to have "real conversations" on his program. He quickly introduced Winehouse's family, and mostly stayed out of the way as they told their story. Towards the end of the show, he also went out into the audience to speak to people. Below, see pictures from the show. 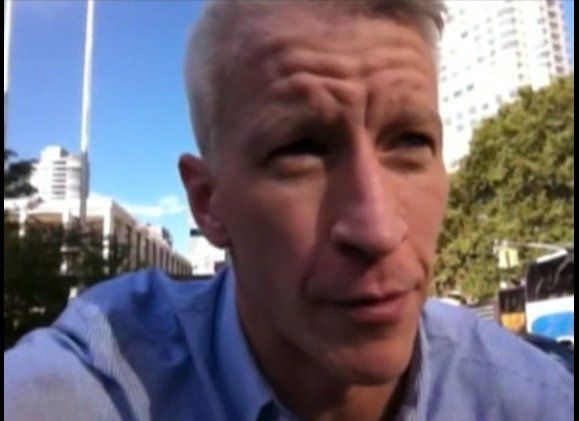