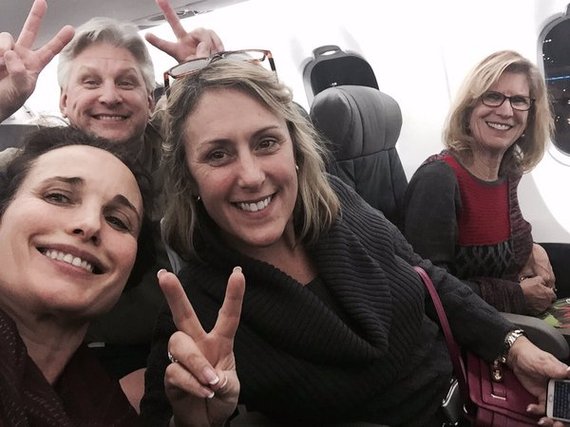 In the tweet heard round the world* this weekend, Andie MacDowell complained that even though she paid for first class, American Airlines sat her in "tourist" class. The internet usually doesn't take kindly to elitism and this was no exception, loading her Twitter feed with a barrage of angry tweets. While the text of her message does seem a bit out of touch, she did attach a smiling selfie with her fellow passengers (see above), so it's clear that she tweeted with light heart. Unfortunately, the internet didn't see it that way. So what can we learn about MacDowell's misstep when it comes to our own social media usage? Three-and-a-half important lessons:

1. Social media is not a diary. As a case in point, I have a very good friend who use social media as a constant update of his political position. I don't know why I need all those updates because his position never changes and I've never seen anyone comment on his posts that their ideology has suddently changed. The irony is that he is so much more than the brand he puts out there on social media: He is a good person with interesting things going on in his life, but for some reason he only posts his political thoughts. This sort of linear behavior gives your personal brand a hit because even though you might be a pleasant person with a variety of interests, the world only sees you as one dimensional.

2. Choose your words carefully. MacDowell's use of the word "tourist" is what struck a nerve with most folks. Is that word offensive? Absolutely not. But using "tourist" makes her sound like she's be living in her ivory tower so long that the word "coach" had completely left her lexicon. Semantics matter when it comes to social media so make sure you're using your words wisely. For example, sarcasm might not be clear in a social post... and I'm not writing that sarcastically... or am I? See, you can't tell!

3. When in doubt, leave it out. I know we live in this 24/7 tweeting world, but maybe sometimes we should keep a few things to ourselves. I have on more than one occasion drafted a tweet and erased it upon re-reading it because I felt like while it might be funny, it might rub someone the wrong way. This was one of those times for MacDowell. If she had just tweeted the picture without text, she would have looked like the most down-to-earth celebrity out there.

And three-and-a-half: You can redeem yourself. The good news of a fast-paced social media scene is that we can post whenever we want and recover from just about any mistake** we make. MacDowell is already getting some positive traction by positively responding to some of her twitter followers individually. And it also helps that we are just days away from Groundhog Day, probably the most famous film that she has done. So it's possible that once we see Bill Murray steal the groundhog and drive it off a cliff, all will be forgiven.

**Some mistakes are not recoverable including but not limited to: robbery, murder or wearing stripes with plaid.